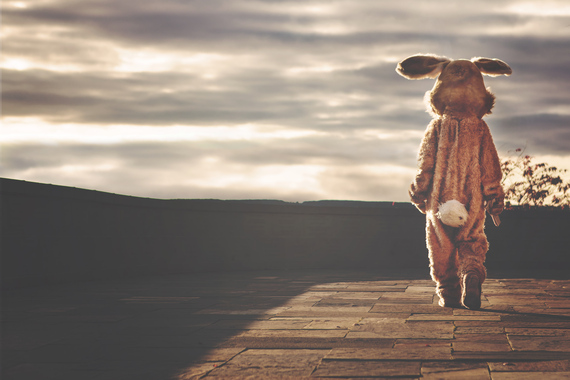 Now that we're fully entrenched in election cycles, there's a lot of talk about the 'middle class'.

Yup, there isn't a politician out there who doesn't consider it a priority... although everyone seems to have very different ideas on how exactly it should be fixed.

But in all the talk of minimum wage hikes and corporate tax cuts, artists rarely get mentioned. It's generally Joe the plumber, or Sue from the assembly line who get their time at centre stage.

DOING WHAT YOU LOVE IS PAYMENT ENOUGH

The starving artist. A cliché so played out it wouldn't even deserve mentioning if it didn't reflect the reality of so many.

It's generally agreed upon that since artists have the luxury of living their dreams, they're signing up for a life of financial struggle. They knew life would be like this, and they chose it anyway.

And you know what the worst part is? We're starting to believe it about ourselves.

I've sat across from too many artists who honestly believe that financial stability is impossible for them. That it just plain can't, and won't get better.

Please allow me to call bullshit.

WHAT IF WE STOPPED WAITING FOR SOMEONE TO SAVE US?

Companies aren't hiring. Companies are paying less than they used to. There aren't any jobs. There are too many people trying to get those jobs. Funding has been cut. Grants have been cut. No one appreciates the arts. No one supports the arts. The arts are dying.

*Runs out of breath*

You can't yell at the sky.

Well... I guess you can, but it's a complete waste of time.

Control what you can control instead of complaining about what you can't, because the latter is just a recipe for being pretty dang unhappy.

There is an insane income disparity in the arts world. Some are incredibly rich (#bradleycooperistechnicallyanartist) and some incredibly poor. But the people I'm fascinated by are the ones in the middle.

The ones who have worked and saved and leveraged a little... into a life.

And there are so many of them. They may not make for sexy headlines (Veteran Actor Pays Off Mortgage. Has Adequate Funds to Retire), but theirs are the stories that we all need to hear.

Now, those lives probably don't look like the white picket fence of the Norman Rockwellian world. They're as unique as the artists who build them.

But they are stable places. Places that allow for the freedom to create. The flexibility to take risks. And provide the support to be happy and healthy.

These artists have realized that they have the power to control their own lives, instead of constantly chasing down the next gig to keep up with a credit card payment.

But I can follow the example of the artistic 'middle class'. I can concentrate on the resources I do have, focusing them to create the kind of life that isn't dependent on the changes that are happening in our industry every day.

A simple, stable world built on the back of my art.

And I hope that you can dream it too... because if we could create a world with a strong artistic middle class... just think of the art we could make!

It's not crazy, we can do this!

Just take a tiny fraction of the creativity and discipline that makes you the rocking artist that you are, and pour it into a new kind of technique.

A technique that allows you to take whatever flow of resources that comes into your hands and leverage it into everything you need.