At stake throughout Honduras, as throughout the world, are indigenous lands, forests, water, minerals, oil, gas, biodiversity, knowledge (otherwise known as intellectual property), rights, and autonomy. Stacked against all these are extraction, "development," and profit by Honduran and international business, with backing from the Honduran government and US military aid. Rio Blanco, a Lenca indigenous community of 400 families, tells one story of plunder, violence, and resistance.

We regret that we are unable to give credit to the co-creator of this photo essay and of our last article on Rio Blanco, because of the danger to his life. We salute our collaborator, indigenous communities, and others in Honduras who risk their lives every day to protect human beings, the earth, the global commons, and indigenous territories. 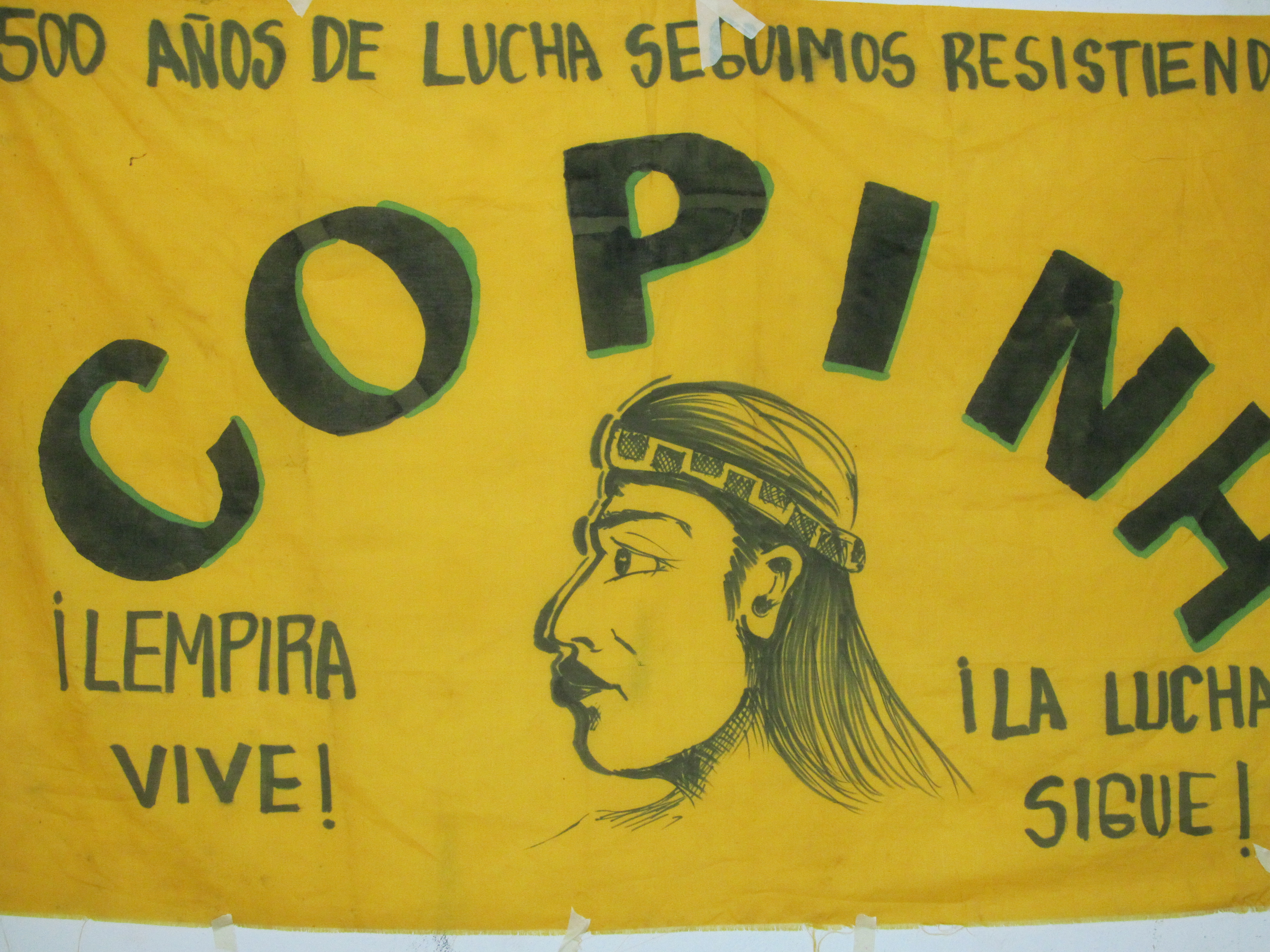 Defending Lenca lands. A flag in a community center of the Organization of Popular and Indigenous Organizations of Honduras (COPINH) shows Lempira, the Lenca chief who led the resistance to Spanish colonists in the 1530s. The text reads: "500 years of struggle, we will continue resisting. Lempira lives! The struggle continues!" 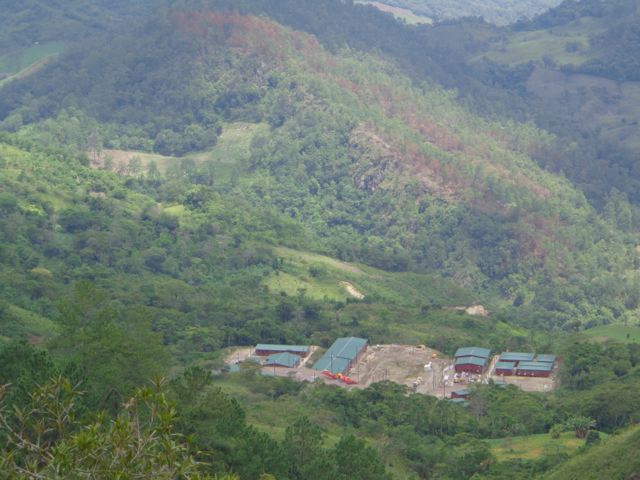 This installation was installed illegally on the sacred Gualcarque River in Rio Blanco by the Honduran-owned, foreign-supported damming company DESA. The complex has been base of operations for building and running a dam in the community. The installation was constructed against the will of Rio Blanco's inhabitants, in violation of the UN Declaration on the Rights of Indigenous Peoples and International Labor Organization Convention 169, which require that indigenous peoples give free, prior, and informed consent to development projects on their lands. 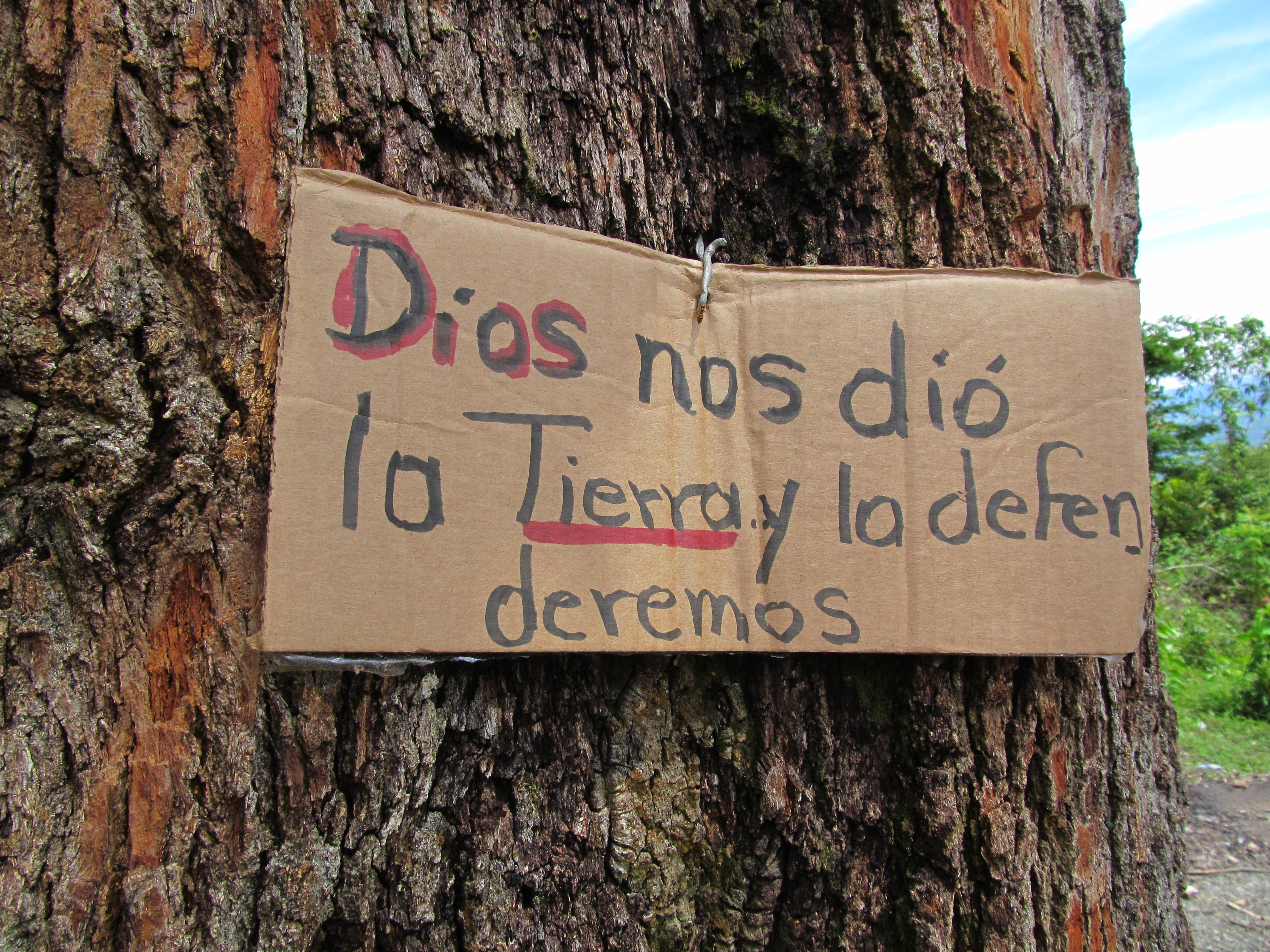 A tree at the entrance of Rio Blanco hosts the message, "God gave us this land and we will defend it." The community of Rio Blanco declared its road closed to the dam construction. It has been blockading access to the company for five months. 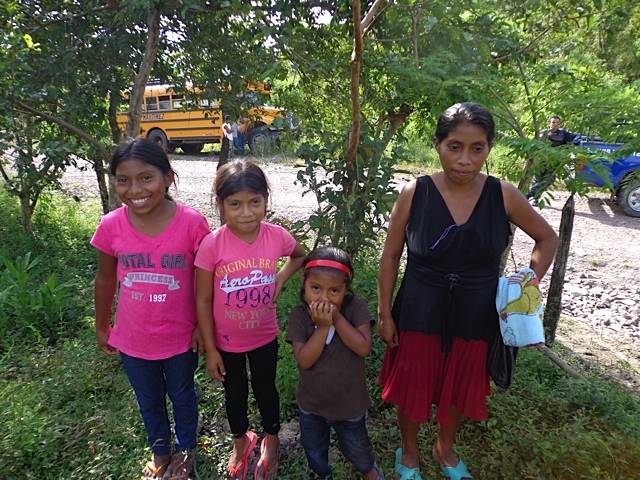 Adelida Sánchez Gómez, shown here with three of her children, explained, "We are standing up for our own rights. Our ancestors left the land to us. Here we are born, here we live, and here we die." 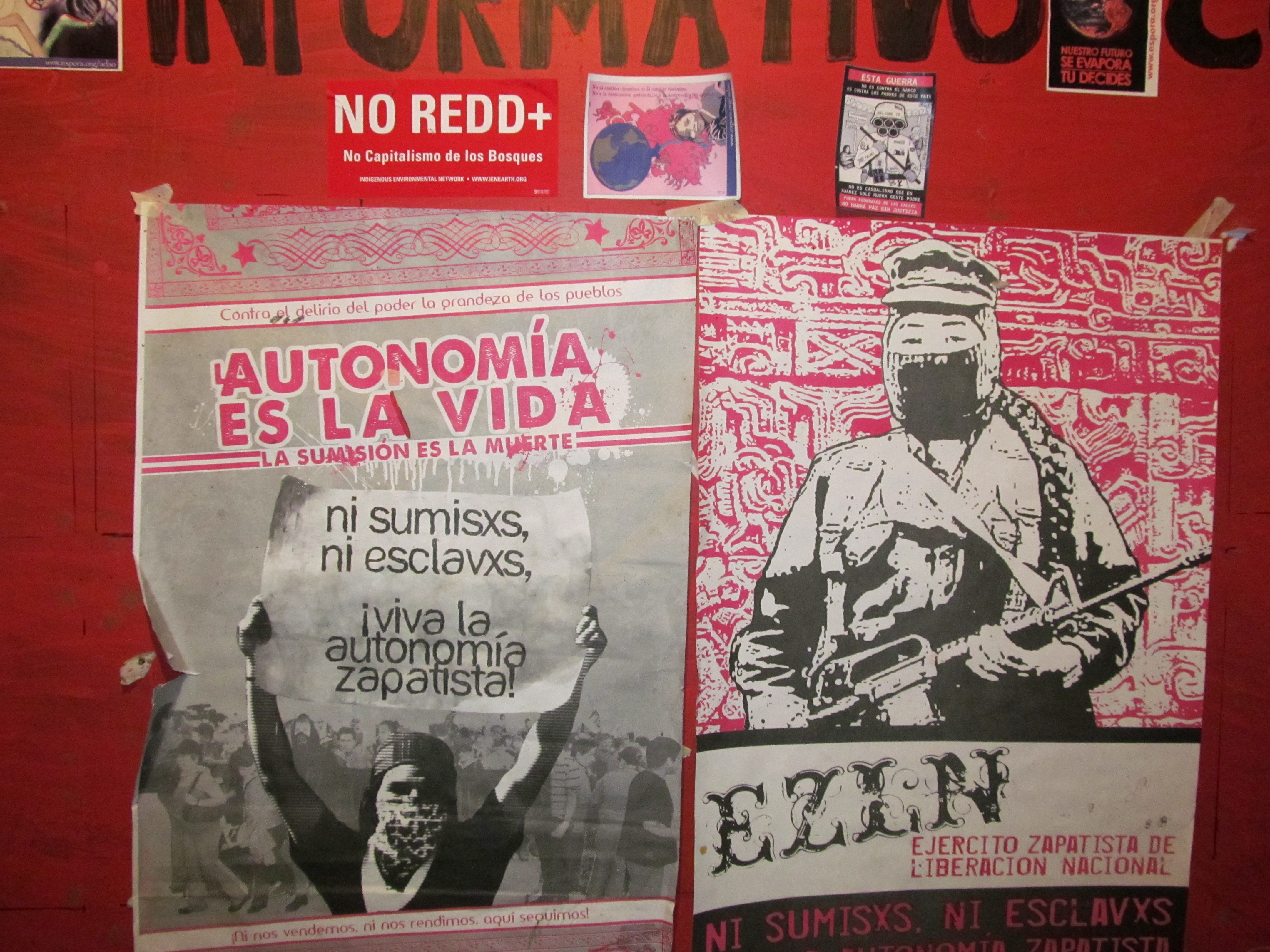 The indigenous movement in Honduras lacks the global attention and left glamour of similar movements elsewhere. Continual deaths and attacks by the military and company-paid goons go largely unpublicized and unnoticed. Yet COPINH feels deeply connected to indigenous autonomy movements around the world, especially the Zapatistas, as seen at the entrance to their national radio station. 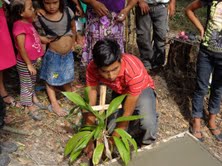 As is happening throughout the country, indigenous people in Rio Blanco are being attacked physically, politically, and legally. On July 15, a soldier shot community leader Tomás Garcia multiple times at close range. He died immediately. A member of the Indigenous Council and of COPINH, Tomás had been offered 20,000 Lempiras (US$980) to support the dam project. Despite being extremely poor and needing to provide for his large family, he refused to sell out. Tomás was laid to rest in the community cemetery, surrounded by the riches of Mother Earth he had fought to defend. Here, one of his six children places flowers on his grave. 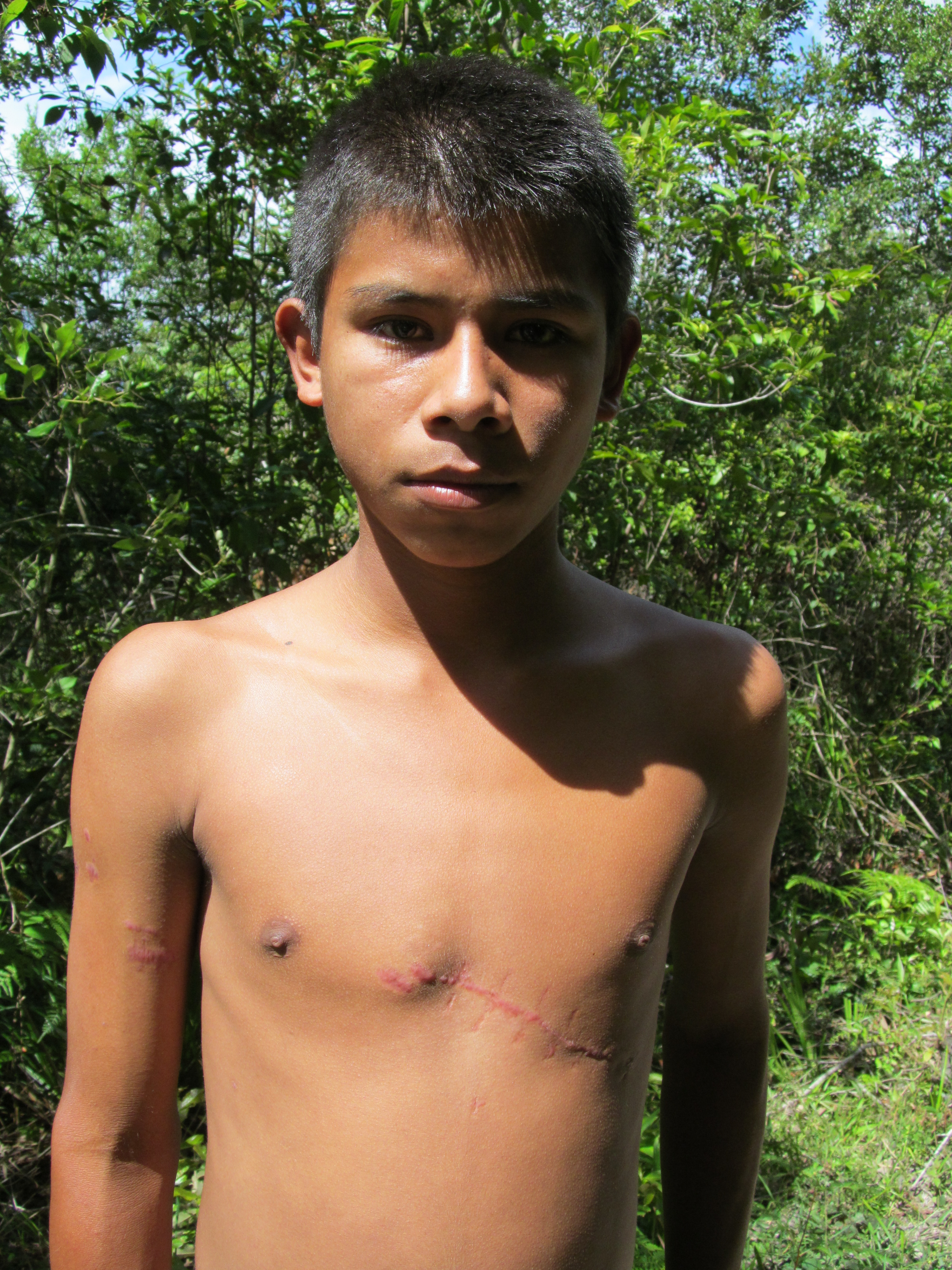 Alan García Domínguez, 17, was walking down a dirt path in Rio Blanco with his father, Tomás, when the latter was shot dead. Alan was shot twice, both bullets striking perilously close to his heart. Alan's mother has serious health problems and cannot work. The six children, as young as eight years old, are now solely responsible for planting and harvesting the cornfield that (barely) sustains their family. None is in school. The family cannot pay for the mother's monthly medical expenses. 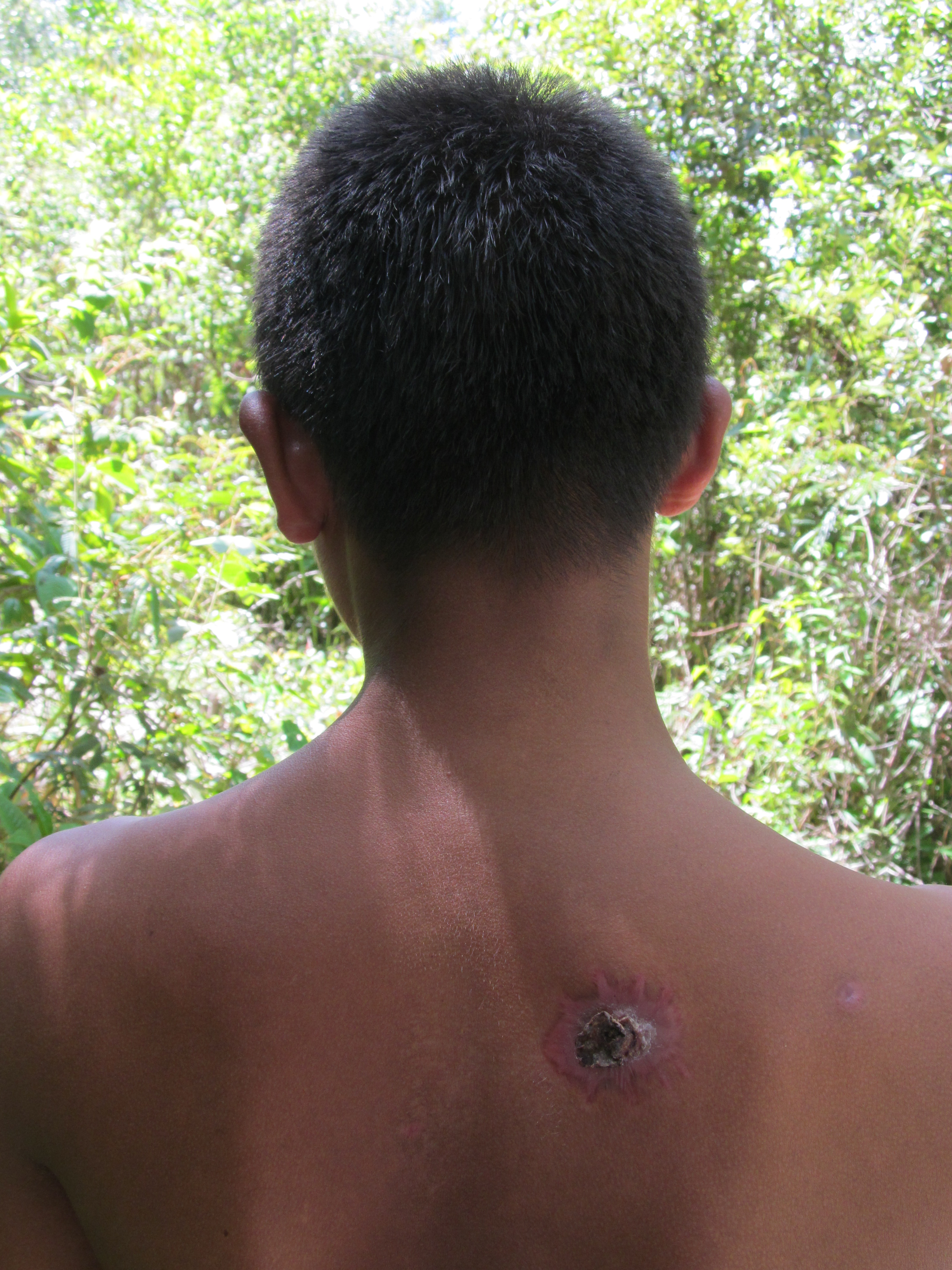 Alan continues attending COPINH events to defend the land. When asked if he wanted to be a community leader when he grew up, he emphatically nodded yes. 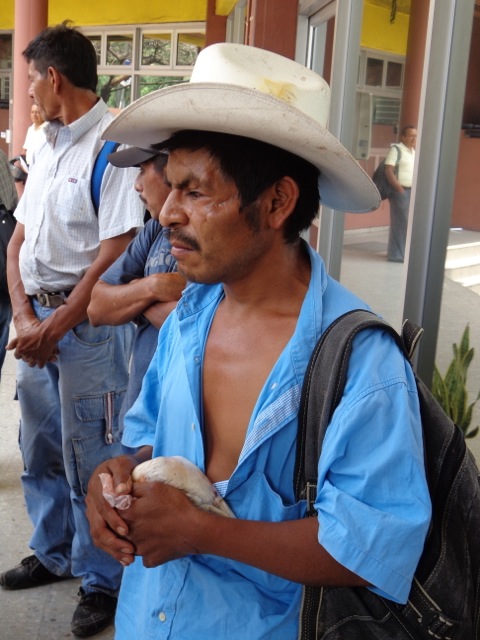 Five members of a large landowning family employees attacked Roque Domínguez with machetes on June 29, as he was walking home from the roadblock. They slashed his face, eye, arms, and hands. Roque remains actively engaged in the fight. He is shown here as part of a COPINH delegation that went to the Ministry of the Public last week to file a complaint for invasion of Lenca territory in Rio Blanco. 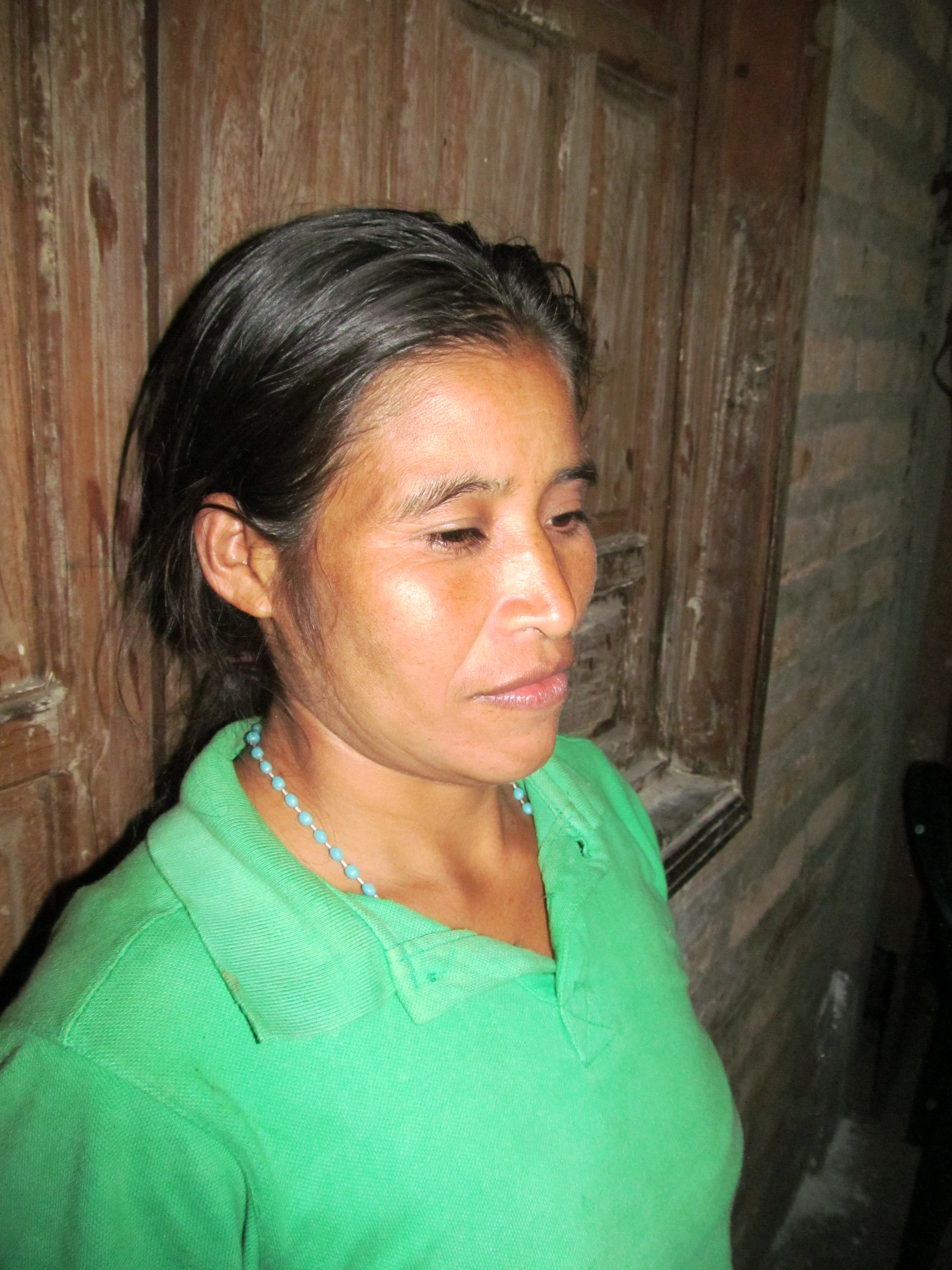 Maria Santos Domínguez is the sister of the slain Tomás Domínguez and the aunt of the young Alan, who nearly lost his life to two bullets. Maria is also wife of Roque, who was slashed by machetes. When we told Maria we lamented her family's suffering, she looked down and said, "We're going to take care it doesn't happen again." Then her expression sharpened and she said, "Screw the company trying to take our river, and the government. We're going to defend our community and our lands. If I die, I'm going to die defending life." 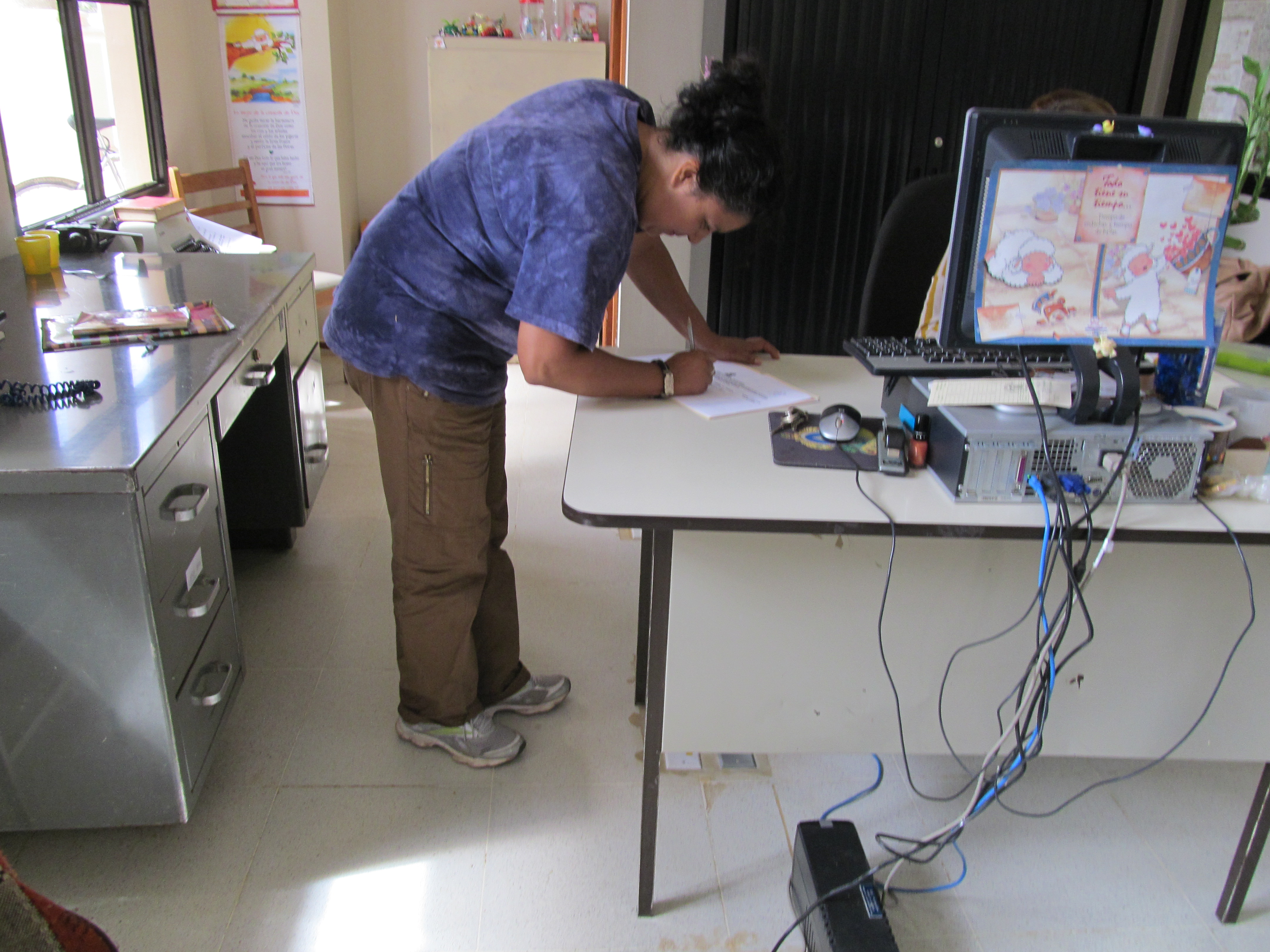 One of the charges brought against COPINH leader Berta Cáceres is illegal possession of a weapon "in contravention to the internal security of Honduras." She and two others, Aureliano Martínez and Tomás Gomez, have also been charged with "continual danger" to the security of the nation and "invasion of land" against the company... never mind that the company invaded Lenca land. The government's goal is to decapitate the movement, putting Lenca leaders in jail so that the corporations can continue their extractions unimpeded. The trial of the three is September 12. Here, Berta is shown on August 30 signing in at the local courthouse, as she has been ordered to do each Friday. She has also been prohibited from going to the "scene of the crime" - the river in Rio Blanco - and leaving the country. 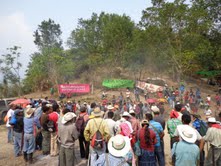 The Rio Blanco community at its blockade of the dam. COPINH member Aureliano Molina, one of the three who will go to trial on September 12 for being a danger to the nation, said, "We don't negotiate life." 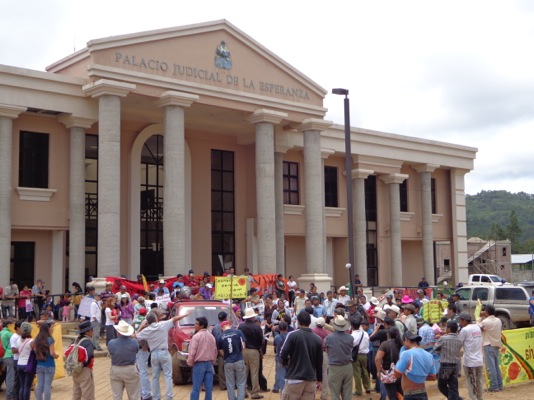 The community turned out to support Berta in front of the courthouse in La Esperanza in one of the numerous times she has been the victim of trumped-up charges. Berta said, "We always hold the spirit high, as Lempira did. And we remember the spirits who live in the Gualcarque River. Nature has living spirits, too, and they know that we are struggling to support them." 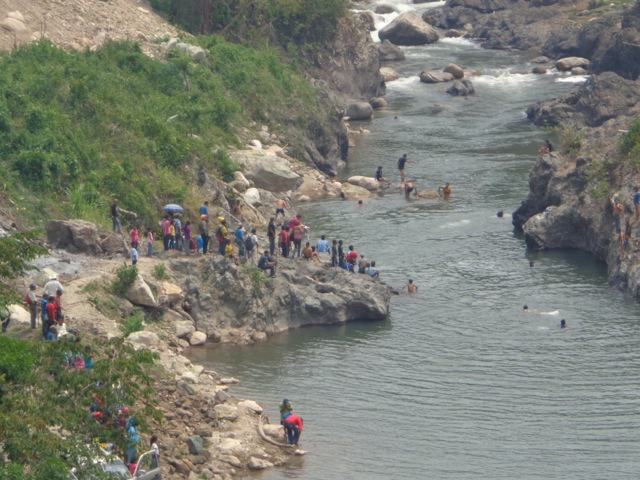 On August 30, DESA withdrew its damming equipment from the Rio Gualcarque. This is a victory for the resistance of the community, but it may be Pyrrhic. COPINH has learned of secret plans, if the right-wing party wins the November elections, for the government and company to move forward with the dam and to crack down even more viciously against indigenous peoples who refuse to submit. Meanwhile, residents of Rio Blanco swim in the river.

(COPINH photo of three heroes in hats): WE ARE ALL TOMAS, BERTA, AURELIANO. Please join us on September 10 for an international day of action to demand that charges be dropped against the three COPINH members; that the dam project in Rio Blanco be stopped; and that the government respect all ancestral territories and stop the violence against indigenous communities. See the Other Worlds website for actions.