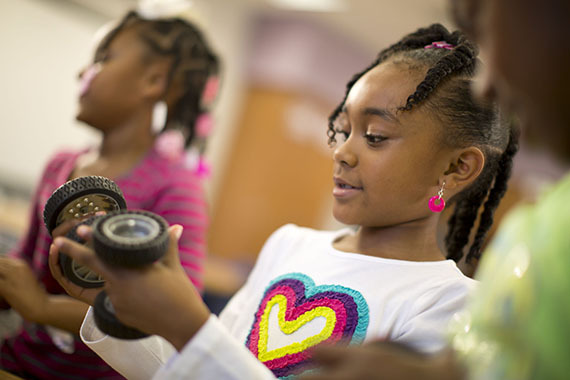 The United States can no longer excuse its poor academic performance by asserting that students in other nations excel in rote learning, while ours are better at problem solving. Recent test results clearly tell a different story.

Last month, the latest round of international standardized test results showed American students are lagging behind the rest of the developed world not just in math, science and reading, but in problem solving as well. The 2012 Program for International Student Assessment (PISA) test examined 44 countries' students' problem-solving abilities -- American students landed just above the average, but they still scored below many other developed countries, including Britain, Singapore, Korea, Japan, China and Canada.

Content knowledge and the ability to solve problems must both be priorities for our students. While some ability to solve problems comes from knowledge of facts and persistence, other problem solving requires curiosity and creativity. Without this broader skill set, our students will not be prepared for the jobs of the future and success in the global economy. Our education system, then, must focus not only on building students' content knowledge, but also inspiring creativity and an entrepreneurial mindset. The countries that do so will be the ones that prosper.

I recently visited South Korea as the U.S. Department of State's Speaker and Specialist on STEM (science, technology, engineering and math) education and engaged with diverse Korean audiences on the topics of STEM education and workforce development. South Korea's students excel in the fields of math and science, consistently ranking among the top 10 countries on international assessments. They also excel in an area that some might find surprising: problem solving.

How do they achieve these results? South Korea is one of the most competitive, high-stakes education cultures in the world. According to BBC News and other sources, students attend school from roughly eight in the morning until four o'clock in the afternoon, and then a large majority heads to a hagwon (an after-hours tutoring school) where they will spend several more hours before completing homework for the next day. In South Korea, students take an exam at age 18 that will determine their placement in university, and, to a great extent, their career path.

But despite this high-stakes culture, South Korea is not just focusing on rote learning. In the latest round of PISA exams, Korean students ranked number two in the world in problem solving. During my visit, Korean representatives noted that the education system is increasing emphasis on students' creativity.

In America, we must make core subjects like math and science relevant for students, and at the same time, foster creativity, curiosity and a passion for problem solving. That's what STEM education does. STEM is about using math and science to solve real-world challenges and problems. This applied, project-based way of teaching and learning allows students to understand and appreciate the relevancy of their work to their own lives and the world around them. Once they grasp core concepts, students are able to choose a problem and use their own creativity and curiosity to research, design, test and improve a viable solution.

Children are born with a natural curiosity. Give a child a toy and watch him or her play for hours. Listen to the questions a child asks. Children have a thirst to understand things. But then they go to school. They are taught how to take tests, how to respond to questions -- how to do school. At our own peril, we teach them compliance. We teach them that school isn't a place for creativity. That must change.

America is home to many of the world's greatest innovators and a place where entrepreneurs can bring innovations to life. Curiosity, creativity and persistence in solving problems have made these innovations and successes possible. We should be a world leader in problem solving and creative thinking instead of being satisfied with being in the middle of the pack -- and with the right focus on STEM education, we can. We must stop reducing and minimizing students' creativity and excitement and instead begin nurturing it in every classroom, in every city, in every state in America. We must invest all the resources and energy we can into creating an educational culture that values not only excellence in math and science, but excellence in creativity, innovation and entrepreneurship.