On March 9, 2010, Karl Rove, "Bush's Brain" released a self-aggrandizing contrivance of his political past, Courage and Consequence, in all of its hard-bound, chicken hawk glory. On March 3rd, 2010, a coalition of up-and-coming rock bands released an anticipatory sonic recollection of the gross misdeeds attributable to Rove over the past decade, "Karl Rove: Courage and Consequence -- The Unabridged Audio," in all of its aggressively righteous indignation.

A truly fair and balanced chronicle of the first decade of the New American Century, Karl Rove: Courage and Consequence is available for both free download in any format you want, as well for sale as a beautiful LP package with artwork by Danny Hellman and liner notes by the Rude Pundit and author Jason Myers. 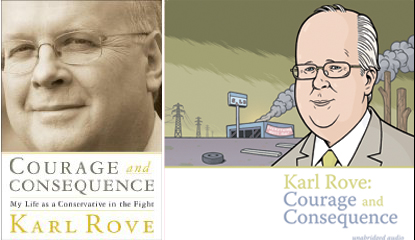 Here's the thing: we funded this thing entirely on pre-orders and donations almost universally at the $20 level or below. This wasn't funded by George Soros, ACORN or any other conservative bogeyman, it was paid for a bunch of broke rock and rollers, the entire thing costing 1/8th of the average speaking fee Karl Rove makes at every speaking appearance. Conceived along the lines of the Nation's Going Rouge vs. Sarah Palin's Going Rogue, it is a record with a very similar title as Karl's ridiculous book, with artwork and songs addressing and lampooning him and his misdeeds. I feel like we've won just by doing it, we've certainly met some notability requirements, but the compilation itself is actually quite good. This is worth noting.

You've already seen some of Karl's advance press, a fluff piece on the Today show and strategic releases about how his major regret is not answering his charges against liberals. This is like saying that your biggest flaw is that you a perfectionist in a job interview. You've seen the dark wizard of the Art of Distraction spinning his web, falling on the sword of ridicule, while whitewashing Bush's legacy, pushing the Overton Window and generally being a snide and deplorable waste of flesh. You are going to see more of it too, but here's a way you can directly fight back. You see, he has the Vast Right Wing Conspiracy (tm), his tv show and multimillions, we have a rag tag bunch of rockers, Mike Malloy and you.

You can also:
Lies, and the Lying Liars That Sell Them (
Lyrics
)
But most of all please help spread the word that the compilation
Karl Rove: Courage and Consequence
and NOT Karl Rove's
Courage and Consequence: My Life as a Conservative in the Fight
is worthwhile. It stands as an unconventional, but very real answer to Rove's distortions, and anybody can find out more at
http://www.karlrovebook.net