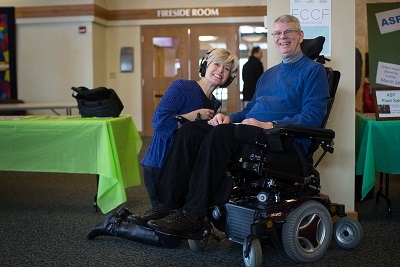 Her dad was dying. Her marriage was falling apart. So why would a journalist put aside the requisite detachment to get emotionally involved in a story about someone chronicling his own death from ALS? When Bruce Kramer asked Emmy-award winning Minnesota Public Radio host Cathy Wurzer whether she'd follow his journey toward the end of his life, she hesitated -- then said yes. It was a decision that was life changing for both.

We caught up with Cathy on Doing What Works late last year as she promoted the book she wrote with Bruce, We Know How This Ends: Living while Dying, which was recently nominated for a 2016 Minnesota Book Award.

What was it like to say goodbye to two people you were so close to, Cathy?

I think I'm suffering from post-traumatic stress because I was with both Dad and Bruce when they died and both died soon after one another. Bruce died in March of 2015, a couple of days before the book was released -- and about a year after my dad died from complications of cancer and dementia.

Bruce and I had been talking for a radio series since 2011 and I got to know him really well. He helped me brace myself for the loss of my dad, not that you can do that successfully. It's like trying to brace for the impact of a car crash. You can't.

When Bruce died I was so busy with the book I've only recently had time to process my feelings. 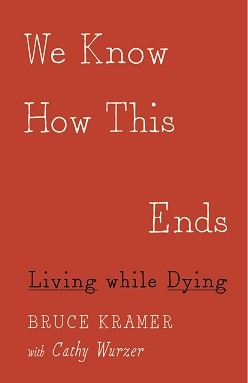 Bruce used to say he didn't want Death to arrive as a stranger, so he worked hard to accept his eventual passing and be ready for it and he tried to help his family and friends get ready, too.

We'd had long conversations about death, but we'd also been lulled into a kind of denial because he seemed, despite the ALS, to be doing well. It was a shock when he got the flu and began to quickly go downhill. I remember going to his home when his wife called to say that it looked as though the end was coming. I was so upset and started sobbing when I got in the door. Bruce looked at me, a little disgusted, and said, "Don't you know any jokes?" I said, "Bruce, are you kidding me? This is not a time to laugh." He looked at me and he said, "You knew this was going to happen." He seemed surprised that we were all falling apart. In hindsight, I feel bad that I saddled him with that kind of energy at the end.

Bruce was ready to go. He'd been in hospice for eight months, so he knew what he wanted out of the time he had left. He used to say, "I want to die fully alive." And he did! He lived an amazing, full life in spite of ALS.

What was it about Bruce, or how he grew up, that inspired him to make this transition so consciously?

Good question. He had a difficult childhood. His parents had some serious issues. And he, as the oldest of three children, had to take the reins and be there for his brothers. He grew up quickly. But he was also very interested in other cultures and other religions and he read widely. He traveled the world and learned how other people look at life and death and assimilated a broad perspective for his own life.

Wasn't it an honor to be invited to be with Bruce when he died?

Oh, yes. When we began our radio series, we decided we'd keep talking until the end. We just didn't know what that would look like. It is an honor to be with a person in their last moments.

Bruce wasn't afraid of dying but he was sad. If given the choice, of course he would've taken another twenty or thirty years of life. But he knew it wasn't to be. "In the great scheme of things," he said, "thirty years is an eye blink. It's nothing. But what is something is this millisecond together that we have. That's what means something." He was right.

Do you look at life for clues? Do you see sunlight streaming in through a window and wonder if he's saying hello?

Oh my gosh, Maureen. I think Bruce is around. I think all of our loved ones are around in some form. I did a commencement address at a local university and as I was going into the auditorium, wearing one of those academic cowls, the president of the university told me I had a beautiful butterfly nestled in it. How do you explain that? I'm sure it was Bruce. As it flew away I told him hello. Many of his friends have had delightful and unexpected butterfly visits since his death.

Bruce would often say, "The law of the universe is, energy cannot be destroyed -- it just takes a different form." We're all energy. So I wonder what form of energy Bruce is now.

How was it to watch Bruce die? What happened, exactly?

Well, that's a little private. Bruce was being kept alive by an external ventilator, a BiPAP machine that pushed air into his lungs through a tube in his nostrils. He knew if he were to quit using that machine, refuse treatment in other words, he'd likely die in a few days. With his body shutting down, due to the infection, he knew that it was his time to go. A small group of friends and family were with him at the end. It was very peaceful. It was so beautiful but so sad.

I'm much less afraid of death now that I've seen it. I'm less afraid to live, for that matter. I'm more willing to take risks. But I also weigh more carefully what I want to do. I'm more selective. I'm taking the time now to decide how I want to live until I die.

Cathy Wurzer is the host of Morning Edition for Minnesota Public Radio News. She is also the co-host of Almanac, a weekly public affairs program produced by Twin Cities Public Television -- which is one of the longest-running programs of its kind in the country. Cathy is the co-author, with the late Bruce Kramer, of We Know How This Ends: Living while Dying (University of Minnesota Press, 2015). She's also the author of Tales of the Road: Highway 61 (Minnesota Historical Society Press, 2007).