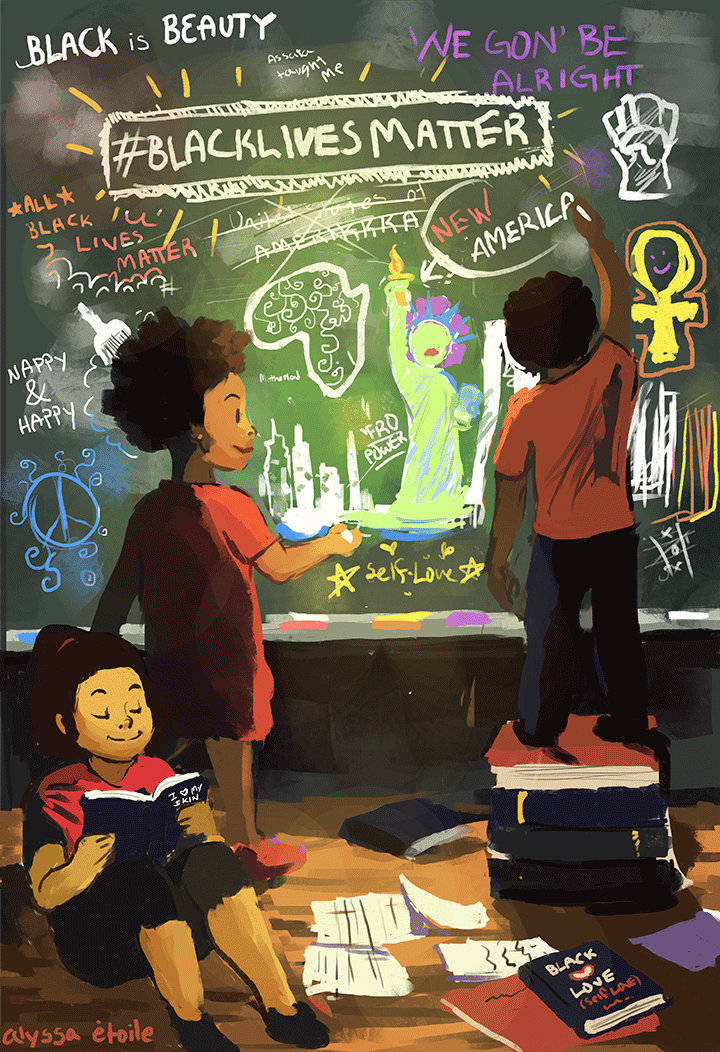 "You're gonna hear them before you see them." The security guard at the high school where I was going to be leading workshops with a group of sophomore girls left me with this statement as I moved from his desk and headed to the small room where the young women and I would meet twice a week over the next nine months. In his voice, I recognized a tone I had heard before when adults talk about teenage girls - especially girls who happen to be Black and attend public schools their cities define as failing. Even if most of us are not familiar with Signithia Fordham's foundational article on the relationship between Black girls and the institutional spaces like schools they inhabit and inevitably transform, we have all likely heard some exasperated and eye-rolling version of a warning against "those loud black girls." This is another way of saying that Black girls take up too much space, are disruptive, or as the previously mentioned security guard told me, "don't know how to act."

On that first day, I did hear the young Black women I would come to know as poets, dancers, actors, and social theorists, before I saw them. But, what was most striking to me about their sonic footprints was that they emerged not from their voices but from the metallic melody of keys clanking against one another. Almost every one of the ten young women in this group of 'after school political artists in training' carried bundles of keys in their hands or affixed to the straps of their backpacks and belt loops. These keys opened doors to homes and rooms that were their own, but mainly belonged to other people like their grandparents, aunts, uncles, cousins, and neighbors they were asked to care for because no one else in the family or community was able or willing to take on the responsibility. Jangling keys preceded these young women's entrances and announced their departures. But, they were also not the only aspects of how the girls moved through the world that made noise.

These young women were unapologetically vocal, loud in fact, about all of the ways that they experienced themselves being pushed to the margins and discounted across multiple contexts, from their high school to their homes, despite the fact that they were continually advocating for the well being of everyone else within those spaces. They challenged the male principal's over emphasis on mentoring and other support programs for boys to the exclusion of girls while also offering their own academic and emotional support for their male peers. It was not discrepant in their philosophy of community accountability to support others while still advocating for oneself. Balancing the responsibilities of schoolwork, extra-curricular activities, cooking and managing the home, looking after younger (and sometimes older) siblings often became overwhelming, they admitted, and they demanded that everyone in the home claim a share of the physical and emotional labor. But, even if no one else showed up, they always did.

These high school age young Black women were at the center of their communities because they intentionally centered themselves and understood their actions to be a refusal of an urban rhetoric that constructed them as complex outliers in the public narrative of Black life. Historically and in our contemporary moment, Black girls are contradictory figures. The intersection of race, gender, age, and the idea of their emergent sexuality make them ideal candidates for either thwarting or mobilizing the attainment of full social citizenship for Black people. Black girls can be hyper visible and hyper vulnerable when they are primarily seen as Black bodies, and yet remain hidden agents of potential danger when mainstream society attempts to engage them as human beings beyond the flesh. And yet, as the Black girls in this high school in Newark, NJ made clear to me, the anxieties around power, citizenship, and protection they arouse within and outside of an imagined monolithic Black community reveals more about our oppressively flawed and dehumanizing social order than it does about the category "black girl."

What compels someone, already overstressed by the untenable routine of her daily life, to call for equity even as she knows that if equity were to be realized, her status as Black, female, young, and low-income would mean she would be the last to receive the positive impact of this social shift? What is at stake when you speak and take up space even though you know what folk desire most from you is your silence and absence? I wonder what it would mean if we could all experience the specific type of courage it takes to confront these questions on a daily basis as part of the mundane way we would be continually asked to witness from the periphery and act from the center. I believe, if we understood the ethic of accountability and justice that undergirds the life worlds of a large majority of young Black women living in under resourced neighborhoods in our cities, we could continue to develop new models for activating democracy in this moment, and the courage to practice love as an act of collective centering.