Sometimes it's hard not to be absorbed -- and disturbed -- by the news of the day.

And that's not even talking about political strife here at home, which is increasingly strident, belligerent and ultimately dangerous.

Maybe that's why I find comfort in the words spoken almost 75 years ago, on the eve of U.S. involvement in WWII, by President Franklin Delano Roosevelt in his State of the Union address on January 6, 1941, which came to be known as the Four Freedoms Speech:

In the future days, which we seek to make secure, we look forward to a world founded upon four essential human freedoms.

The first is freedom of speech and expression -- everywhere in the world.

The second is freedom of every person to worship God in his own way -- everywhere in the world.

The third is freedom from want -- which, translated into world terms, means economic understandings which will secure to every nation a healthy peacetime life for its inhabitants -- everywhere in the world.

The fourth is freedom from fear -- which, translated into world terms, means a world-wide reduction of armaments to such a point and in such a thorough fashion that no nation will be in a position to commit an act of physical aggression against any neighbor -- anywhere in the world.

Norman Rockwell brought life to these ideals through his iconic Saturday Evening Post magazine covers in 1943, printed alongside essays by prominent thinkers of the day. 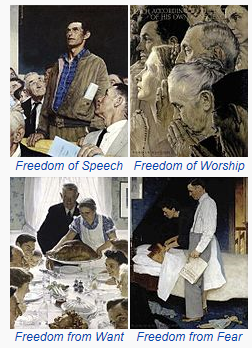 I find myself thinking about Roosevelt's words and Rockwell's paintings these days...in these intolerant, violent days.

Roosevelt characterized these as "essential human freedoms" and yet today it seems there is nothing "essential" about them. Even in America, they are being challenged everywhere we turn.

Freedom of worship? How is it that there are still swastikas painted on trees and homes of people of particular faiths burned repeatedly by an arsonist? How is it that people coming together for a prayer group can be shot and killed inside their own church? Or politicians blaming all of any faith for the actions of a few.

Freedom from fear? How can it be that going to a movie theater can be dangerous? Or enjoying a holiday party with work colleagues? Or simply going to school?

Freedom from want? How can we have a peaceful world with economic inequality growing rather than shrinking? Where education to improve one's position in life is denied? Where the education that is available is not necessarily of high quality, and where there is a disconnect between available jobs and the skills of those seeking work. Where there are food deserts and hunger in even the wealthiest nations?

And speaking as an American looking out at the wider world in which we live, FDR's Four Freedoms are even more challenged.

It is ironic that Norman Rockwell's name is often used today to refer to a simpler, idyllic time. His times, particularly the war years, were neither simple nor idyllic...they just seem so as we look back in time.

I think the humanness of scale and tone in those paintings communicates the right idea to all of us, across the decades -- that it is somehow up to us to help achieve these Four Freedoms.

And if FDR's "essential human freedoms" are not universal, and are not relevant in the world we live in, what has replaced them? What can replace them? Essential inhuman freedoms?

What would those essential inhuman freedoms be?

The freedom to ignore civil discourse?

The freedom to persecute those with different religious beliefs?

The freedom not to care about those who have less, as long as you have more?

The freedom to create fear and distrust anywhere and everywhere at any time?

So, as we head into 2016, perhaps we can each recommit to being part of a world that has, and honors, freedom of speech and worship and freedom from fear and want.

And maybe those of us in the nonprofit sector can lead the way.

We can start by encouraging open dialogue and idea sharing within our own organizations. At The Junior League we did that, most recently with a discussion about racially-motivated violence.

We can continue by building strong organizations that are, both in mission and in execution, helping to bring those Four Freedoms to life in our own society.

And we can, both individually and as organizations, speak out in our own communities as staunch advocates and defenders of these "essential human freedoms."

Please let me know your thoughts, either directly or in comments here. And, if you agree with what I have said, talk about it with your family, friends and colleagues.