This post was originally featured on Agriculture.com - Copyright Meredith Corporation

October is coming up and that means Halloween is right around the corner. Now I love Halloween. I love the pumpkins and the awesome decorations and the costumes. But you know what I don't like? Being scared. I hate the fear that surrounds Halloween. I know some of you may enjoy walking around in a corn maze and re-enacting a scene from the Texas Chainsaw Massacre. But that ain't for me. I like going into situations informed, knowing what could potentially happen. I don't enjoy purposefully subjecting myself to being scared. And I am sure many of you don't either.

So why on Earth is it any different when it comes to our food? Every single day in this country, we are bombarded with fear. It has become more and more apparent to me that sensationalism must sell. I mean how else are these people still making money hand over first? Celebrities across the board regularly use the most outlandish examples in order to feed this need for fear. And people eat it up. Hook, line, and sinker. Need some examples? 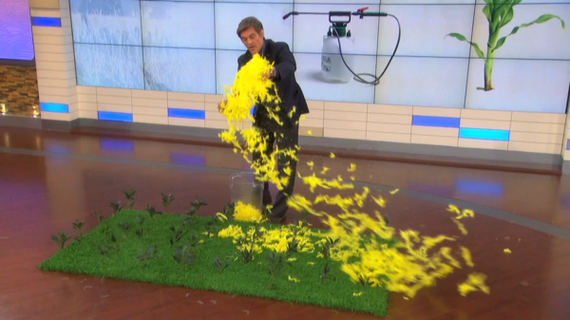 Dr. Oz recently has been all over the news, internet, and television talking about this "new" herbicide put out by Dow called Enlist Duo. His latest example involves an illustration of how spraying pesticides works. In the example, he uses feathers blown by a fan. This blog by Weed Control Freaks does a great job of addressing the fact that hey, when we spray pesticides, it is NOT AT ALL like spraying feathers. As I've discussed before here on the Huffington Post, it is calculated, it is precise, and when presented with the facts. It isn't something that needs to be scary at all. 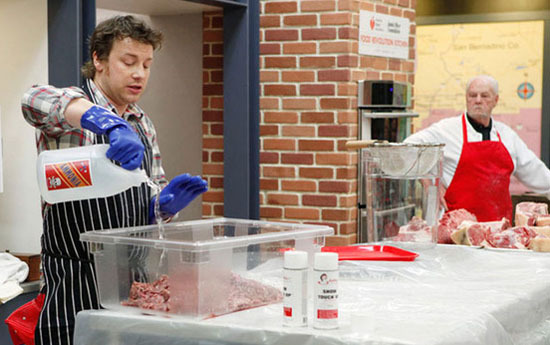 Jamie Oliver went on ABC two years ago and poured straight ammonia into ground beef and essentially told us "this is what your meat processor is doing". We all know the story. From one sensationalized headline, close to 1,000 peoples lives were changed in an instant. They were laid off from their jobs and whole businesses were forced to close. And people are still cheering this as a win? Meat processing plants use ammonia hydroxide. It is a gas, not a liquid that is sometimes used in our foods in order to elevate the pH present. Elevating the pH does not allow bacteria to live and thrive on the surfaces of our food. In the meat industry, this step is called pathogen intervention. It's one simple step our industry can take to DRAMATICALLY reduce harmful bacterias such as E. coli. 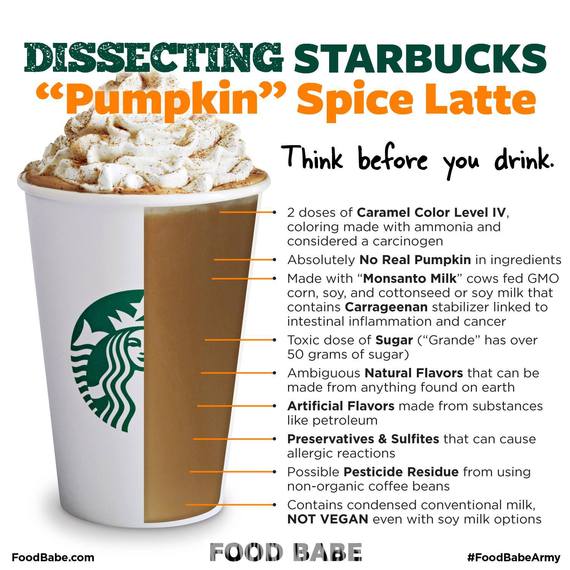 The Food Babe is another popular online sensation who regularly uses fear to bring her followers and readers closer. One week it is that Starbucks is giving us cancer through our pumpkin spiced lattes while another week it is that our microwave is slowly killing us. While places like Time magazine have come back at us about how our pumpkin spiced lattes are nothing to fear. Look up the "chemical makeup" of an egg or a banana and tell me if you can pronounce everything in there. Our whole foods themselves are made up all sorts of different compounds.

The worst part about this whole thing is that the people we apparently trust are KNOWINGLY feeding us this fear. Recently Dr. Oz sat in front of a congressional panel, Senator Claire McCaskill said "I don't get why you need to say this stuff because you know its not true." And Dr. Oz even ADMITS to lying. Even pop-culture outlets like Buzzfeed were reporting "Oz many times acknowledged products he told viewers to use are not scientifically supported and don't have the research to be presented as fact."

If you Google Food Babe scam, you will find DOZENS of articles calling out the Food Babe, who is a computer scientist by the way, about her regular fear-instilling tactics all to make a buck off of her "army." After the recent pumpkin spiced latte predicament, Kantha Shelke, a food scientist with a background in organic chemistry and spokesperson for the Institute of Food Technologists had this to say regarding the Food Babe: "This conversation about chemicals in food requires a certain amount of responsibility, which I think some of these elitist writers and bloggers and speakers have somehow forgotten. I think it's very irresponsible to be ignorant to such a level as to lead others astray and tell them to eat chemical-free food. After all, water and salt are chemicals."

I may not have a Dr. in front of my name, I don't regularly get to appear on ABC, and I may not have the hundreds of thousands of followers that the Food Babe does. But I can type into Google something that I hear on the television or the radio and I can find out that spraying chemicals is not anything like blowing feathers with a fan. I can find out what exactly is in my pumpkin spiced latte. How come I can do this stuff but we continually let these Dr. Oz and Food Babes of our society get away with such irresponsible behavior? 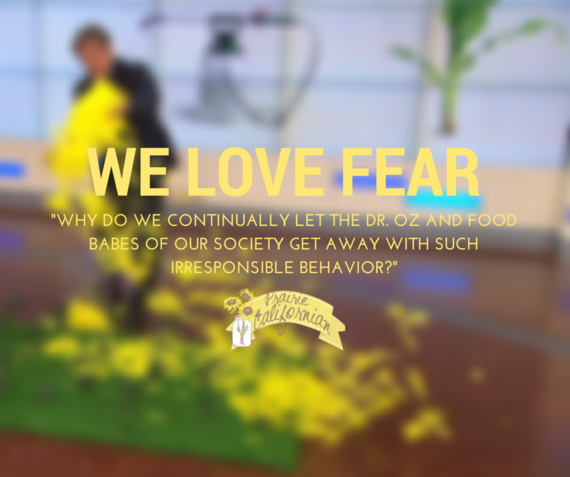 Now I know you may have be one to fall prey to these fears. I get it. I fully well know you are simply trying to do what is right and what is absolutely best for your family. But let me just put something out there. One statistic for you. 100 percent of people die. 100 percent. There will come a time and a day where we will all be gone. And let me tell you, it isn't going to be because of my pumpkin spiced latte or because I cooked my entire life with my nonstick cookware.

Life is busy, it is complicated. We are bombarded with all these mixed messages about our diet and what's healthy and what's not healthy. But just in case no one has ever told you before... it's okay to once in a while cook food that comes from a box. It's okay to enjoy your pumpkin spiced latte once in a while. It's totally okay to use your microwave to heat your kids a meal because you've been at work all day long. IT IS OKAY. Moderation is the key to life. Not fear.

Let's not make our already complicated lives even more complicated by buying into this fear. Let's not work ourselves to death by trying to avoid the next big scare. Let's give up this fear addiction. That may mean staying off the internet, not engaging on social media for one day a week, or shutting off the television once in a while. Set yourself free of this fear that seems to plague our society. Let's remind ourselves that moderation is okay. Setting ourselves free of this fear does one thing... It lets us enjoy the things in life that really matter.