When we think of carpets, images of bland loop pole rugs float to mind, tickling the toes but leaving the eyes and imagination rather unstimulated. We Make Carpets does not make those kinds of carpets. Instead of working in broadloom, wool or triexta, We Make Carpets works in more unorthodox materials, like crayons, or bricks, or straws, or even pasta. Yup, they may not feel so good under the feet -- in fact, don't touch them at all -- but, boy, are they easy on the eyes.

Amsterdam-based trio Bob, Marcia and Stijn made their first carpet in 2009, while collaborating on an "Instant Nature" exhibition for Dutch Design Week. They collected pine cones and needles, which resulted in what they dubbed "Forest Carpet." From there, We Make Carpets was born. "There never was a preconceived plan, like 'from now on the three of us will make carpets,'" the artists explain on their website. "It just happened. At the same time we had the feeling it might lead somewhere." 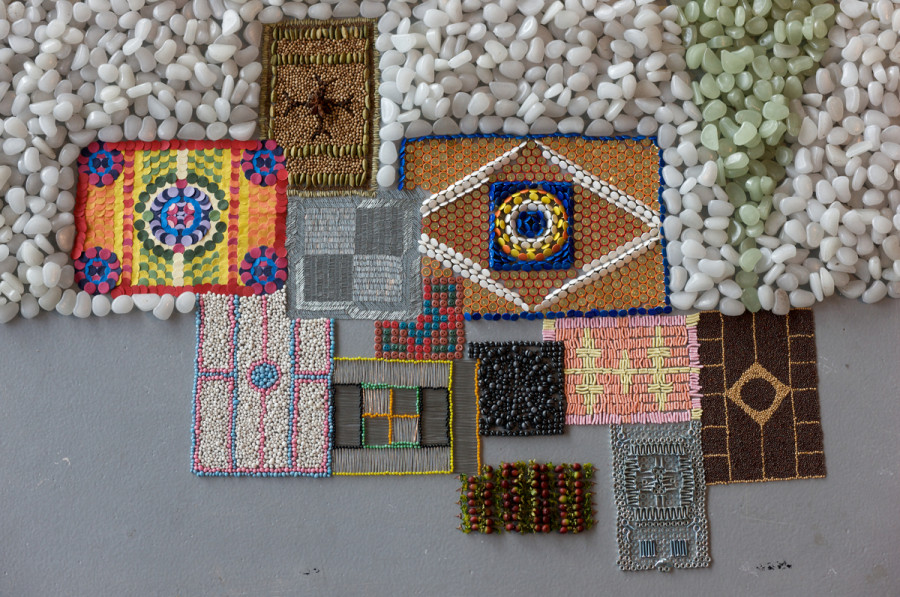 The craft-savvy trio has been in the business of unconventional floor coverings ever since. From far away, their dizzying tapestries resemble the geometric designs you'd encounter on a classic Turkish carpet. However, a closer look reveals the recycled and oft overlooked materials that make up the unlikely art objects. "The three of us always had an interest in the everyday things surrounding us," We Make Carpets told The Huffington Post. "They are produced in such huge quantities that nobody seems to notice them anymore. By making something new out of them, and using them in huge quantities, we try to renew their aesthetic value, and at the same time say something about the time it takes to build them and the fragility of the installations lying loose on the ground."

The artists have worked with media including skewers, confetti, party hats, sponges and umbrellas. "The materials have to be available in big quantities, so they have to be mass produced, that is one of the only criteria," the artists said. "Of course we also look at the shape and the color of the materials. In the end, everything has to come together: the material, the size of the work and the space we build it in."

Some carpets are as large as twenty by thirty meters, but the artists say the smaller carpets are the most physically taxing. "It puts your whole body under strain," Marcia explained.

The site-specific artworks are made on the spot, allowing the shapes and colors of the mundane materials to guide the symmetrical geometric patterns that soon emerge. Although the final products resemble rugs, the raw materials are often arranged on the ground, untethered, such that a single graze of the hand could disturb the entire fragile display.

"What will happen with the installations if it is touched? What will happen after the exhibition is over? It's nice that every everyday things can raise these kinds of questions."