Our march, the second ideation of the MLK Day of Action, Resistance, and Empowerment (MLK DARE) was 2,000 strong, beautiful individuals coming together to say, “we fight on.”

We fight on because this is not a new fight. As the inimitable Councilwoman Helen Gym said in her rousing remarks to the crowd, “The America we woke up to on November 9th was always there.”

For children in Philadelphia attending schools with lead in the water, the America of November 9th was always there.

For undocumented immigrants fearing for their safety in our city, the America of November 9th was always there.

For black and brown children wondering whether their lives would be upended should Donald Trump be elected, the America of November 9th was always there.

For the fast food worker trying to support her family on $7.25/hour, the America of November 9th was always there.

For the dedicated educator in Philadelphia’s schools who has gone without a raise for 5 years, gotten a second job, and wonders about leaving the profession, the America of November 9th was always there.

For the person of color who lives in fear that a broken tail light could result in death, the America of November 9th was always there.

For the mother of a child with disabilities, trying desperately to navigate a maze of advocacy to fight for her child’s right to a public education, the America of November 9th was always there.

Reverend Greg Holston, the executive director of POWER, said, “The reality is, people in our neighborhoods have been living in fear for years.”

So as we watch the inauguration of a President so far removed from the core values that so many of us hold dear, that fear is not new ― the only thing new is its face.

The process of the Trump transition has been horrifying to watch. But we must watch. Watch, act, engage, resist.

Consider, for example, the Betsy DeVos hearing. DeVos, Trump’s nominee for Secretary of Education, is a particularly egregious choice; she is completely unqualified, unprepared, and has spent her career in philanthropy working to circumvent the very system she is now nominated to lead.

But alas, perhaps that is the point. Joe Lieberman praised her for her lack of experience (citing her not being part of the ‘education establishment’- meaning, teachers? Schools? Public school parents?) as perhaps “one of the most important qualifications you could have for this job.”

The hearing went on to expose a number of other mind-boggling assertions. DeVos was unwilling to commit to enforcing the federal regulations under IDEA (Individual with Disabilities Education Act). IDEA is indeed a federal law that ensures children with disabilities are entitled to public education that meets their needs. Senator Maggie Hassan spoke about her disabled son, Ben, who attended the same public school as his sister, “because countless advocates and champions before the Hassan family worked so hard to make sure that he had the right to that education.”

The list of outrageous moments from DeVos’ hearing included a refusal to assert that guns have no place in schools, her refusal to commit to campus sexual assault guidelines, and her stunning belief that she is a voice for parents and children.

And Betsy DeVos is just one person in an administration turning out to be “very white, and very male.” A cabinet where leaders seem to oppose the very departments they are tasked to lead. It’s outrageous, it’s terrifying, but we must also remind ourselves that it’s not new.

Some may call this “new” approach to government just “shaking things up.” But I think it is important that we refuse to fall into that trap. We must recognize that what is unfolding before the world’s eyes is much more sinister.

But now, the America that has always been there has been exposed once more.

And so we march on.

Why We Must March On
Million Man March AP replacements 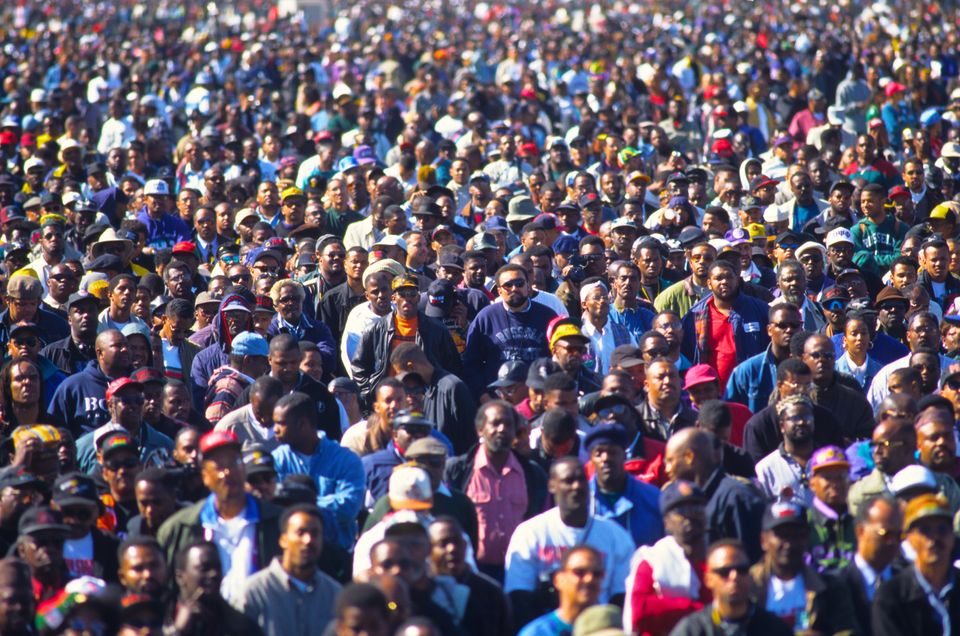 1 / 8
Washington DC. Oct 16th 1995. The Million Man March. Organized by the National African American Leadership Summit and the Nation of Islam's Louis Farrakhan which formed the Million Man March Organizing Committee. Finally estimated at about 837,000 people the march was made up mostly of grassroots groups of civil right groups and many social activists. Credit: Mark Reinstein (Photo by Mark Reinstein/Corbis via Getty Images)
Mark Reinstein via Getty Images