Wildlife web cams are a growing presence on the Internet, fueled by the public's often intense interest in following the daily activities of different species through their wired device. In Minnesota recently, that interest grew quickly to concern, and then to outrage, as an eaglet lay inactive on the periphery of a Bald Eagle nest. Outright hostility at the unwillingness of the state's wildlife agency to intervene on behalf of the eaglet led to intervention from the governor's office and eventual euthanasia of the fatally injured bird.

When we had a downtown Portland office and a phone number listed under our organization's name, I would get scores of calls - mostly in the spring - asking if we would help or intervene with baby ducks crossing the streets, young American Robins on the porch, or ridding raccoons in the attic, and the like. I never answered a call about our actual conservation activities regarding wildlife from strangers.

Most of us love nature, but how we view our relationships and any "role" in nature of course varies. We attempt to be a moral biped, and so we can be conflicted when we confront what we consider immoral behavior in nature. Yet, nature is amoral, not immoral.

Fratricide is the rule in nesting birds of prey, as most species rear only one young yet lay two or three eggs. Later-hatching young are more like an insurance policy than the desire for more offspring. In the case of eagles, older eaglets often kill younger ones and parents don't intervene. Change the channel if you want parents nurturing all young equally!

Concerned about being faithful? Stay with cranes or swans, as most other birds may be socially monogamous, but often stray outside the bond and so are not genetically monogamous. Beware pond ducks like Mallards, Cinnamon Teal, and others; they are "serially monogamous" - different partners every year.

Pond ducks, like this pair of Cinnamon Teal, most often have different partners each year. Thus, they are called "serial monogamists." Photo by Steve Zack/WCS.

Traditional gender roles your concern? Beware of Phalaropes, aquatic shorebirds in the far north and in the arid interior of western North America. Females are the more showy and aggressive sex. They hold territories and leave males to the incubating and rearing of the young. 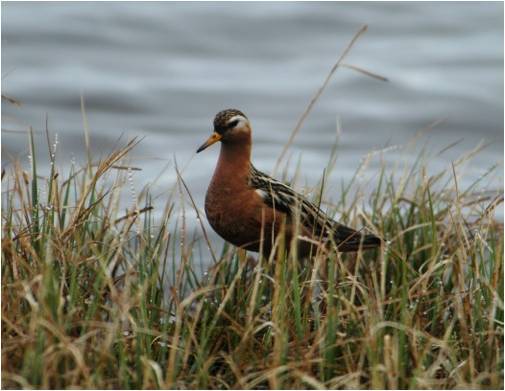 In phalaropes, like this Red Phalarope in Arctic Alaska, females are the showier (brighter plummaged) and more aggressive sex. They are polyandrous, as females lay clutches of eggs for 2-3 different males. It is the males that incubate and rear the young in these shorebirds. Photo by Steve Zack/ WCS.

Honesty and integrity important to you? Steer clear of the Drongos while on safari in Africa. These adroit vocal mimics often use alarm calls of different species to make small mammals like mongoose scatter away to cover, allowing the Drongos to eat their foods.

Homophobic? Keep your eyes averted from many seabirds, where same-sex pair bonds occur. I defer to my retired WCS colleague Dan Wharton in his pointed response to a Samantha Bee "interrogation" years ago on the "Daily Show" when pressed by her questions on penguin homosexuality "just because it happens in nature does not make it natural!" His response: "Um . . . I think by definition it actually does."

Yes nature is as nature does. The astonishing diversity of color and form is accompanied with an equally compelling diversity of behaviors and actions. What may appear to us as indifference, or duplicity, or belligerence is best understood in the context of its natural setting, not viewed through the lens of our morality play. 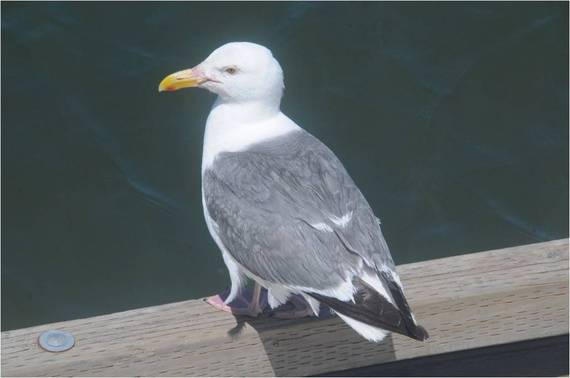 In many seabird species, like this Western Gull, female-female pair bonds occur. Such females may mate outside the pair-bond with another male, and the two females will rear the young from that mating. Photo by Steve Zack/WCS.

The moral of this story? My hope is that we can continue to express our love and concern for nature by conserving a place for it in our world. If we can change our focus from the apparent inequalities exhibited in nature when viewed up close and instead focus on the wider view where the real threats to nature are those that we place on it. What eagles do or don't do in their nests pales in consequence to what we have done and are doing to this and so many other species in nature.

We foisted pesticides on eagles and other birds, and almost lost our national symbol before we acted. A diversity of new poisons is driving vultures and eagles to risk of extinction worldwide. We are felling forests, shutting off estuaries, developing our prairies, and killing our remaining wildlife in great numbers with technology old and new. These are among the real world of threats and challenges we impose on wildlife in nature.

If we keep our lens and focus on the real threats to nature, then we will all be in agreement on where and when intervention is needed. It seems a moral imperative to me.