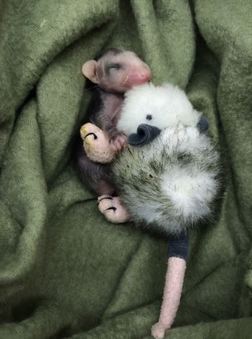 Does WildCare REALLY make a difference for orphaned wild babies?

This little orphan was a miracle baby last summer -- an opossum pup so tiny at 18 grams as to almost not be viable, and so late in the season we didn't have an opossum companion to keep her company (hence the stuffed animal she clutches in the photo).

As she was raised solo, and from such an underdeveloped age, Opossum Foster Care Team members were very gratified when this opossum grew into healthy adulthood. But would she be able to succeed in the wild?

Fast forward to last week. A young female opossum with a pouch full of healthy babies arrived at WildCare from West Marin, suffering head trauma, probably from being hit by a car.

A routine scan for a microchip elicited a beep... Wait, was it possible we'd seen this female opossum before?

When an orphaned baby animal has grown up at WildCare to be released back into the wild, the Foster Care staff and volunteers that raised her can only hope that she'll survive her first dangerous year in the outside world. We have very few tools that allow us any insight into how our orphaned patients do once they're released. 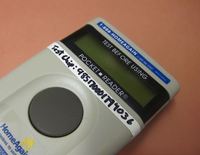 However, one tool that sometimes provides invaluable data is the microchip, the same injectable chip that our pets receive at the vet's. Although it is expensive for us to do so, WildCare microchips our mammal patients prior to release. It is very rare that the routine microchip scan (done during every mammal patient intake) indicates the presence of a chip, but when it does, the information gained is beyond price.

The microchip scanner gave us a number, which we were able to cross-reference in WildCare's extensive patient database. Reading this opossum's patient record, we discovered she was our "miracle baby" from the summer before! 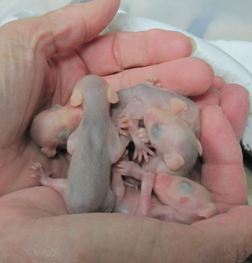 When we first met her, this opossum pup was so tiny, she was almost not viable, and she arrived so late in the season we didn't have an opossum companion to keep her company. Despite calls to all the other wildlife centers in Northern California, there simply was not another baby opossum to put her with.

This young female had several counts against her successful survival in the wild. Even more daunting, fewer than 50 percent of wild baby opossums survive their first year. Was this baby developmentally prepared? Would she be able to find a mate and have a family like other wild opossums? Medical Staff evaluated her over the course of the nearly two months that she was at WildCare, and noted that her instincts developed normally. She also showed no tameness, a risk with a single baby raised alone. WildCare always raises babies with members of their own species, except in extremely unusual circumstances like this one.

An opossum baby that arrives at WildCare weighing just 18 grams has a slim chance of surviving her first weeks in care, but this little one fought for every ounce she gained.

Opossums are marsupials, and are born smaller than the size of a raisin with no fur, tightly sealed eyes and ears and only vestigial limbs. Neonatal opossum pups use their forelimbs to climb from the birth canal into their mother's pouch, or marsupium, where they latch onto a nipple to continue their development. A baby that becomes dislodged from her mother's pouch while she still lacks fur has a very slim chance for survival indeed.

Staff and volunteers in the Wildlife Hospital all remembered this young female because she had arrived so tiny, was a solo baby despite our best efforts to find her a companion, and she had fought so valiantly to survive. All of these factors counted against her ultimate success in the wild, but of course we wanted to give her the chance. 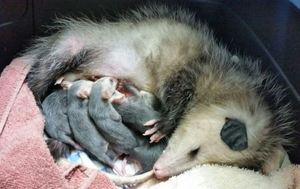 But this opossum not only survived her return to her natural habitat, she thrived! Obviously she found food and shelter, had successfully navigated her first winter storms, and she had even found a mate! Although it was very sad to see her back in the Wildlife Hospital, discovering that this opossum had succeeded in the wild to this point provides an excellent data point, and it shows that our Foster Care program for raising orphaned opossums is both effective and successful.

This young female had found great success after her release, but unfortunately, as happens to so many opossums in the wild, she had also found a road, and had probably suffered a glancing blow from a car. Her arrival at WildCare was precipitated by several calls from visitors to a campground in Olema about an opossum circling in the open, a clear indicator of head trauma.

In the Wildlife Hospital, we frequently see that a mother opossum can suffer a significant injury, or even be killed in an accident, but her body will protect her babies from harm. Our young mother has significant head trauma, and may have some vision problems, but her ability to care for her babies is unimpaired. The whole family will stay at WildCare while the mother heals and the babies grow up.

What will that be like? Watch the video below to see another mother opossum, a former patient, navigate her enclosure at WildCare with all her babies clinging to her back!