Alzheimer's Has Become the Scariest Disease of Later Life

It's true. In a new Age Wave/Merrill Lynch study titled Health and Retirement: Planning for the Great Unknown, we surveyed a representative sample of over 3,000 Americans to uncover both their hopes and their concerns about health and healthcare expenses.

Overwhelmingly, the study respondents said that the most important ingredient for a happy retirement is health. And while all diseases can disrupt both health and wealth in retirement, people of all ages now say the scariest disabling condition in later life is Alzheimer's disease. In fact, Alzheimer's was cited more often than cancer, heart disease, stroke and diabetes combined (see Figure 1). We may have reached a critical "tipping point" with regard to the public recognition of just how nasty, pervasive and threatening this disease is... and why we must stop it in its tracks. (If you like, you can download the entire study report here.)

Figure 1: Percent who say the scariest disabling condition of later life is... 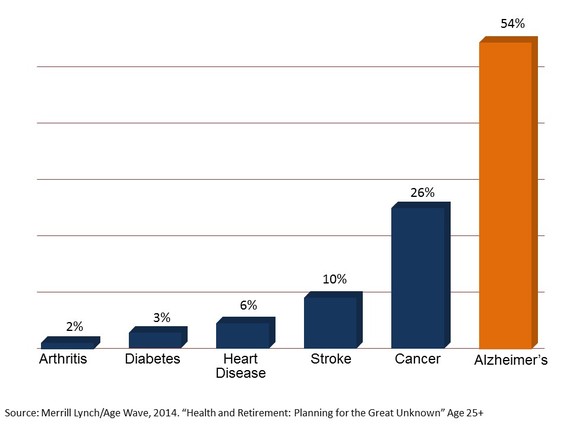 When asked why they are most worried about Alzheimer's, people say they are concerned about the loss of independence, dignity and the potential impact on their families. A diagnosis of Alzheimer's can mean years -- even decades -- of decline and the need for attentive care, often provided by family members that is almost always emotionally and financially draining. If you'd like to get a sense for how rough the ride can be and what we can do to stop this coming pandemic, read Meryl Comer's moving new book Slow Dancing With a Stranger: Lost and Found in the Age of Alzheimer's.

Although noninfectious, Alzheimer's is a degenerative disorder that steadily robs its victims of memory and judgment, leaves them unable to carry out the most basic functions on their own, and ultimately destroys their brains -- often in horrible and demeaning ways. Alzheimer's and related dementias seldom occur before middle age, but after age 65 the likelihood doubles about every five years -- and past the age of 85, the incidence is a terrifying 47 percent! With 5 million current sufferers and 15 million family caregivers today, the numbers are expected to triple in the coming decades -- unless a cure is found!

Currently, Alzheimer's is 100 percent incurable -- and strikes people down regardless of their gender, lifestyle or education level. Experience and emerging science has taught us that we cannot avoid Alzheimer's disease by having regular medical checkups, going to the gym or doing crossword puzzles. Both Ronald Reagan and Margaret Thatcher suffered the ravages of this disease for a decade despite their stimulating lives, support of their loving families and access to the best medical care. This disease will need to be beaten by science. What's needed are new breakthrough medicines or treatments that attack the causes of the disease directly. And they're needed NOW!

If we could simply postpone the onset of Alzheimer's disease by five years, one half of all the nursing home beds in America would empty. And if we could eliminate it, we would greatly expand the potential for all of us to live long, healthy and productive lives -- and save trillions of dollars at the same time. I have spent 40 years immersed in the study of the coming "age wave" and have seen evidence of wonderful ways in which the longevity revolution will have a positive impact on our lives. However, I also recognize that with our lengthening lives, Alzheimer's is like an evil black hole ready to devour tens of millions of us -- or our loved ones. I'm convinced that the very wisest -- and most cost effective -- thing we could possibly do to uplift every American's chance for a purposeful longevity and happy retirement is to wipe out Alzheimer's disease. But we're not taking the steps necessary to get that done.

The United States spends nearly $200 billion a year to care for people with Alzheimer's. By 2020 the cumulative price tag, in current dollars, will be $2 trillion, and unless there's a cure, an economy-destroying $20 trillion by 2050. Yet, as things stand today, for each dollar we spend on caring for people with this condition, the National Institutes of Health spends less than half of a penny on Alzheimer's research. This must change! 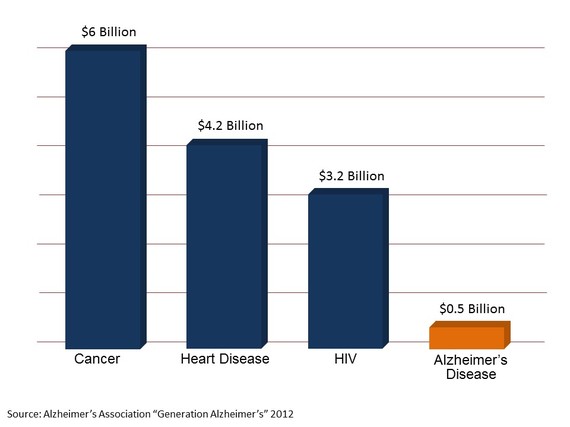 Do We Have the Vision, Guts and Smarts to End Alzheimer's?

In 1981, when I was around 30 years old, I collaborated on a book, Millennium, with Dr. Jonas Salk. One evening over dinner, he shared with me his recollection that during the 1940s America was terrorized by the spread of polio. Many well-intentioned people felt that the solution was to ramp up the iron-lung industry. Salk disagreed 100 percent. He felt that what was needed was to wipe the disease out! And, lucky for the world that he had his scientific breakthrough in 1953. We must do the same thing with Alzheimer's. We must beat this horrific disease before it beats us!

It's infuriating to me that our politicians from both parties have not displayed the leadership necessary to build a modern-day Manhattan Project (or Apollo Mission) to expeditiously stop this disease in its tracks. And so, it's up to us: Together we must set a goal of stopping Alzheimer's by 2025. We must stop it before it becomes a pandemic. We must deploy sufficient resources (experts believe that it could require $10 billion, similar to what was ultimately needed to combat HIV/AIDS), scientific talent and problem-solving technologies to save our collective future.

Seven Things We Can Do

This month is Alzheimer's Awareness Month. I propose that we raise awareness of just how horrible, destructive and expensive this disease is and that we deploy the attention and resources needed to beat Alzheimer's before it beats us.