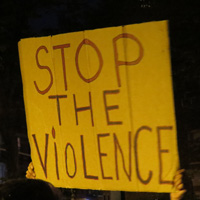 It is not sufficient to prosecute those individuals who commit anti-gay hate crimes. We must also address the societal conditions and contexts that create and fuel homophobia in society. Acts of abuse and violence against gay people are clearly symptoms of a broader societal problem, one that must be treated structurally if we are to ever succeed in reducing and eradicating violence against LGBT people.

A Societal Context That Is Hostile to Gay People

In the common, cultural meaning of the word, "homophobia" refers to the maintenance of negative and discriminatory views toward gay people. It is not a "phobia" in a psychiatric sense. Rather, the word serves as a concise way to refer to discrimination against those who are gay, in the same way that the words "racism" and "sexism" relate to discrimination based on race and gender, respectively. Homophobic beliefs drive homophobic conduct that occurs in all domains of societal life: at home, at school, in politics, on television, on the Internet, in churches, in organizations, at work and on the streets.

Earlier this month I wrote about two anti-gay hate crimes that had been committed in New York City, and I put out a call for LGBT people and our allies to rally against this violence. A rally was held on May 16, and two days later the city awoke to the gruesome death of Mark Carson, shot in the head in what police called a random act of homophobic violence. A second, much larger rally was held May 20, and within less than 24 hours, another two acts of anti-gay violence had been reported.

What has happened in New York City recently is not unique to this city. In cities and countries around the world, gay people are subjected to homophobic abuse and violence on a daily basis. Although the increasing visibility of LGBT people and gains in equality may be associated with short-term rises in homophobic violence, these changes are merely triggers and not causes of such violence. We must move beyond superficial and individualistic analyses of such heinous events and target their root causes: religion, patriarchy and heterosexism.

Religion and the Preaching of Hate

Any discussion about homophobia in society must absolutely reference religion. Clearly, not all religions or churches teach and promote homophobic messages. There are various LGBT-affirming streams of Christianity and Judaism. Religion as an institution, however, has, in general, played a key role in the fueling of homophobia throughout society. Conservative divisions of Christianity, Islam and Judaism continue to teach extremely negative views about homosexuality and gay people. In recent years in the U.S., the Catholic Church and its unofficial affiliate, the National Organization for Marriage (NOM), have taken on an almost national leadership role in the demonization of gay people under the veil of religion.

People who are born into certain religious environments and grow up hearing toxic anti-gay messages may, not surprisingly, develop negative views about us. Young and impressionable minds can internalize the notion that gay people are inferior and that homosexuality is an "abomination," something unnatural and deviant. This infecting of the mind with distorted and false information is an extremely powerful process and in many cases lays the foundation for future anti-gay abuse and violence. As more and more people "come out" of the gay closet, there are more opportunities for young people to question the toxic anti-gay religious messages they are taught. However, many are still raised in social and familial environments where warped and negative views about LGBT people are still passed on and maintained under the guise of religion.

Given the extent to which certain religious groups and organizations attempt to influence secular and public institutions, they should not be free from public scrutiny and criticism. Those churches and religious organizations that preach messages of hate and intolerance toward gay people should be rightly challenged and exposed for the role they play in causing homophobic violence. In the U.S. there is much talk about the importance of "freedom of religion." Well, that should also involve freedom from religion. The religious views of no particular group should be written into public, secular laws that affect all people in society. While those who practice particular religions are free to believe whatever they wish to believe, freedom of speech should also allow us to criticize those who speak and behave in ways that jeopardize the health and safety of LGBT people.

Patriarchy and the Demonization of Difference

Despite all the gains in gender equality that have been made in many countries around the world, patriarchy (the privileging of men in society) remains a powerful and defining force. Inequality between men and women continues to persist vocationally, financially and politically. The privileging of the masculine over the feminine and the continued social enforcement of rigid gender norms relating to masculinity and femininity play key roles in the development of homophobic views and conduct. Homosexuality is viewed as being in direct opposition to how men and women are expected to behave in a patriarchal societal system in which straight men dominate.

The pursuit of gender equality must be maintained, and sexism in all regards must continue to be challenged. There is no legitimate reason or basis for men, as a group, to be afforded more power in society than women. The neutralization of the power gap between men and women is crucial to all efforts to challenge the existing "gender order" and its emphasis on strict gender roles around masculinity and femininity. LGBT people have a unique opportunity to lead and educate on matters of sexual and gender diversity and to challenge the impossible demand that all men embrace "traditional" heterosexual masculinity and that all women embrace "traditional" heterosexual femininity. The fluidity and diversity of human sexuality and gender identity should be honored and embraced, not shamed and sanctioned.

Heterosexism and the Privileging of Heterosexuality

Intimately linked with patriarchy is the phenomenon of heterosexism, the positioning of heterosexuality as superior to homosexuality and bisexuality. The assumption that all people are heterosexual is a central feature of heterosexism. Biological diversity is ignored within a heterosexist context. The reality that a certain proportion of the population (from 5 to 10 percent) may identify as homosexual or bisexual is cast aside as irrelevant. Within a heterosexual societal context, homophobic views and attitudes flourish unchallenged. In countries across the globe, including the U.S., heterosexism is so ingrained culturally and institutionally that many people can't even see it or don't even know what it is.

Those who are not heterosexual, however, see heterosexism in action on a daily basis. The exclusion of same-sex couples from marriage laws dismisses the validity of same-sex relationships. The favoring of straight people in positions of political power ensures that those with the power are able to maintain it. Heterosexual cultural imagery on television, in movies, in newspapers and magazines and on the sporting field reinforces daily what society regards as the primary and most acceptable sexual orientation. Given our smaller numbers, it is very difficult for gay people, as a group, to counteract this heterosexual cultural dominance. The exclusion of gay people from a seat at the main table of society communicates the erroneous message that gay people are "less than," not worthy, not good enough. It lays the foundation for homophobia to flourish.

There must be ongoing and consistent efforts to challenge the heterosexism that pervades almost all societal institutions. While the majority of people may indeed be heterosexual, that is no justification for excluding the needs and views of non-heterosexual people. Societal laws in relation to marriage and adoption should be gender-neutral, allowing for equal access by both opposite-sex and same-sex couples. Workplace discrimination on the basis of sexual orientation and gender identity must be outlawed, in the same way that sexism and racism have been. The fostering of a cultural climate that is, in general, more reflective of the actual diversity that exists within society would chip away at the flawed assumption that all people are heterosexual. It would also make it easier for those who are LGBT to be more open and honest about their true identities.

A Future That Honors and Embraces Diversity 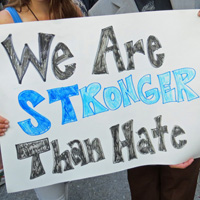 As an increasing number of LGBT people across the world start to lead more open lives, our visibility will continue to rise. As efforts to pursue equality under the law progress, opponents threatened by their loss of privilege may continue to lash out. Ultimately, however, visibility and progress are simply triggers for homophobic violence and not causes of it. Any effort to seriously reduce and/or eradicate homophobic abuse and violence in society must address the roles that religion, patriarchy and heterosexism play in the development and fueling of homophobic messages about gay people.

To that end, LGBT people and our straight allies must continue to speak up and challenge those forces and institutions that directly contribute to the occurrence of homophobic abuse and violence. Together we can defeat the forces of hate and in the process create a better society and world for everyone.