Thankfully, we're still a long way from the dystopian world depicted in the best-selling "The Hunger Games" trilogy, where food is used as a coercive political tool. Nevertheless, we have reason to be concerned about the geopolitical consequences of world food supplies running low, as analysts predict they will, following yet another summer of extreme weather, including record-breaking drought in the U.S.

As we've seen over the past several years, food shortages and rising food prices can cause destabilizing stress here and worldwide. America is the world's largest grain exporter, and, as the 2012 drought marches on, escalating damage to its corn and soybean harvest will be felt around the world in higher prices -- particularly for meat from corn-fed pigs and cattle. Food shortages are a strong possibility in the world's poorest nations, according to Oxfam and other NGOs, but working families here will also feel the pinch in their grocery budgets.

Simply put, those of us in the food industry are facing down a perfect storm of challenges that will require an earnest and thoughtful approach from all quarters: all hands on deck from farm to processing, packaging and market. How will we meet a rapidly growing demand for food -- especially since there's even more to the issue?

In the immediate future, a central issue in emerging economies is hunger and poverty. In 2011, world food prices went up by some 37 percent during the Russian wheat crisis, driving 44 million people into poverty, according to the World Bank. This year, the effects of drought may signal more of the same for food prices in coming months. 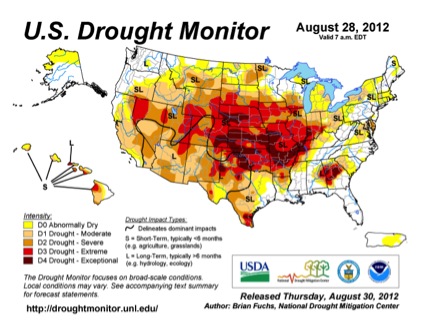 Changing demographics are also putting new strains on our food supply, as millions of "up and coming" consumers in places like India and China buy more milk and meat to reflect newly middle class tastes, as chronicled in the Journal of Nutrition. In just this decade, there will be a 30 percent increase in global demand for milk, Tetra Pak's own dairy index forecasts.

Furthermore, food crops and farmland are increasingly being diverted into biofuel production around the globe, making commodity crops scarcer and more expensive. In 2009, U.S. corn prices were more than 20 percent higher because of ethanol driven demand, according to a study by the International Center for Trade and Sustainable Development.

Meanwhile, as last month's World Population Day reminded us, we have over 7 billion mouths to feed. According to 2010 statistics (the last year available), about 14 percent, some 925 million, are already going hungry, including nearly 49 million in the U.S. at that time. And we have to make a place at the table for the 9 million-plus projected by 2050. To do so, we'll have to ramp up production by 70 percent, according to United Nations estimates.

The challenges are serious, and meeting them will require a multi-faceted approach. First, we need to take climate change and the potential effects of global warming seriously, and work on reducing carbon emissions still further.

Climate scientists predict extreme weather events with the potential to disrupt the food supply - including floods and droughts - will be far more common in the coming years. The International Governmental Panel on Climate Change recently released a clarion call to policymakers on this subject called Managing the Risks of Extreme Events and Disasters To Advance Climate Change Adaptation.

In its own business practices, Tetra Pak endeavors to operate as responsibly and sustainably as possible and has set clear and ambitious goals for reducing its own carbon emissions. Between 2005 and 2010, our company reduced its carbon footprint by nearly 13 percent while, at the same time, our production increased by more than 23 percent. Moving forward, our goal is to cap carbon emissions at 2010 levels by the end of 2020 while continuing to grow. With our forecasted annual growth rate achieving this goal would require a 40 per cent relative reduction in CO2 equivalent emissions.

In addition to mitigating climate change, we must also conserve and protect both water and farmland, which, as the Food and Agriculture Organization urges, should include a serious cost-benefit analysis of diverting crops into biofuels. As the FAO outlines in its report "How to Feed the World in 2050," we must also encourage investment in the agricultural infrastructure and research and development in the developing countries where most of the rising population will be born.

Price spikes hurt people in developing nations more, since they spend a much higher fraction of their incomes on food. As this graphic from the Gates Foundation shows, U.S. households spend about 6 percent of their total expenditures on food, as compared with 35 percent in India and 45 percent in Kenya.

As a result, a forty percent uptick in food prices in developing parts of the world is beyond devastating -- it's destabilizing.

With that in mind, ensuring food security in developing countries, where much of the population growth is forecast, becomes even more vital. This booming population will live almost exclusively in cities, which means they will rely on supermarkets and, therefore, packaged foods.

But delivering a safe food supply presents unique challenges in developing nations, including limited availability of refrigeration, which requires energy and special equipment in transit, at retail outlets and in homes. However, transporting and storing food safely in those countries is a challenge that can be overcome with innovative technologies like Tetra Pak's aseptic packaging.

Consumers of all income levels in Asia and Europe already buy milk and other food this way, in shelf-stable cartons, which can be stored for six months without refrigeration or preservatives. Increasingly, moms in the U.S. and Canada are turning to the convenience and portability of aseptic packaging, since it permits individual-serve milk boxes to be packed in moms' diaper bags and kids' backpacks without worries about spoilage, or stored in the refrigerator for the after-school set to grab for a snack. Happily, the benefits of this safe-food technology are also a boon to the developing world, where refrigeration is frequently not an option.

Everyone who engages in the business of growing, storing, packaging and selling food is being called on to creatively adapt to the tremendous food security challenges that are staring us in the face. That means we must all hunker down, collaborate and innovate to win the real world hunger games.

Image source: The U.S. Drought Monitor is a partnership between the National Drought Mitigation Center at the University of Nebraska-Lincoln, the United States Department of Agriculture, and the National Oceanic and Atmospheric Administration. Map courtesy of NDMC-UNL.