Senator Kelly Ayotte's recent email fundraising appeal taps into a fundamental and cross-partisan frustration with the overwhelming amount of money spent to influence elections by a minuscule segment of the population.

According to a recent PEW poll 84 percent of Democrats and 72 percent of Republicans "favor limiting the amount of money individuals and organizations can spend on campaigns and issues." Given the widespread support for reform, Senator Ayotte's appeal to fight special interest trying to buy a New Hampshire Senate seat is not surprising. But her appeal is disingenuous. 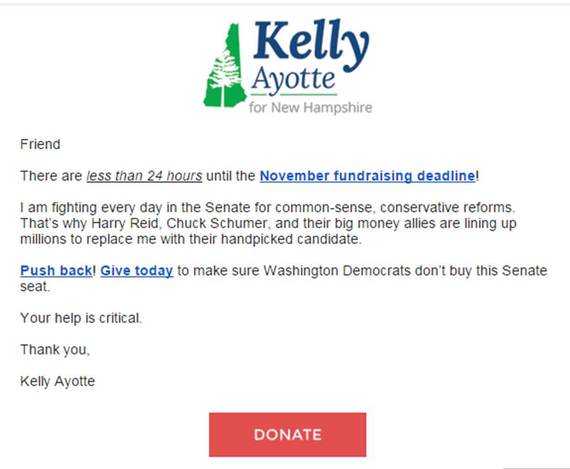 What has Senator Ayotte done in Congress to fight big money in politics? Nothing. She has yet to support the DISCLOSE Act which would increases disclosure requirements for organizations such as corporations and labor unions that spend money to influence elections; she has yet to support the Fair Election Now Act which would create a robust and viable small donor matching program; and she is vocally opposed to a Constitutional amendment to overturn Citizens United v F.E.C. and other Supreme Court rulings. A necessary action in order for Congress to set reasonable limits on campaign contributions and campaign spending.

Nor has Senator Ayotte taken a leadership position in the Republican party innovating new or different reforms that would help level the playing field and ensure all citizens have an equal voice in local, state and federal government. Such reforms could include a progressive tax on campaign contributions or a tax voucher to encourage more people to contribute to campaigns.

I agree with the Senator, we should not allow special interest - whether they lean Democrat or Republican - to effectively buy or attempt to buy representation in Congress. But we need elected representatives who are willing to take a leadership position in our government to restore our democracy. We don't need more empty rhetoric.