The heat burns hot between supporters of Bernie Sanders and Hillary Clinton this election. I'm a Sanders supporter and, like many of us "Bernie or bust" types, I lose sleep thinking about a possible Clinton presidency.

Part of the defeatism we see in Clinton supporters is the failure to view our political system for what it is  --  a human construct, entirely within the people's control to reform, tear down, and rebuild. Our system has been deemed an oligarchy. The way we finance elections is morally bankrupt. Conservative estimates say our American exceptionalist approach to "defense" (imperialism) is responsible for the killing of 20 million to 30 million people since the end of World War II.

Maybe you're comfortable waiting out the baby steps of establishment-led progress. Maybe you're fine with crumbs. But a recent study shows the working poor can no longer afford basic necessities. They're making Sophie's choice every day. Eat or buy gas to get to work. Pay the water bill or keep the lights on.

Public servants serve the public. That's not a mind-boggling concept. They don't serve business. They don't choose between people and business. They serve the people. They're supposed to protect the people from private interests that seek to profit from our exploitation and that of the commons we rely on -- the water supply (Flint), air quality, and workers' rights, for starters.

Hillary Clinton's record flip-flops in every area but her unwavering commitment to the Business Party. She gives exploitative corporations like Wal-Mart, financial institutions, insurers, the oil and gas industry, private healthcare companies, private prisons, and cornerstones of the military industrial complex a throne at the table where the rest of us have to crowd onto a single folding chair that's buckling under our weight. 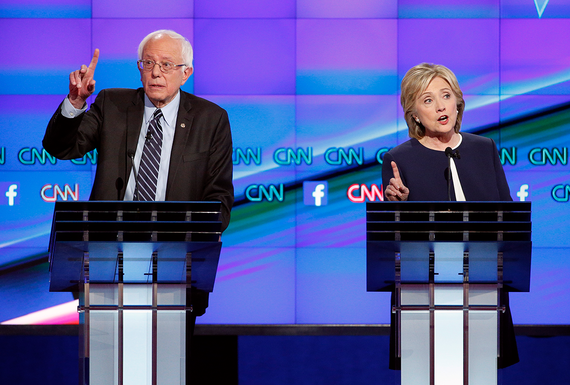 Hillary hasn't earned my vote. I refuse to vote for someone based on the notion that "the system just is corrupt, so we need a snake who can out-snake the other guy's snake." Our political and economic systems were built to serve the people. If they fail to serve the people, we have to demand more. We have to get educated, get involved, and be relentless about reform.

In his 2015 release, Because We Say So, American philosopher Noam Chomsky wrote:

Elections are run by the public relations industry. Its primary task is commercial advertising, which is designed to undermine markets by creating uninformed consumers who will make irrational choices -- the exact opposite of how markets are supposed to work, but certainly familiar to anyone who has watched television.

It's only natural that when enlisted to run elections, the industry would adopt the same procedures in the interests of the paymasters, who certainly don't want to see informed citizens making rational choices.

The victims, however, do not have to obey, in either case. Passivity may be the easy course, but it is hardly the honorable one.

As a marketing and public relations professional, I can say with certainty that most of the field's minions don't consider themselves deceptive, but "creative." Most of them are looking out for themselves, providing for their families, or growing their resumes. Similarly, most of the cogs in our corrupt political machine don't consider themselves modern oppressors. Our brains aren't really equipped to accept ourselves as "evil." It's self-protectionist to justify or insulate ourselves from the consequences of our worst decisions. We zoom into our set of particular circumstances and find excuses for ourselves. If you and I do this, what makes us think politicians are any different? Oh, the money. I almost forgot. They're pocketing serious change selling us down the river. That complicates things.

Accepting defeat by way of corruption in our political system is not noble, pragmatic, or even justifiable. To claim our system is corrupt and requires corrupt politicians to "man" it is to accept much too little of America. There are decisions being made every day that will make things a little worse down the road. We can demand more of our political system  --  and we must  --  if we want to consider ourselves "patriots" or even "citizens."

"What the people want is very simple  --  they want an America as good as its promise." --  Barbara Jordan

In the end, when we're comparing Bernie Sanders and Hillary Clinton, we're not talking about the differences in their policies. We're talking simply about whether or not they will enact them. Hillary promises to tell Wall Street to "cut it out," yet there's a trail of breadcrumbs between her campaign finances and the decisions she's made over the years where she compromised in favor of business over the rights and wants of the people.

What Bernie does best is unite people around a message of not accepting corruption as a "well enough" status quo. We understand in theory that when a live lobster is placed in a pot of lukewarm water and the heat is slowly turned up, it will start cooking alive. The meat will be tender. It won't fight because it acclimates to the new temperature as it's raised one degree at a time.

We're being cooked alive. We don't realize it when the little takes are small enough, but look at the consequences we face today as a result of a thousand cuts. Our meat is tender. The water is reaching a boiling point. When so many working people in the wealthiest country on Earth can't afford basic needs, we approach a dangerous precipice. One where pitchforks become a near-necessity when there are more people in need than there are to take from.

The consequences of not electing an honest, reforming politician like Bernie are great. We could be in a new war a year from now. The rights of workers along with many of our civil rights could be entirely undermined by the Trans-Pacific Partnership (TPP) by then. The poor will be poorer. The rich, richer.

Though things may feel comfortable for some, the water is getting warmer. Defeatism isn't pragmatic -- not when the temperature is rising. And, of course, it literally is.