There is an old saying for people who are stuck in an unhealthy situation: If you want to get out of a hole, stop digging. There is a corollary for a world addicted to fossil fuels: If you want to cure the addiction, stop subsidizing the drug.

It was President George W. Bush who used the analogy that America is addicted to oil. Bush, who had a problem with alcohol earlier in his life, put the analogy into his state of the union address in 2006. He could have gone further, pointing out that the addiction is virtually worldwide and the drugs in question are not only oil but also coal and natural gas.

Despite the painful downers these fuels have caused for generations of Americans, from economic recessions to wars, we not only continue to depend on them, we citizens actually pay an entire industry to make and sell them. The payments are made through a wide variety of government subsidies, most of them tax breaks. One result is that energy consumers, which is pretty much all of us, pay for fossil fuels three times: Once at the pump or meter, again with our federal and state taxes, and a third time for the impacts these fuels have on society, ranging from asthma to weather disasters and from oil spills to oil embargoes. 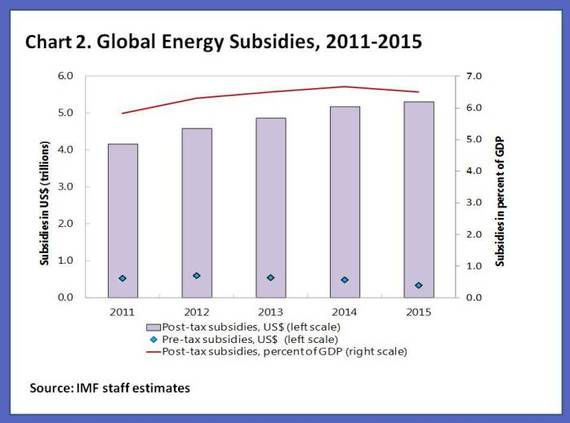 One of the shortcomings of the Paris climate agreement is that it does not directly address the global addiction to fossil fuels or the self-destructive practice of subsidizing them. In monetary terms alone, the addiction is incredibly costly. The International Monetary Fund (IMF) expects that fossil energy subsidies and their consequences will cost around $5.3 trillion this year, more than enough to circle the Earth twice with $100 bills.

The price tag is 50 times the $100 billion developing nations need to reduce their emissions and adapt to climate change. It is more than five times the $1 trillion analysts say the world must invest in clean energy each year to avoid more than 2 degrees of global warming. (Actually, the new consensus is that we'll need to keep warming to 1.5 degrees Celsius to avoid climate catastrophe, but nobody has done the math yet on how much investment that will take.)

An analysis issued last month by Oil Change International shows that the G20, which includes the world's 19 largest economies and the European Union, spent a combined average of $452 billion on fossil energy subsidies in 2013 and 2014, despite pledging in 2009 to phase them out. In fact, the same report says that some G20 nations have increased their subsidies for fossil fuels while cutting back their investments in clean energy.

In the United States, public subsidies for oil, gas and coal range from more than $20 billion to $50 billion annually depending on how "subsidies" are defined. Those estimates do not include the costs of "externalities" - for example, damages to health and environment and the military expenditures necessary to protect supplies of foreign oil. Only Russia spends more.

There is no defensible explanation for why taxpayers should subsidize our addiction to fossil fuels. If these subsidies were ended in all countries, neither the transition to clean energy nor adaptation to climate change would want for money.

A common argument is that the world's poor need subsidies to have access to energy, but multiple studies have found that the consumer subsidies in place today are largely ineffective for that purpose. Much of the money ends up in the pockets of middle- and upper-class consumers. There are more effective ways to help people escape energy poverty without contributing to climate change, and the alternatives are widely known. One of the more obvious is to help the poor acquire clean, renewable, distributed energy systems rather carbon fuels.

In light of the historic commitment by 195 nations to reduce their carbon emissions and to brace themselves for more climate disruptions, it is intellectually dishonest at best to continue subsidizing oil, gas and coal. But it is much worse than that. Knowing what we have known for years about climate change, but obligating taxpayers to finance it, is a moral crime -- the result of a corrupt collusion between the officials who control the public's purse strings and the companies that make and push carbon fuels. Now a formal investigation is underway to determine whether one or more oil companies violated the law by burying their own evidence of climate change so that carbon profiteering could continue.

It is not necessary for the United States or the rest of the world to abruptly go cold-turkey from fossil fuels A sudden withdrawal could put too much stress on the global economy. But desubsidization must occur now and continue steadily on a timetable and scale determined by what it will take to avoid irreversible climate catastrophe.

For all of these reasons, one of President Barack Obama's highest priorities during his final months in office should be a frontal attack on fossil energy subsidies. He should make sure the American people know how much of their wealth is being channeled into the fossil energy sector and how senseless and dangerous it is for the largesse to continue.

He already has tried to reduce these subsidies the traditional way. He has proposed a cut of $4 billion annually in every budget he has sent to Congress. But because Congress is firmly in the grip of the fossil industry, the President's modest proposals have been dead on arrival there.

President Obama does not have the power to reduce let alone halt fossil energy subsidies without Congress, but he does have his bully pulpit in a presidential election year. He can explain the indisputable logic of phasing out coal, oil and gas subsidies. He can rebut and discredit the phony arguments that switching to clean energy would be a job-killer and that without taxpayer support, oil and coal companies would have to raise the prices of their products. He can make clear that if voter apathy continues in 2016, America's addiction to carbon, like the physical addiction to alcohol or narcotics, will become increasingly damaging to our way of life, to the point that the damage cannot be reversed.

In short, we need the President to lead a public intervention. Perhaps voters, with their common sense and love of country, will decide next November that they will no longer elect leaders who obligate us to feed America's self-destructive carbon addiction.

Part 2 of this post will dive deeper into these issues.