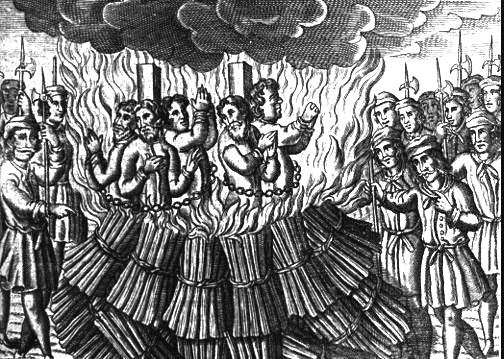 Ethics can evolve along with every area of human discovery, for instance, beyond ugly biblical myths born of justifying tribal hatred and ethnic -- God-made-us-do-it -- cleansing after the fact. Individual parishes, let alone individuals, may practice a compassionate and enlightened faith no matter how they differ with the "official moral doctrines" of their churches, mosques or temples left over from horrific times.

I've seen this ethical evolution in action. In fact my new book, And God Said, "Billy!," explores the roots of American religious delusion, and offers another way to approach true spirituality. My writing about ethical evolution is based on my own spiritual journey and what I've experienced in an enlightened local community.

There is only one defense against the rising worldwide fear-filled fundamentalist tide engulfing all religions: The embrace of paradox and uncertainty as the virtuoso expression of Christ-like humility. Our egos must be curtailed by what we do not know, which is far more than we do know. This humility is rooted in a fact: we are at the beginning of creation and don't have any clue as to how things will grow and change. To me this embrace is found in defending our wonderful liturgies and traditions which bind our communities together with blessedly familiar and comfort- able predictability -- so that a granddaughter may share her grandmother's faith and practice in unbroken glorious contiguity -- and yet simultaneously by using what is in those traditions at their heart to open rather than close doors.

For instance, in our local Greek Orthodox church community (I've been in for 23 years) we have active members in key leadership roles with less than so-called Orthodox living arrangements and/or sexual orientation. According to the "official" rules of the Greek Orthodox Church some of our leading parishioners are "living in sin" and the rest of us "sinless ones" should say that these people are "unfit" to help lead our parish.

In actuality the local community my wife Genie and I are part of assumes that we all must live and let live, and (most of the time) we take people as we find them and expect the same treatment. In other words the people in our local community are better than our official Orthodox "moral" doctrines, just as my missionary parents were kinder than their mean Reformed Calvinist "God."

As proof of my local parish's tolerance my church hasn't kicked me out! I'm welcomed even though I've written books in which I've admitted to fornicating, lying and stealing. My fellow parishioners elected a sinner like me to serve on our parish council for seven years. And compared to my temper and ignorance -- not to mention that I played a part in creating the Religious Right that produced hate mongers like Sarah Palin and dangerous fools like George Bush, Ted Cruz, and Glenn Beck, and then turned them into millionaires -- who cares about someone's loving relationship or who it's with?

Besides which, the only "problem" the official Church might have with our gay, divorced or cohabiting parishioners rests on ridiculous verses in the Bible and the insane traditions that sprang from them. The anti-gay biblical "teachings" are found right next to other verses that say that women who lose their virginity before marriage must be killed and that slave owning is just fine. And these "moral teachings" are in the context of stories where the "godly" the "chosen" are told by their awful God to kill all the women, children and animals of tribes who happen to own the land "God's People" covet!

What to "Do About" All This?

What today's fundamentalists share is a self-righteous, scripture-circumscribed approach to the world. No room for encounter, no place for paradox, between righteous self and surely- wrong Other. All the major (theistic) scriptures -- when taken rigidly -- sanction barbarity and are anti-democratic. They all demand an allegiance to a "jealous God" (in the Bible's words) to whom worshipers owe allegiance over and above their country's constitutions or the rule of law or even common human decency. And it is that sense of the special revelation of "truth" to a "chosen" few that threatens us all.

Theocracy verses democracy: Do you want to be a "good Jew" or a "good Christian" or a "good Muslim" first or to be a good human being first? Everything else is a footnote. Put fundamentalist religion in its place - in other words in the dustbin of history. Replace it with humanism, tolerant spirituality, ethnic, racial and sexual diversity and science rather than ideology.

In this quest no one fully arrives. This, too, fits an ancient thread found within Orthodoxy and many other religions: humility and a definition of theology that is never about something as silly as doctrine, but rather about the content of our characters. In other words, prayer (not ideas about theology) is the direct experience of the Divine Presence in our daily lives.

Frank Schaeffer is a writer. His latest book -- And God Said, "Billy!" exploring the roots of American religious delusion, and offering another way to approach true spirituality, is on Kindle, iBook and NOOK for $3.99, and in paperback.

Frank Schaeffer is a New York Times bestselling author of more than a dozen books. Frank is a survivor of both polio and an evangelical/fundamentalist childhood