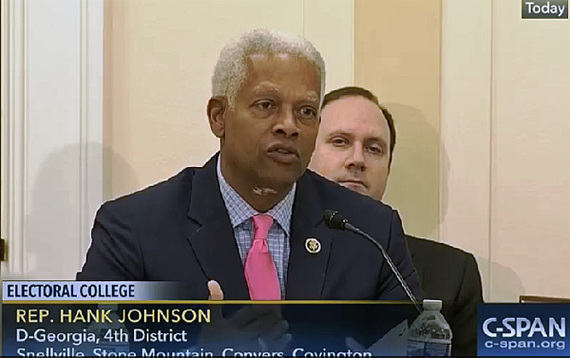 Yesterday, House Judiciary Democrats convened a forum on "The Electoral College and the Future of American Democracy." It has been nearly twenty years since the last hearing on this topic in 1997, and much has happened since then.

[Watch the forum on CSPAN]

But these aren't the only times in American history that this has happened: on five occasions since 1824, the winner of the popular vote has lost the election.

It is abundantly clear by now that the Electoral College is fundamentally antiquated, broken, and antidemocratic.

The Supreme Court has long held that the "conception of political equality from the Declaration of Independence, to Lincoln's Gettysburg Address, to the Fifteenth, Seventeenth, and Nineteenth Amendments can mean only one thing--one person, one vote."

The Equal Protection Clause of the Constitution likewise guarantees that all voters may equally participate in elections and that diluting votes based on a voter's residence "impairs basic constitutional rights under the Fourteenth Amendment just as much as invidious discriminations based upon factors such as race," as the Supreme Court held in 1964.

And during the Constitutional Convention of 1787, James Madison powerfully argued that if "power is not immediately derived from the people in proportion to their numbers, we may make a paper confederacy, but that will be all."

By removing the power of voters to directly elect the President, the Electoral College is an affront to this fundamental principle of direct representation.

In addition to undermining the will of the people, the Electoral College has also deviated from the Framers' intent in significant ways.

The Framers did not anticipate that candidates for President and Vice President would run on the same ticket, nor did they intend the electoral process to produce an electoral majority. Perhaps most importantly, the Framers intended that electors would be "free agents" to exercise independent and nonpartisan discretion in electing the president. Today, this independence would be widely decried as faithless and undemocratic.

The United States stands alone as the only presidential republic that does not directly elect its president. It's time to change that.

As the Ranking Member of the Judiciary Subcommittee with jurisdiction over interstate compacts, I strongly support the progress made by the states toward a direct popular election through the National Popular Vote Interstate Compact. Under this initiative, states that join the compact pledge their electoral votes to the winner of the national popular vote. While this compact will not take effect until enacted into law by states possessing 270 electoral votes and upon Congress's approval, it has already been signed into law in 11 states with 165 electoral college votes.

It is clear that change is long overdue and that this issue should not be partisan.

Americans did not directly elect U.S. Senators for the first 125 years of our democracy, and yet in 1913, the 17th Amendment was ratified to provide for the direct election of U.S. Senators.

There have also been over 700 proposed amendments to abolish or modify the Electoral College, and on several occasions, such measures have passed either the House or the Senate.

The President of the United States should be no different.