See "The Book of Broken Promises" for the history of the past telecom mergers in America and the harms to consumers, business customers and the economy.

AT&T's Mergers and the Trail of Broken Promises

Why would America ever want AT&T to get larger when it failed to properly upgrade and maintain critical telecommunications infrastructure of the utility networks in 21 states, which covers at least ½ of the US population?

And regardless of what you have heard, in every state there is still a telecommunications state-based utility, like Verizon New York or AT&T California. And these networks not only are for phone service, but include AT&T's U-verse, a copper-to-the-home broadband, internet and cable TV service based mostly on the existing copper-utility infrastructure.

And for those who say, 'Yeah, but it's all going wireless'... Even the wires to the cell sites and hot spots, (which can be copper or a fiber optic wire), that are used by AT&T or competitors, are part of the state utility. I will address the wireless substitution of the wireline copper and fiber optic networks in Part II.

And, I note, that even President-Elect Donald Trump has publicly stated he is against this merger. That's a start. Ars Technica's story ran the headline:

"Trump, our next president, promised to block AT&T/Time Warner merger."

Let's examine AT&T's current and future wireline broadband deployments and speeds, then review the history of the mergers that created the current AT&T and how they killed off the first generation of fiber optic services and competition in America.

Home Broadband and Internet Are in "Re-Verse".

NOTE: These prices are promotional and fictional as they do not include the large percentage of additional fees, taxes, surcharges, etc., and the promotional price is only temporary for one (or sometimes two) years.

In fact, according to various threads on multiple discussion forums, many customers claim that their price doubled after the promotion ends.

"Promotions End: My promotions have ended and my monthly fees have doubled. Called ATT this afternoon. The automated attendant informed me that the wait time was 1 minute. 25 minutes later I finally got to a representative. He was nice, but said that there was no promotions available."

With the purchase of DirecTV, AT&T now has no plans to upgrade most of its territories to high speed services.

The company supposedly offers higher speed 45 Mbps services on U-verse, but only in select markets to selected customers. And this is only fast in 1 direction, downloading. It's not even part of the current shopping page.

Fierce Telecom reports in April, 2015 that AT&T had 90 cities where 75 Mbps was available, but only 'parts' of the market.

We estimate that by the end of 2015, only 18% were able to order these faster speeds on U-verse. The advertised slow snail speeds are because AT&T's entire networks, save where they installed new fiber optic lines, are copper-to-the home - i.e., the original state utility networks are still being used and there is a fiber wire attached to a box somewhere within ½ mile of the location.

SBC (now-AT&T), in fact, directly misled the FCC to get the laws changed to block competitors in 2004. U-Verse was supposed to be fiber to the home. Then-FCC Chairman Michael Powell, now CEO of the cable association, NCTA, said so. Powell claimed his reason for closing the networks was due to the 'commitments' for 100 Mbps, fiber-optic based services by SBC, October 2004. (Powell states he is "removing unbundling obligations"; in FCC speak this is blocking competition from using the wires.)

"In my separate statement to the Triennial Review Order and in countless other statements during my seven years at the Commission, I have emphasized that 'broadband deployment is the most central communications policy objective of our day'. Today, we take another important step forward to realize this objective.... By removing unbundling obligations for fiber-based technologies, today's decision holds great promise for consumers, the telecommunications sector and the American economy. The networks we are considering in this item offer speeds of up to 100 Mbps and exist largely where no provider has undertaken the expense and risk of pulling fiber all the way to a home (FTTH).

"SBC (AT&T) has committed to serve 300,000 households with a FTTH network while BellSouth has deployed a deep fiber network to approximately 1 million homes. Other carriers are taking similar actions."

Based on AT&T's 2013 announcement of its "VIP plan", the company covered 76 million "locations", (a small business or residential dwelling), and AT&T is now focused on wireless and DirecTV, and both services do not offer seriously higher speed broadband.

To sum up some of the facts and commitments through 2019:

Based on AT&T's 2015 Annual Report, statements quoted in articles, and FCC filings, we find that at the end of 2015, AT&T offered about 18% of its customers speeds of 45 Mbps or more, and only in one direction, on U-verse. And at the end of 2019, including the fiber additions, it will only be able to offer this speed to 34% of the 76 million locations. AT&T claims it will have only 16% of the territory covered with fiber optics by 2019 (12.5 million total locations passed), and at the end of 2016 AT&T expects to have only 3% coverage, representing 2.6 million fiber optic lines.

This future-projection assumes that AT&T will actually stay on course and actually roll out the fiber optic wires it is required to do based on the AT&T-DirecTV merger commitments. These numbers were NOT audited by any state or the FCC, (as far as we know), so they are probably inflated, and there are questions about the accounting.

In short, by the end of 2019, AT&T may have only 34% of wireline broadband services with speeds of over 45 Mbps. And, we are not expecting this speed to show up as a wireless service in this timeframe.

AT&T keeps announcing new cities that it will be offering 1 Gbps speed services in parts of towns.

And the company has plans for 67 metros:

"AT&T offers our 100% fiber network to homes, apartments and small businesses across parts of 40 markets. We have plans to expand the availability of ultra-fast internet speeds up to 1 gigabit per second in parts of 27 more areas - at least 67 metros in total."

There are no maps provided by AT&T, (that we could find) and these are 'parts' of cities being served. And, these are 'cities' being served, not suburban or rural areas. Moreover, there is no plan to actually upgrade the state utility even though customers paid billions per state to have a fiber optic future

AT&T is the "King of Broken Promises" and while each state is different, almost every AT&T state was supposed to have had fiber to homes and businesses, including schools and institutions, starting in 1993-1996. AT&T was also supposed to compete for wireline-broadband outside of their own region. Instead we find that AT&T can essentially say anything.

And this was supposed to be at speeds of 45 Mbps in both directions, not snail speeds and apologies, starting in the 1990's.

AT&T Made Commitments for Fiber Optics in the 1990's, and Then Every Merger Killed Broadband and Competition in the AT&T States.

History tells us there has never been a merger where AT&T completed its merger commitments and, in fact, the combination of mergers helped to kill off the first generation of fiber optic broadband in America, not to mention direct competition for broadband and ISP services.

Starting in the 1990's, there was a telecom feeding frenzy called the "Information Superhighway". By 2010, virtually all of America should have had the aging copper wire infrastructure of the state utility replaced with a shiny fiber optic wire that would go to people's homes and offices at lightning speeds.

This is a partial list of AT&T (SBC) announced commitments to deploy fiber optics in multiple states--mostly to be completed by the year 2000. At least 12.5 million households were to be 'passed' and $35 billion in expenditures were announced.

Virtually nothing was ever built and anything that was being built was halted, sold off, or abandoned.

The current version of AT&T started as "Southwestern Bell", one of the seven Regional Bell companies which were created by the 1984 AT&T/Ma Bell Divestiture, each controlling multiple state utilities. And most of these companies were the progeny of the first AT&T, which was broken up because of its monopoly hold on America's communications infrastructure and technology.

SBC's first merger was with Pacific Telesis, which controlled California and Nevada.

Here's the actual region and city deployment by year, as told by the Pacific Telesis Fact Book, 1994. 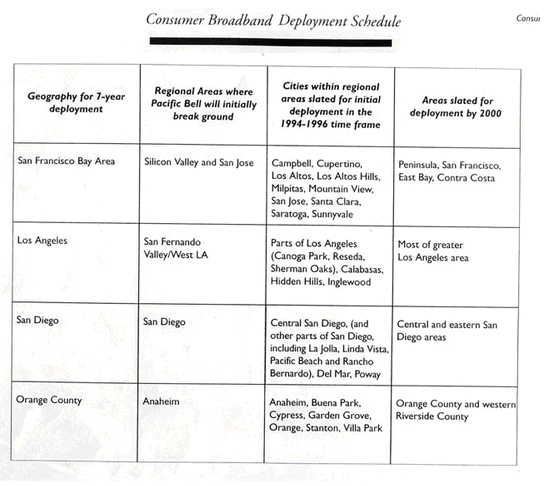 Unfortunately, customers paid billions as the state laws were changed to help fund these build outs and the company took billions in tax deductions and other perks.

After the PacTel merger, SBC then set its sights on other mergers.

And each state had its own specific commitments laid out. Ameritech Ohio was supposed to have all schools, libraries and institutions upgraded to fiber optics by 2000. The Ameritech Ohio alternative regulation plan, September, 1994:

"21. INFRASTRUCTURE COMMITMENTS The Company's infrastructure commitment in this Plan shall consist of the commitment to deploy, within five years of the effective date of the Plan and within the Company's existing service territory, broadband two-way fully interactive high quality distance learning capabilities to all state chartered high schools including vocational, technical schools, colleges and universities; deploy broadband facilities to all hospitals, libraries, county jails and state, county and federal court buildings...."

Also, SBC was supposed to compete head-to-head with the other companies in the other states - 30 cities would have direct competition. None of these ever materialized. One reason is that the FCC's merger conditions were garbage. The fine print only required 3, I repeat, 3 customers in a market to be considered 'completed'.

On top of this, Ameritech-SBC claimed it was going to spend $6 billion on something called Project Pronto. This was simply a made up ruse as, at the same time of announcing this project, the company was closing down and selling off the fiber that Ameritech had started to deploy as part of a cable network.

Then, in 2005, through a number of questionable actions by the FCC and the telcos, SBC was able to buy AT&T, and took the name.

To complete this picture, AT&T merged with BellSouth, which controlled most of the southern states, from Florida through North Carolina. AT&T-BellSouth claimed it would have broadband (albeit slow) to 100% of their then-22 state territory by the end of 2007. This, of course, did not happen, as told by AT&T's own statements. In the filing for the 'IP Transition trial', AT&T claimed that the company could not bring advanced services (broadband) to at least 4% of rural test area in Carbon Hill, Alabama, as of 2015. And, as we documented, the company hadn't finished 100%, either with wireline or wireless to potentially 25% of their territory.

We summarized the contradictory statements made by AT&T about this commitment. We even filed a call for an investigation, which this FCC should have undertaken years ago. The FCC denied our requests to investigate.

Conclusion: There Are Many Reasons We Need to Break Up AT&T. We Don't Need More Mergers; We Need Investigations--Now.