This post is by Myya Donnella Jones and originally appeared on The Well, Jopwell's editorial hub.

People are often surprised when they find out I'm from Detroit. "The hood," they call it. Or, my personal favorite, "the ghetto."

I am the product of a two-time teen mother who never graduated high school. You see, I can't tell my story if I don't tell my mother's first: My mom grew up in foster care. Her mother suffered from mental illness and her father was in and out of jail. My mom suffered from the same mental illnesses as my grandmother, and things only grew worse after my stepfather passed away when I was 10. My mom fell into a deep depression, and it was up to me to take care of her and my five siblings.

Some cycles continued, and some stopped. 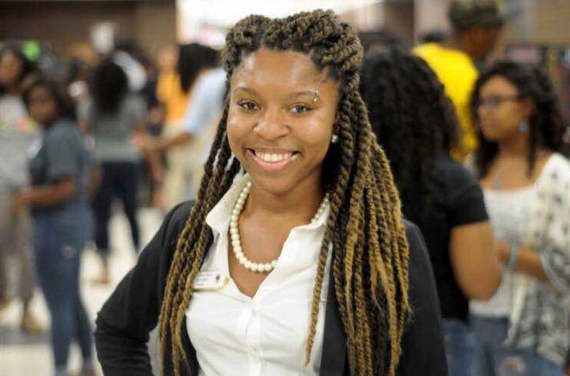 In ninth grade, a DNA test determined my dad was not my biological father. I had an identity crisis because technically I wasn't a Jones as I had grown up thinking -- I was apparently an Anderson.

I was angry, lost, and confused. And I too had developed bipolar disorder. I hated my mother, and I spent all four years of high school in therapy learning how to cope with this confusing condition. Academics, extracurriculars, and dance were among the outlets I used to improve my state of mind.

I have come to realize that conversations surrounding mental health and sexual assault are too often overlooked. These issues plague our community but are seldom acknowledged and thought of as taboo. Since these topics are commonly stigmatized, many people are unaware of free resources and counseling that can help people manage their conditions and achieve a healthy lifestyle. Most importantly, by not getting the support they need, too many people are unable to stop the intergenerational cycles of mental illness and sexual abuse.

My story is just one example of a three-generation cycle of bipolar disorder and sexual assault. I myself generally avoid these conversations, and it hurts to imagine the millions of other untold stories out there.

"Success" to me is continuing to live a healthy lifestyle and not allowing my relapses to overshadow my progress. I have taken advantage of free resources offered by my university and have even joined a sexual-assault support group. I sit on my school's Sexual Violence Advisory Committee, which was developed to improve the manner in which these cases are handled. My school hosted its first mental health awareness week last year, and this year I invited mental health awareness leader Hakeem Rahim to join us in helping to break the silence that exists on our campus. I want to get comfortable sharing my story with individuals in the Black community who struggle with similar obstacles. Nobody should feel alone or defeated by the system in the way that I once did.

I look back and realize how far I have come. The naysayers I encountered along the way put up a lot of barriers and made their doubts known: They didn't want Myya to complete two internships, serve as a resident assistant, or be invited to spent the summer as a guest at the University of Texas at Austin. They didn't want her to hold two executive board positions with the National Association of Black Accountants, become a Google Student Ambassador, study abroad in six different countries, or receive 18 scholarships. They especially didn't want Myya Jones to become the president of her university's Black Student Alliance, be selected onto Homecoming Court, or to become a sister of Delta Sigma Theta. Even now, I know there are people who don't believe I will soon graduate from Michigan State University with a Bachelor's of Arts in Finance and minors in Arabic and African American & African Studies.

I look forward to proving them wrong.

Myya Donnella Jones is a senior at Michigan State University studying finance, Arabic, and African studies. She is one of five first-place winners of Jopwell's 2016 Black Student Experience Essay Grant.

Stories & advice to help you navigate your career