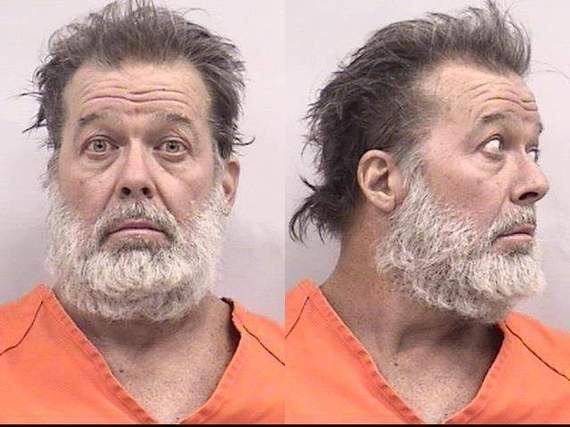 When I heard the news, I was getting ready for a date and couldn't believe my ears. A Planned Parenthood in Colorado had been attacked and police were trying to verify reports of what was happening. "Again?" I asked myself. "We're doing this again? The day after a national holiday?"

I'm ashamed to be an American right now, to know that friends in need of reproductive health will shy away from Planned Parenthood after events like these. If one person is too afraid to seek medical help or consultation regarding their pregnancy, our "city on a hill" has already begun to break down. If we allow this to happen again, we have failed as a society of responsible individuals. This is not our future. As cliche as these phrase are by now - indeed I sigh just typing them - we cannot overlook the familiarity of events like the attack on Planned Parenthood.

Getting back from the date, I immediately turned on the television to get an update on what had happened and was struck by the photo of Robert Lewis Dear. There's scant information law enforcement had collected on him was routine: 57. White. Three rifles. Had recently moved to Colorado from a North Carolina cabin without electricity of water. I think what struck me the most was how much he reminded me of one of my family members, even someone I had just spent Thanksgiving with. This family member - who makes it a point to loudly and publicly "just tease" me about my liberal politics - and I had just had a rather heated argument the day before on how "somebody needs to do something to take back this country." He said he "understands" people who bomb health clinics and that "they're patriots." When the defunding of Planned Parenthood took place earlier this year, he called me to tell me "it wasn't enough" and to reiterate "someone needs to do something to stop these bitches." So, when I say that the image on the news right now looks and sounds so familiar, it is because I - like so many others - have a Robert Lewis Dear in my family.

Which is why it's time for us to stop being polite and keeping the peace in our families, to stop hiding behind sympathetic posts on social media and instead have hard discussions about where we, as families, are at. To tell those close to us how afraid we are that, some day, we might see their mugshot on television after a horrific event. To communicate with the strong voice of unity how ashamed we are of elected officials like Illinois's 16th Congressional District Representative, Adam Kinzinger (R) who leapt at the chance to make a name for himself by attacking Planned Parenthood and express sympathy for, even solidarity with, alleged killer and terrorist, Robert Lewis Dear.

In an interview with CNN, Kinzinger criticized Planned Parenthood for "escalating" the shooting when they denounced "extremists" and the "poisonous environment that feeds domestic terrorism." Rep. Kinzinger demanded Planned Parenthood apologize for inspiring Dear to commit this heinous act, but in a very real sense, Planned Parenthood was pointing the finger at the Republican field of candidates who have, each and all, condemned their organization and made a case for relaxed gun laws and defunding of women's health, minimized domestic terrorism, participated in race-baiting, condemned the rulings of the Supreme Court on marriage equality, and aggressively incited nationalistic rhetoric that borders on ethnic supremacy.

Robert Lewis Dear admitted Planned Parenthood was his intended target after he surrendered to Colorado Spring Police, but Rep. Kinzinger has not retracted his statements or his sympathy for Dear, who multiple witnesses claim "stalked" a man crawling through the parking lot. According to Julie Turkewitz, a reporter for The New York Times, "He was focused on the medical clinic but indiscriminate with his targets, firing his long gun into the entryway before turning around and shooting through the windshield of the witness, a man who tried to flee after dropping off friends there." Three people died at the Colorado Springs Planned Parenthood on Friday. Nine were wounded, at least 30 employees of the facility traumatized, in addition to the number of retail workers in the shopping center and customers shopping on Black Friday.

Again, it's time to exercise one of the greatest qualities of humanity - we must be bold enough to confront the systemic evils of our time. We must start having conversations and address this epidemic of evil by first admitting it resides within our own families. At some point, we must cease stretching our fingers at "people like that" or the distant and generalized "people with mental health problems" and confront the perfectly sane, calm, rational individuals within our families who espouse the same views as extremists.

As President Obama said after Dear's surrender, "This is not normal. We can't let it become normal. If we truly care about this - if we're going to offer up our thoughts and prayers again, for God knows how many times, with a truly clean conscience - then we have to do something" and address the political and social hostility that has begun to boil over in America. At this point, we are succumbing to an American form of ISIS - radicalized individuals united by common cause to "do something and take back this country" from progress, equality, and national healthcare.

We are better than that. We must, individually, begin discussions with family members, friends, neighbors, and coworkers about the way that these ideological acts of terrorism are corrupting our nation and tearing us apart, that the threat of terrorism does not come from across our borders but from across the table. It is not sufficient to "like" a post or share an article through social media. We must talk about these things face to face with those close to us, with love and concern yes, with understanding and generosity yes, but with firm commitment to name our concerns and show this false sense of patriotism for what it truly is - domestic terrorism.