YOU CAN DO SOMETHING ABOUT IT is a series of frank interviews with passionate men and women who are leaders, activists and influencers on the subject of gun violence in America. Some have been my teachers, champions and support system on this very complicated and emotional journey and some I have admired from afar for their bravery, audacity and indomitable commitment to the cause. Although our backgrounds, experiences and the challenges we face in our work are as complex as the causes and the solutions to this epidemic, all have shown that there is more that can be done to end this senseless loss of human life.

I am proud to introduce you to each of them and excited to share their insights into how all of us can be a part of the solution to "Raise The Caliber" of our communities. 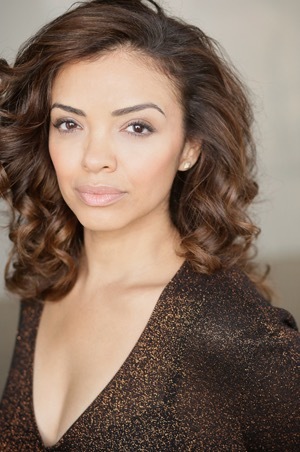 Where do you live? Los Angeles, CA

What are you most proud of about your work/life?
Raising three children in the entertainment industry for the past 15 years, I am proud that my husband and I have never felt any pressure to do or be anything other than our true selves in our marriage or as parents.

What is the biggest challenge you face in your work?
I took a long time off from my acting career to be a stay at home mom while my husband worked. I'm finding it incredibly difficult as a forty-year-old Latina, with a big hole in her resume, to restart her acting career. I fight discouragement by staying active in causes I believe in and always studying my craft. I know, from women I'm close to with a similar story, that jumpstarting a paused career may not be easy, but it isn't impossible.

Why do you think we have such a problem with gun violence in America?
I believe that our biggest problem with gun violence in America is that Americans can compartmentalize their empathy. It's very hard for people to feel community with people outside of their immediate experiences. I have always heard of communities being "safe" or "engaged," as if to suggest that communities afflicted by gun violence are responsible for the high crime for not being "as involved."
But the truth is that every family in this country wants the best for their children and community. When we hear about the death of a six year old, shot during school hours, does it matter if it was in Connecticut or my hometown of Chicago?


What do you think is the biggest misconception about why we have such a problem with gun violence in America?
I don't think I know many people who feel there is a misconception about WHY we have a gun violence problem in America. I think we are pretty clear that Americans who go out and purchase guns are buying into the propaganda that they need to protect themselves and their property, by any means necessary, even if it means using a deadly weapon against another human being.

Do you think there is a law that the government could enact that would really make a difference in reducing gun violence and building safe communities?
Absolutely. I would fully support a law that would require gun owners to pass a written test, a practical test, (including eye exam and clearance from pre-existing mental illness that would impair judgment. I believe that a gun owner should be required to show proof of life, health, home and/or renters insurance. Frankly, it should not be easy to buy, own, keep, or sell a gun.

What are three things the average American can do to "Raise The Caliber" of their community?
Talk to your children about everything! I have been very open with my children about where I grew up and how I feel about gun violence and guns in general.

Do not be afraid to ask your friends or family if they have a firearm in their home. If you are going to let your child attend a sleepover, have a play date or spend extended amount of time at a family or a friend's home, just ask. If they are responsible gun owners, trust me, they will tell you where they keep the gun, how it is unloaded, where the safe is, what kind of safe they own. You will never regret asking.

Finally, I try to know what I can about gun owners. I don't like to be painted with a stereotypical brush and dismissed for my values and positions, so I think it is very important to listen to gun owners and members of the NRA. Even if I find it difficult, I want change, so that means keeping an open mind and listening to all sides.

Is there a must read book or article on this topic that has educated and inspired you?
I like to follow different organizations dedicated to ending gun violence on Facebook and Integra. These include The Brady Campaign to End Gun Violence, Moms Demand Action for Gun Sense in America, Sandy Hook Promise, and Everytown For Gun Safety. I especially like the personal testimonials from parents, siblings and survivors. It gives you a greater understanding of how important it is to understand the lifelong journey a survivor takes to recovery. A survivor goes through financial, emotional and social turmoil after living through gun violence. These are stories we need to listen to and find away to bring all of our disjointed communities together and bring change.

About The Author:Jessica Mindich began the Caliber Collection in January 2012 as a collaboration with the Mayor of Newark, NJ, Cory Booker, as a way to turn illegal and unwanted guns from our cities' streets into jewelry. Their vision was to create a virtuous cycle by funding gun buyback and amnesty programs from the proceeds of the sales from the Caliber Collection. The jewelry is made with the serial numbers from illegal guns and the metal from shell casings. The Caliber Collection donates 20% of the net proceeds to fund voluntary gun buyback and amnesty programs in some of the toughest cities in America. To date, they have taken over 1,000 illegal guns off the streets and have raised over $100,000 for police departments in Newark, Hartford, the San Francisco Bay Area and Detroit from the sale of Caliber products to customers in over 85 countries.
From the success of the Caliber Collection, Jessica created The Caliber Foundation, which offers support to victims, families and communities who have been affected by illegal gun violence. The Caliber Foundation is the proud recipient of grants from MTV, Shepard Fairey/Obey Giant and The Serena Williams Foundation. Jessica is also the founder of the Raise The Caliber initiative, a National advocacy campaign to end illegal gun violence. Proceeds from partnerships under Raise The Caliber are donated to the Caliber Foundation.
Jessica is also a guest editor for the Huffington Post on Crime and a frequent contributor to www.MariaShriver.com
www.calibercollection.com