Figueres was praised for her ability to bring warring factions together with warmth and calm, and for the pivotal role she played in securing agreement to limit global warming to below 2oC.

Buddhist meditation -- and its recent secular incarnation in mindfulness -- is clinically proven to help build resilience to cope with life's stresses. It's inspirational to know that it played a part in ensuring December's historic deal in Paris.

But Buddhists may also be on to something else very important for those of us interested sustainable living: we may have been using the wrong part of brain to crack the sustainability challenge.

I spent a month earlier in the summer as a guest at the San Francisco Zen Center - a monastery in the heart of the city.

I have had a long interest in Buddhist meditation, having sat a number of intense Vipassana meditation courses. I also have an academic background in neuroscience, so have followed the increasingly strong evidence for how meditation changes the structure of our brains and so how we perceive the world and behave in it. 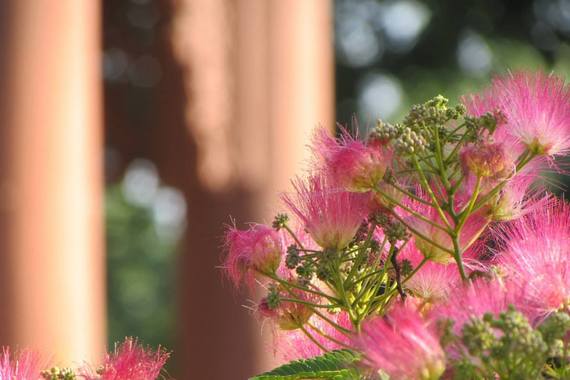 I was staying at the Zen Center as part of a trade. It is buying land to build 200 or so 'Zen-inspired Senior Living' units at the brilliant SOMO Village under development in Sonoma State, California.

SOMO Village's developers have created a visionary sustainability plan for the community, using Bioregional's One Planet Living framework. This is a set of ten intuitive and interrelated sustainability principles, from 'zero carbon energy' to 'health and happiness'.

For the Zen Center to be eligible to buy land in SOMO village, it must also create a response to the challenge of One Planet Living.

So, I traded food and accommodation to carry out a sustainability assessment of the Center's current operations in San Francisco and beyond. In this way, they could see how far they might need to stretch, and in what direction, to meet the requirements of becoming a true 'One Planet Community'.

What I learned was not what I expected.

First, the Zen Center performed better against the One Planet Principles than any other organization I have ever come across. Its commitment to happiness, health and community was exemplary. This was allied to a commitment to local, organic, vegetarian food, renewable energy, water conservation and care for nature.

Of course not everything is perfect, but the Buddhist tradition of compassion for all beings - not just humans - seems to help their exceptional aspiration and performance.

Second, I got to understand quite clearly the Buddhist belief, particularly expressed in the Zen tradition, that the intellect is only one way of perceiving the world. I had read the mind-bending 'Zen and Art of Motorcycle Maintenance' as a school boy and it had haunted me ever since. But I managed to put that ghost to rest.

During my time at the Zen Center I grew to realise that thinking engages only one part of our brain - and that thinking is very small and murky window through which to view and experience the world - exactly what Zen and the Art of Motorcycle Maintenance was communicating.

Thinking is the brain function we value most in our culture, yet we know that most of our decisions and behaviors are not rational. Using intellectual arguments can only very indirectly change our behavior.

Is there another way of experiencing and working with the world? Buddhists would say there is.

This involves developing the parts of the brain which experience the world without intellectualising it, judging it or dividing it. It is that experience of the world which sees us as part of space and time rather than as separate from it. It is an experience from which ego starts diminishing and compassion starts growing.

This is not airy fairy. It is actually closer to reality than we can ever get by thinking about it.

This is critically important for all of us. If, through meditating we start to perceive that we are part of the world, not separate to it, it makes it much harder for us to behave destructively towards other parts of it. The idea of harming other people, trees or the air would be, as some Buddhist teachers have described it, 'like my right hand chopping off my left hand'.

Our intellectualizing about environmental issues and hoping to change society and human behavior by providing information has been essential. But continuing to lead with information is doomed to fail. Decisions we make should not of course be opposed to what we think intellectually -- but meditating helps us change what and how we think.

So let us learn from the intellectual part of our brain but lead with another. Perceiving the world as being at one with it -- which is the reality -- might be the key we've been searching for. So don't give me any more facts, meditate!