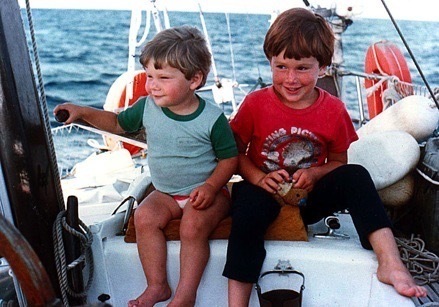 Thirty days. That's all it took. That's how long it took. It's all kind of how you look at it. One month in a lifetime is a blip. One month in the middle of the ocean, with nothing but water in front of you, behind you, all around you can be a long time... yet it really wasn't.

Our goal -- our challenge -- was to sail across the Atlantic Ocean from Dakar, Senegal, to Rio de Janeiro, Brazil, in one shot. Typically, most sailors cross the Atlantic from the Canary Islands to the West Indies, an almost three-week trip. We wanted to sail directly to South America from the closest point on the West African coast. Arriving in Dakar at Christmas 1982, we loaded up on provisions and performed the umpteen chores, maintenance, and preparations necessary to live one month at sea.

With no halfway stopping point from here to there, no island-hopping possible, no place to anchor, catch our breath and rest a day or two, it would have to be all at once. My husband, Michel, calculated a 30-day passage.

So many questions I have been asked about our 10-year voyage on Cowabunga, our sailboat. How do you cross an ocean with a 9 month old and a 3 year old? How do you live in such tight quarters as a family? How do you keep them from falling overboard? How do you and your husband get along? What do you eat? Don't you get bored...?

Well, getting bored was not an issue. No time for that. Living on land with two small children is time consuming in itself. On a boat without modern conveniences -- it's an all day job. Think of life in the old west: no refrigeration; no electricity; having to make one's own bread; canning, salting, drying; washing clothes by hand... It's a "survival" mode lifestyle. However, that was our life, not living in a car, running errands, working, paying bills, keeping appointments.

That was part of the purpose: taking the time to live.

For those who have never experienced the open ocean for days on end, it really isn't boring. Yes, it is water, water, and more water, but it always changes. It changes color, it changes tempo, it changes direction. It changes currents, the horizon, its population. The wind changes so the sails must be changed accordingly, which changes the boat's angle, and often the prevailing mood -- sometimes for better, sometimes for worse. Even out in the middle of nowhere, outside major shipping lanes, a ship does occasionally pass, and as the saying goes, you really do pass each other in the night.

Our non-sailing friends and family worried, imagining us affronting the high seas. In reality, the conditions were very calm, pleasant and ideal, enabling us to dine elegantly every evening: a stable table, proper place settings, and an open bottle of fine wine. 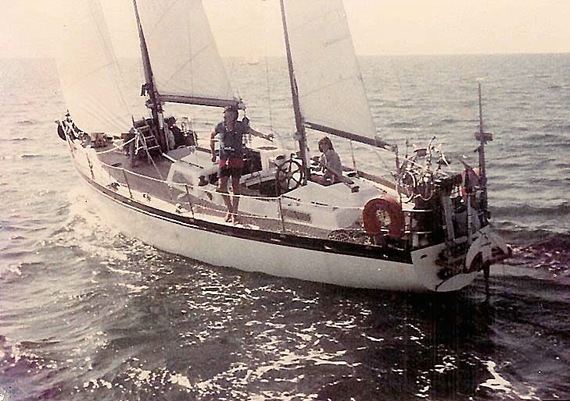 Along with procuring food and water for us four for a month at sea, we also had to stock diapers and all the necessities for an infant. And, we had to plan for the worst -- the "what-ifs": what if there was no wind, what if there was major damage, or worse yet, what if we were to sink (and have to seek refuge in the life raft)? We could conceivably be at sea much longer than a month, consequently, we planned provisions for two or three months, just in case.

Since we didn't have refrigeration, I planned food and meals accordingly. I would have to make bread daily, so I stocked up on flour, storing it along with supplies of rice, beans, pasta, etc. in plastic air-tight containers. I made similar calculations for eggs, milk, butter, fruit, vegetables and other staples.

There was a whole strategy for keeping fruits and vegetables fresh: buying them at the last minute, in various stages of readiness -- unripe, almost-ripe, and those to eat immediately. Cabbage and our homegrown sprouts would do for salads down the road. I canned and preserved meat, fish, and pre-cooked dishes. With one "starter" yogurt, I could make yogurt throughout the trip.

We had high hopes of fishing, but realistically, we couldn't depend solely upon that. Any caught fish would be a bonus. As an extra, we carted along two live chickens, designated to be our Sunday dinners the second and third Sundays of our trip -- and they were.

Eggs were always good fallback items, and since I enjoy baking, I would need many. Eggs can stay fresh for several months without refrigeration. I subscribed to the Vaseline method: coating each egg with a thin film of Vaseline, inhibiting any air loss (which contributes to rotting), through the shell. The eggs must be fresh, i.e. never been refrigerated. As an added precaution, we turned each egg upside down once a week, the theory being that a traveling yoke doesn't touch the shell, and can't rot. After estimating 200 eggs for two months, we carefully nestled them in their cartons, and coated them all with Vaseline.

In many third world countries that lack refrigeration, it's easy to find items we don't have in our "modern" environment that are ideal for boating. Canned butter, canned heavy cream, and "long-life" milk in quart cartons (similar to juice boxes) fit our needs. I also found some brined vacuum-sealed stew meat in cartons. 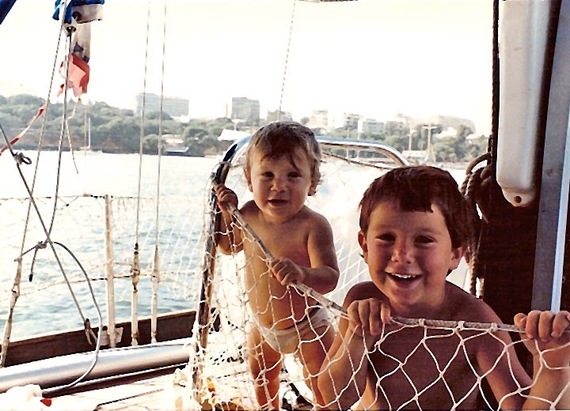 We lifted anchor on January 22, 1983, sailing into Rio de Janeiro 30 days later, the dawn of February 21 under the watchful eye of the Corcovado Christ statue. The passage was superb: calm, hot, and blissful. Between watch duty, cooking, fishing, meals, snack times, nap times, reading, repairs, sewing, and a host of daily chores that occupy a family and sailors, there wasn't a minute's worth of boredom.

There were fabulous sunrises and sunsets, schools of flying fish, dolphin escorts. Once we were mesmerized by huge manta rays jumping in the distance off the Brazilian coast. It was spectacular and as we sailed closer to them, they weaved in and out under our boat. Cowabunga, at 10 ft. wide, and 42 ft. long, was dwarfed by these giants as they glided beneath us in the crystal turquoise water.

Michel and I strictly maintained a nightly four-hour watch schedule. "Keeping watch," however, didn't mean constantly surveying the horizon. It meant keeping an eye and ear on things: on sounds that changed, on the wind direction, on the sails, on the automatic wind vane pilot, on the sleeping children, and also on the horizon. Any distant red or green light signaled a boat: red on the port side (left), green on the starboard side (right).

The colors indicate the boat's approaching angle. A full red-and-green frontal view signaled danger -- a possible head-on collision. But typically, once a boat is spotted on the horizon, we had 10-15 minutes before it could reach us, so we could continue reading, listening to music, etc. and scan the horizon 10 minutes later. We actually hoped to see a cargo or fishing trawler occasionally so we could initiate radio contact and confirm our position.

There was no GPS in these "olden" days of the 1980s. Michel accomplished all our navigation with an old fashioned sextant -- predicting within a day or two, and finally within just an hour -- our first sighting of Rio.

Our two boys were always busy. Sean, the oldest, played with Lego or his own little boat that he trailed in the water. He especially loved fishing and tweaking ropes and he always asked questions: about the sails, navigating, maps, and fishing. He and Brendan played well together, both spending a lot of time in our little inflatable bathtub cockpit "pool." 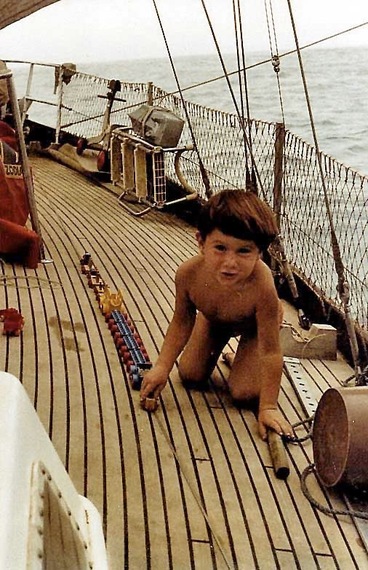 Brendan, now quite the crawler, became very adept at balancing himself with the boat's movement. Having come on board as a newborn, straight from the hospital, the movement was part of him as he crawled around, in sync with the boat.

Conserving fresh water was our priority and our supply was limited to interior fresh water tanks, and some jerrycans on the deck. Salt water for showers and dishwashing was the norm. Since baby shampoo lathered up well with salt water, that became our personal hygiene product of choice. After a good salt-water rinse, we followed with a very stingy fresh water rinse, and voila, we were clean!

We didn't really spend much time steering since our automatic wind vane pilot was our third crew member. Ingeniously rigged with ropes to the steering wheel at the rear, it synchronized with the wind via the wind vane, staying on course. Our job was to keep an eye on it.

February 3 was a milestone, our halfway point crossing the equator into the southern hemisphere summer. Day 27 at sea, February 18, we spotted the coast -- Brazil! Michel calculated we were 300 nautical miles north of Rio and that we'd reach Rio de Janeiro in three days. The evening of February 20, he predicted that coastal lights would appear around midnight. Near 1:00 a.m., February 21, I spotted a very bright light, but curiously, very high up in the sky. As we approached, and dawn shed the dark, the "sky light" proved to be the iconic statue of Christ. That was quite something to behold.

We were both quite taken aback, and emotional. We had arrived.

We did it, together, and as a family. 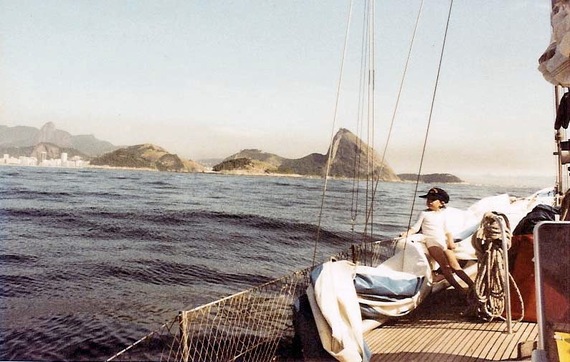