Imagine if you were forced from your home because of an armed conflict. What if you lost everything you own as a result?

You flee to another land for safety. There you find refuge and the helping hand of charity. You get the basics of food, water and shelter.

But then imagine that one day you are told that the food rations will be cut. How will you feed your family? Think of your despair.

That's what is happening to Syrian refugees throughout the Middle East. Low funding from the international community has forced the UN World Food Programme (WFP) to reduce food aid. Syrians feel abandoned by the world. 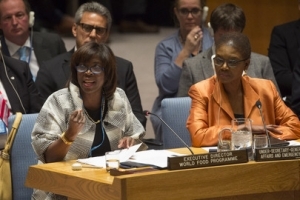 There is no peace for them, and now there is less and less food each day. And less hope.

We should heed this warning. WFP needs support to feed 4 million Syrians in the war-torn nation, and over 2 million others who have fled to neighboring countries. The UN food agency relies entirely on voluntary donations from governments and the public.

There has not been enough donations so far to keep pace. As Cousin stated before the Security Council, "Current funding commitments do not reflect the humanitarian needs of this prolonged conflict."

The world has already failed the Syrian people by not achieving a resolution to the four-year civil war. Now the world is failing them again on food aid.

With less food, Syria's war victims are forced into desperate situations. Young daughters are being married off, and children are being recruited into armed groups.

If we fully funded humanitarian aid, we could keep Syrian children in school with food and education. But it takes a strong political will from the international community to provide food and build peace. There is just not enough right now.

There is a lack of leadership to meet the peacemaking and humanitarian challenges of the biggest conflict of our time.

The result is that Syrian children are becoming malnourished, which stunts them for life. As Dwight Eisenhower once said:

How can we expect children who are reduced almost to an animal life level of existence, who struggle each day for any kind of food that will keep them alive, how can we expect them in the future to be apostles of peace?

We need a political solution to Syria's war. Meetings will be starting in Geneva during May to hopefully jumpstart a peace process that has gone nowhere.

There has to be a new government in Syria. That is the only path to saving the country and ending the bloodshed. The entire international community has to get behind this in words and actions.

The terrorist and extremist groups such as ISIS are not part of the peace process. ISIS has placed towns under siege, blocking them from receiving humanitarian aid. The U.S. military says ISIS is weakening in Syria and Iraq after air strikes. But if the civil war continues, it will give them a chance to keep going amid the chaos.

But whatever hopes for peace remain rest on the basics of food, especially for children. The greatest international peace effort in history, the Marshall Plan to rebuild war-torn Europe, was based on a foundation of food and hope. It worked.

We cannot expect anything less today. Food will reinforce peace hopes for Syria. Without it, the chance for peace will be doomed.

As Cousin reminds us, "We cannot ask parents to raise their children in a region without food and without peace."