Simon Kuper writes in the Financial Times that because of "the economic crisis and technological change," we are no longer our jobs. He argues that since workers have lost so much leverage, they often can no longer choose the professions they truly want to be in, and even if they are in their professions of choice, those careers are becoming less fulfilling because of their increasing demands, sinking pay, and vanishing job security.

You can see the loss of worker leverage in this chart from the St. Louis Fed: 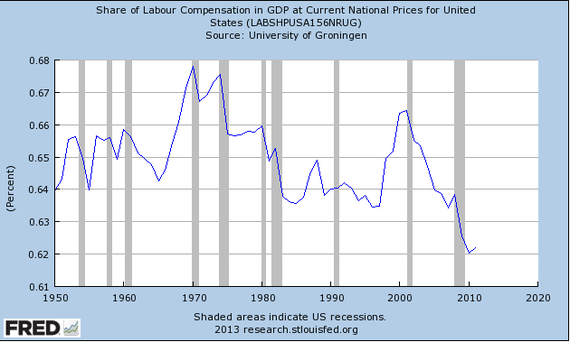 Workers' share of compensation has plunged to a record low compared to that of the owners of capital, such as property and stocks, and is only barely starting to recover.

There's a valid argument to be made that we never should have been our jobs in the first place, and that we should define ourselves by our relationships, hobbies, and outside interests instead. Why should what we do to survive define who we are? We should work to live, not live to work.

So, taking that argument a step further, perhaps it's a blessing in disguise that work isn't our only identity anymore. Perhaps we now can focus again on what matters most to us, since employers never would have hired us to pursue exactly what we wanted to do anyway.

But now that workers have lost leverage due to high unemployment, they also have less time to pursue outside interests. Making enough money to eat, have a roof over your head, and support your family usually takes precedence over everything else. And those necessities have become more precarious. So work is becoming an even bigger part of people's identities, but not by choice.

With three unemployed people for every job opening, the jobless and the underemployed have to work even harder to find a job that matches their skills and former income: a job that may never materialize. And many full-time workers--even in elite jobs--have to labor under the assumption that their lives basically are their bosses' to dictate. For many, working nonstop during the day, late, and during weekends has become the norm.

When workers are under that much pressure, they are less likely to pursue outside interests, be attentive to their friends and family, and cultivate new relationships. You can see it in the fact that Americans spend only 21 minutes per day socializing and 6 minutes on forms of leisure not covered by the American Time Use Survey. And you can see it in the fact that the U.S. marriage rate and birth rate have plunged to record lows. When fewer people are economically secure, fewer are willing to make long-term commitments.

So workers still are their jobs, due to the sheer amount of time they have to devote to work. But now it's to try to maintain their standard of living, rather than because they love their jobs and can't imagine doing anything else. When employers have all the leverage, they can make you spend so much time doing whatever they want that you don't have enough time for anything else.

Thanks to the lousy economy, we aren't just making less money than we otherwise would have. We also have less time to become who we are meant to be.