Understanding the 'āina --land and oceans--that feed us, body and soul, will make us better guardians of the planet. Dr. Peter Sale said so. Hannah Kihalani Springer said so. Edwin Ekolu Lindsey said so. Each of the three speakers on the "kūpuna panel" contributed to a public conversation about building bridges between generations, and between Western science and indigenous ancestral knowledge and practices, in conjunction with the 13th International Coral Reef Symposium held in Honolulu recently. The Symposium is the primary international meeting held every four years to bring together coral reef scientists, policy makers and managers from around the world to share research findings, case histories and management activities with the goal of addressing coral reef sustainability. The kūpuna panel was an extension of the conference theme of "Bridging Science to Policy." 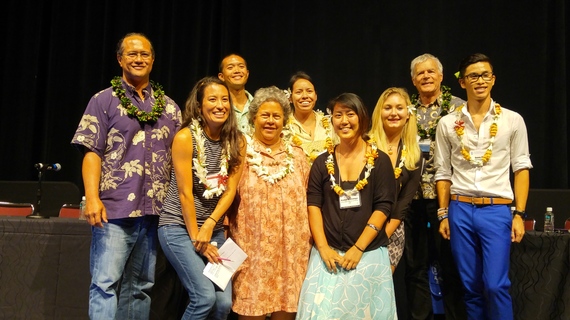 Kūpuna and college students reflect on the challenge of continuing the effort to be mindful stewards of the planet. Haunani Kane,(front row, left) graduate student in Geology and Geophysics at the University of Hawai'i at Mānoa, who has served on the Hōkūleʻa, was the moderator.

It is easy to lose heart when looking at photographs of bleached out coral that resemble ghostly kingdoms underwater. Those images tell us that the need is urgent. But all is not lost. To remind us of that, the organizers ensured that to get to the conference ballroom one had to pass a gallery of magnificent photographs of what Marine ecologist and author of Our Dying Planet, Peter Sale called the "sheer wondrousness" of coral. It is that sense of both the beauty and the bounty of the coral reef that we have to convey to the next generation to ensure that they are better stewards of the earth than we have been in recent times.

While Peter Sale traced the academic research paths he and his colleagues have taken over the course of their careers in different geographies, Edwin Ekolu Lindsey, president of Maui Cultural Lands, and one of the founders of the Polanui Hiu Community Managed Makai Area, and Hannah Kihalani Springer, from North Kona on Hawaii island who serves on the Ka'ūpūlehu Marine Life Advisory Committee, spoke in very personal terms about preserving values passed down through their families. Hawaiians, they both pointed out, refer to wealth by repeating the word for water--waiwai--signifying how critical fresh water is to the well-being of people, and the communal responsibility, or kuleana, to care for this natural asset.

Perspective matters. Today's generation, in the absence of memories of how bountiful the marine resources once were, sees an abundance of fish. By contrast, said Lindsey, "My father [the late Ed Lindsey, renowned conservationist] looked at the waters where he once fished and said, 'The fish are disappearing and we must do something now!' That's the crucial difference in how we see and understand that he believed needs to be addressed."

Her voice resonant with history and hope and resolve, Hannah Kihalani Springer began her remarks by tracing her ancestry and the place, Ka'ūpūlehu, where she and generations of her family have lived and fished and fed their families. 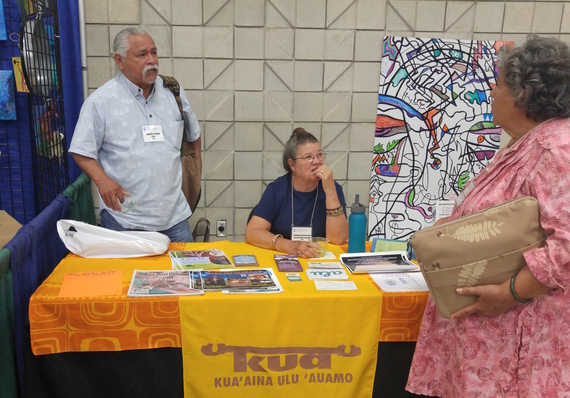 The KUA booth at ICRS offered a community mural designed by Solomon Enos that invited visitors to color in his depiction of the freshwater that connects land, practice and people throughout the watershed, from the mountains to the reef. Seated is Makaʻala Kaʻaumoana, Vice President of the board of KUA and ED of Hanalei Watershed Hui. Looking on are Charlie Young and Hannah Kihalani Springer, both members of the E Alu Pū Council.

"The reef is where we go to attain, to maintain, to retain, to restore, to rejuvenate, to refresh," she said. She spoke of her community not just surviving, but adapting to change, exhibiting a resilience that is passed on in stories "from the lips of one generation to the ears of the next." She spoke of changes in livelihood, the advent of ranching, the protection of the Waters of Kāne, a column of fresh, clean water that fed a parched land, and more.

In contemporary times, she pointed out, the highway has brought vehicular traffic to a once remote community--and with it a slow forgetting of customs and practices that allowed the community to ensure that its "icebox," the ocean would always be able to feed their families. "People forgot that they could not just take the fish. They have to take care," she said.

Springer, who is a former trustee of the Office of Hawaiian Affairs and the Nature Conservancy of Hawaiʻi explained: "That's why we built bridges between the scientific community and our leaders in the community who remembered what the ancestral practices were that had worked so well for generations. Our response has been to "Try Wait"--a 10 year respite for the reef to let it recover-- that was recently accepted by the Department of Land and Natural Resources. Now that community-developed plan awaits the governor's signature," she added. 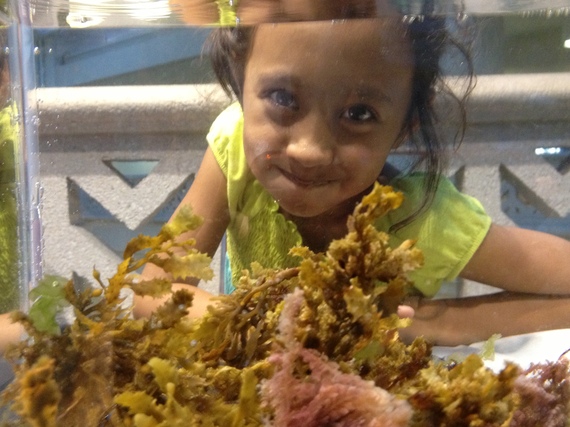 "From the lips of one generation to the ears of the next." Nakili Enos gets an up close and personal look at some of the limu her mother, KUA Deputy ED, Miwa Tamanaha, and Wally Ito had gathered from the North Shore for an educational display at the event.

Find out what is already happening in your community--and get involved
The examples and stories of the kūpuna prompted the students who shared the stage with them to ask how they could help. The kūpuna were of one voice in recommending that the students go out into their communities, find out what is being done and get involved in ways that best draw on their talents and interests. To the question of who should start the dialogue, who should initiate the bridge-building between the scientists and the local community, the students were reminded that it takes two sides to have a dialogue. Both the scientists and grassroots community groups have to ha`aha`a (humble) themselves to reach out so that the bridges for collaboration so essential to solving the problems that face us can be built from both sides, they said.

In his opening remarks, Peter Sale had shown how the apparently random comings and goings of pelagic larvae are in fact not random at all. They follow a very purposeful path. The ability of the little manini fish to find its way back to its home, to its ancestral past in the coral reef is a story of marine intelligence and perseverance that we would do well to understand and emulate.

Solomon Kaho'ohalahala, a member of the E Alu Pū network who was in the audience, brought the evening to a close with a personal note of appreciation for the fact that the humble, and under-appreciated manini, a word often used to signify that which is insignificant, had finally received its due.