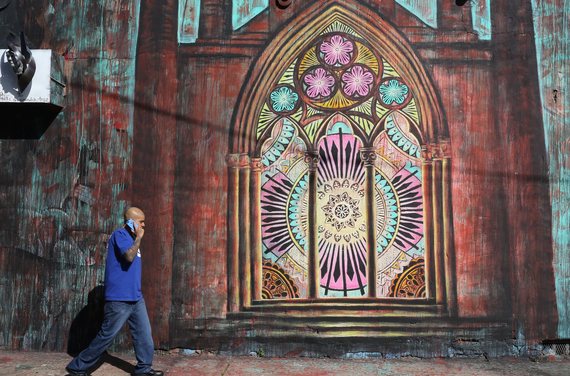 If you didn't catch a report from the Pew Research Center last month on what seems to be an important new trend in American religion, feel free to forgive yourself -- and not just because the report was released on April 15. Tax day or not, Pew found that most Americans are not paying much attention to religion. We're not talking about it. We're not even arguing about it anymore. For more than half of us (49%), talking about religion outside of our families is totally not a thing. And, for a large plurality of Americans (40%), religion seldom or never comes up within families either.

But even these numbers don't quite show the extent of the growing national silence around religion -- of a very particular sort. Pew sliced participants in their recent "Religion in Everyday Life" survey into two very broad categories: the "highly religious"-- the 30% of Americans "who say they pray daily and attend religious services at least once a week"--and the 70% of Americans who are, on the basis of prayer practice and church attendance, counted by Pew as "not highly religious." As would be expected, the "highly religious" are highly chatty about religion, especially those on the Evangelical Christian and otherwise more conservative end of the religious spectrum.

But even these folks have given up on talking with the unwashed majority about religion. Some 90% told Pew researchers that they wouldn't bother to try to change the mind of someone with a different religious perspective, adopting instead an "agree to disagree" stance (70%) or avoiding such conversations altogether (18%). Here, the highly religious are not unlike many Atheists and Agnostics, who also take a "live and let live" (66%) approach to religious difference and often minimize potential conflict by not broaching the subject of religion at all (30%).

Provocative though this data may be for those concerned about the apparent decline of religion in America, we'd do well to approach it with some caution. First off, the categories Pew constructs are incredibly broad. We might think of the "not highly religious" cohort as largely nonreligious, and no few of them would identify as such. Still, Agnostics, who may have an active curiosity about the possible existence of a supernatural being or force, are very different from Atheists, who see the question as fully settled. Both would be nestled in the "not highly religious" category along with people who understand themselves as spiritual and who have some manner of more or less regular spiritual practice, as well as with those who might well have been marked as "highly religious" had they not become frustrated by their church experience--the "Dones," as Thom Schultz calls them--and entered a self-imposed exile from institutional religious life. (However, we also might fairly assume that some Dones are, in fact, done with institutional affiliation precisely because they are so highly religious.)

Finally, nearly three-quarters (72%) of the "not highly religious" category are people who are affiliated with an institutional religion. They might not attend services every week or pray with regularity, but their religiosity is almost certainly different from that of Atheists, Agnostics, spiritual Nones, and languishing Dones.

All of this makes the "not highly religious" category rather a muddle.

Clearly, dividing Americans into "the highly religious" and "everybody else" hardly gets at the range of experiences that people might consider "religious" or how such experiences enter into every day conversation. Indeed, as HBO's John Oliver recently explained with characteristic panache, the drive to present what seem to be statistically significant results often presses researchers to employ a practice called "p-hacking" or "data dredging." This involves expanding or narrowing a data set in order to amplify more attention-grabbing results--as when researchers compare a more or less homogeneous category of Americans amounting to 30% of the population to a widely heterogeneous category that makes up the remaining 70%.

But the construction of Pew's categories is problematic beyond population proportionality and diversity of religious practice. What constitutes "highly religious" practice in Pew's data also begs scrutiny.

For Pew, "praying daily and attending religious services at least once a week" are the what earn one entry into the ranks of the "highly religious." Now, certainly, if someone told me she prayed every day and went to church every week, I would likely see her as pretty religious. But what about people who meditate everyday or practice yoga several times a week and who see these activities as part of their spiritual or religious make-up? Suppose I never attend church services but, on the basis of my deeply held moral convictions (these, perhaps, religiously grounded), I volunteer at a food pantry or advocate for the working poor? Is that religious enough to be "highly religious"?

Nones in Pew's "Religion in Everyday Life" survey were slightly more likely (29%) than were the "highly religious" (28%) to consider "whether a company pays a fair wage" in making purchasing decisions and were more than 10% more likely to recycle "whenever possible" than their "highly religious" neighbors. Are such moral goods outside the realm of the religious in American life?

Do surveys like those produced with regularity by Pew, Public Religion Research Institute, the Baylor Institute for Studies of Religion, commercial pollsters like Gallup and Harris, and a host of other organizations so over-determine "genuine" religiosity in terms of institutionally defined propositional beliefs and congregational practices that we're missing what religion is in the process of becoming in America through practices that often look nothing like those counted by demographers?

Yes, it seems clear that the demographic blip that goosed up religious affiliation and identification in the 1950s in the United States is coming to an end. Congregations are centers of religious and spiritual practice for fewer and fewer people. Arguments about competing religious beliefs seem less and less worthwhile to people across the religious and nonreligious spectrum.

Religion has gone rogue. But we can still hear its voice.

Myriad practices attest to a vibrancy in America's quest for human and planetary flourishing that will not be silenced. That most of us have come to see that bickering over institutional religious rules doesn't contribute to that project is hardly to sound the death knell for American religion. But it does make clear that too many religious leaders, scholars, and researchers are tone deaf to the new conversations that are remaking religion all around us.