Ever since the race for the Republican presidential nomination began, one thing in particular has been bugging me.

It's the statement that we need to "make America great again," which implies that America isn't great now but was at some unspecified time in the past.

Of course I know our country has problems -- huge problems. I'm not closing my eyes to unemployment, poverty, discrimination, crime, violence, addiction, and all of our other issues.

But nostalgic rhetoric that refers to some undefined moment in our country's history does nothing less than negate the progress we've made since the birth of our nation 240 years ago; when the founding declaration that "all men are created equal" became a cornerstone upon which our nation was built. 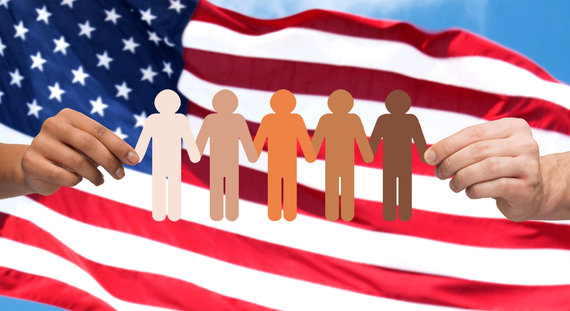 Since those words were first written in the U.S. Declaration of Independence, countless courageous, determined people have advocated, marched, fought, sacrificed, and died to attain equality -- and give us all the freedoms we have today.

Just think about the very birth of our nation. In order to break free from British rule and unfair taxation practices, Americans with little to no military training were willing to take up arms and fight the highly trained, well-armed British forces. Historians estimate that over the course of the entire American Revolutionary War, 6,800 Americans lost their lives in combat and another 6,100 were wounded. Thanks to them, we ultimately won our independence.

Consider the struggle for the abolition of slavery. Think about the many slaves who led revolts against slaveholders while knowing their punishment would be brutal at best and deadly at worst. Think of Frederick Douglass, a former slave and prominent abolitionist, and people like Harriet Tubman, who helped slaves escape by way of the Underground Railroad. Lasting centuries, the road to freedom for all was long and difficult -- but successful. In 1865, slavery was officially abolished with the adoption of the 13th Amendment.

Or think of the movement for women's suffrage. Strong leaders like Susan B. Anthony, who was arrested and tried for voting in 1872, led a decades-long struggle to gain voting rights. It wasn't until 1920, after tireless campaigning and picketing, that the 19th Amendment was adopted, stating that no citizen would be denied voting rights based on gender.

In 1941, the U.S. joined the Allies in the fight against Germany, Japan, and Italy in World War II. Like many other young men, my father, just 17 at the time, changed his birthday so he could enlist in the Navy and fight for freedom. And though he didn't come out of the war unscathed, he did come home again. But more than 400,000 U.S. servicemen gave their lives to liberate other countries and remove the threat to our own people from an enemy that was unlike anything the world had ever seen before.

Think of the 1960s Civil Rights Movement. Thousands upon thousands of people fought to end segregation and discrimination of African Americans. From Rosa Parks to Malcolm X to Dr. Martin Luther King Jr., the courageous people who dared to lead, who dared to speak out, who dared to stand up for their rights, initiated massive changes in our society. Two of those changes were a ban on discrimination based on race, color, religion, gender, or national origin -- effectively ending segregation -- and the securing of equal voting rights.

Of course, as a bisexual man and LGBTQ advocate, I have to mention the fight for equal rights for our community. From the early days of the Stonewall riots in 1969 to the first Pride Marches in NYC; from the declassification of homosexuality as a mental illness to the protection of gender, gender identity, and sexual orientation in hate crime laws; from the end of "Don't ask, don't tell" to the recognition of same-sex civil unions and marriages, prominent figures such as Harvey Milk, Bayard Rustin, Del Martin, Phyllis Lyon, Sylvia Rivera, Ellyn Ruthstrom, and Faith Cheltenham, as well as countless non-famous LGBTQ Americans and allies have dedicated their lives to our cause.

This is just a handful of the movements and people who have brought about positive change in our society. Still today, thousands upon thousands of Americans are fighting to achieve true equality, whether that's legislative, economic, societal, or all of the above. Many African Americans, Native Americans, and other minorities continue to face discrimination and are severely disadvantaged. More than 47 million Americans -- including 15.5 million children -- live in poverty. Women earn 21 percent less than men -- while doing the same work. The discussion surrounding the disrespectfully nicknamed "bathroom bill" illustrates the lack of acceptance and respect transgender and non-gender conforming people face. And there are many more individuals, groups, and communities fighting for their right to be recognized for who they truly are and have the same shot at life, liberty, and the pursuit of happiness as everyone else.

Yet while it's been a long, challenging road since the words "all men are created equal" were first written, the point is that here in the United States of America, we can stand up for our rights and we can bring about change. After all, we've been doing it for 240 years!

Thanks to those who went before us and those who continue to fight for equal rights today, we've become a diverse nation. And as more and more studies show, diversity is key to innovation and advancement. That's why I believe that regardless of who the Republican party names as its candidate, it would behoove that person to recognize the fact that stating we need to "make America great again" implies regressing to a society with fewer liberties and where equal rights were further away than they are now. Stigmatizing groups or communities will fracture our society and weaken our nation. Celebrating and promoting our diversity, in contrast, will make us stronger and more resilient.

We the People are America. And while we individually all face challenges, when together we cherish our diversity instead of fighting each other, we make America great every day.