Welcome to the apex of corporate persons in the United States.

Their ascension into a pseudo homo-sapiens status peaked in the Supreme Court's pivotal Citizens United ruling in 2010, which granted them Constitutional protection for limitless political free speech -- in the form of money.

The ruling opened the floodgates to unrestricted campaign donations, and consequently, our multi-billion dollar elections. Today's candidates are more likely to pal around with corporate lobbyists and fat cats in order to finance their campaigns than spend their time in public, knocking on doors, shaking hands, listening to, and representing 'We the People.'

Hundreds of thousands of outraged Americans are signing an "End Corporate Personhood" petition to correct this stunning lapse of good judgment by the Supreme Court. 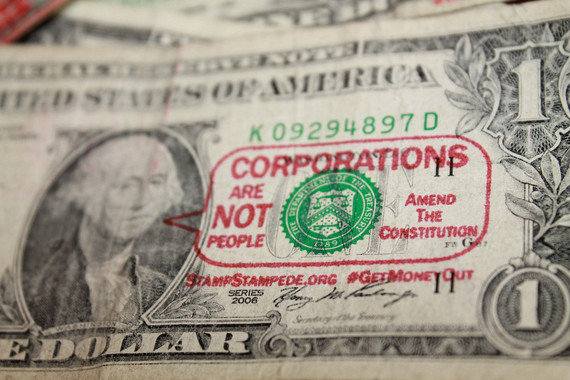 The problem with Citizens United is how it officially shifted legislative and judicial priority from human flourishing to corporate flourishing. In the past, all rights given to corporations have always been undergirded by the goal of primarily serving the American people. Limited liability for corporate shareholders leads to more investors, and we all technically benefit from the resulting vibrant economy. On the other hand, corporations do not have the right to "plead the fifth" and must disclose their finances and corporate documents when under investigation for wrongdoings that could harm the public.

We have all heard the popular chant, "Corporations are not people." I would add, "...and should have distinct and secondary legal consideration to people"--but that would be the longest and worst slogan ever coined in history.

Citizens United brought about a new order. It established a corporate right that privileged corporations--as if there was a newly recognized corporate personhood that trumped "We the People." The result has been an influx of corporate money in our elections, which has distanced legislators from the people's interests and voters from political candidates bound completely to big money. Citizens United has hurt the American people.

And "corporate personhood" is referencing the Supreme Court's impudence in assessing and advancing corporate motivations alone without thought to how these new privileges could harm the public. Their decision is troubling and flawed in obfuscating that essential criterion when extending any and all rights to corporations.

We need to put a stop to this by banding together and invalidating the Citizens United decision, along with other Supreme Court rulings that recklessly justify the favoritism of corporations over people. Sign the petition to end corporate personhood. And help build a movement for a 28th Amendment to the Constitution to state definitively: Corporations are NOT people, and; money is NOT free speech.