Last week the Portuguese people learned that their former Ministry of Finance accepted a job at Arrow Global -- a leading global debt purchaser and manager that benefited from the unsuccessful efforts of that same government official, during her tenure as Minister, to save the Portuguese banks BES, BNP and Banif, which was the last to collapse in 2015. Arrow Global's business model depends on the poor performance of already fragile banking systems, such as the Portuguese. It is this same company with which the former Minister (a government official!), who possesses critical, private, sensitive and insightful information, including State secrets, will now be sharing her professional experience. Despite any fundamental ethical considerations, Maria Luís Albuquerque's (MLA) actions, according to Portuguese law, are not illegal. In fact, she is supported by many of her social democrat comrades, including their leader and former Prime Minister, Pedro Passos Coelho...

There's more! Ms. Luís Albuquerque, who has been a sitting member of the Parliament since November when the social democrats lost their tenure in power, will almost certainly be permitted by the Parliament's ethical committee to keep her seat. Arrow Global, whose business results depend positively on the misfortunes of the Portuguese people, will have for their advisor a former Secretary of State of Finance, a former Minister of Finance and a current legislator. Three 007 secret agents in a single person - a great bargain for Arrow Global indeed!

If the 'revolving door' is already very problematic from an ethical and legal standpoint, what should we make of the door that is not really 'revolving' at all? That is, when the legislator gets to keep her job in the parliament, while simultaneously accepting a new job in the private sector?! It would be reasonable to assume that this scenario would be unthinkable, not to mention illegal, in a western European country that, despite its relatively recent democratization, joined the European Union in 1986. But it is not! It would also be reasonable to assume that political adversaries would 'go crazy' with such a precarious situation, which is a potential threat to national security. But they are not! The reality is that the status quo benefits both the left and the right. And the benefits are even more apparent now than ever before, given that more parties have gained access to power and influence. After all, communists (PCP) and leftists (BE) have just recently gained de facto participation in the government for the first time ever. One could also be led to believe that the Portuguese people would rise-up in outrage and take to protest in the streets. But they will not! How then, can we expect the system to change with such varied interests aligned in this confounding way? 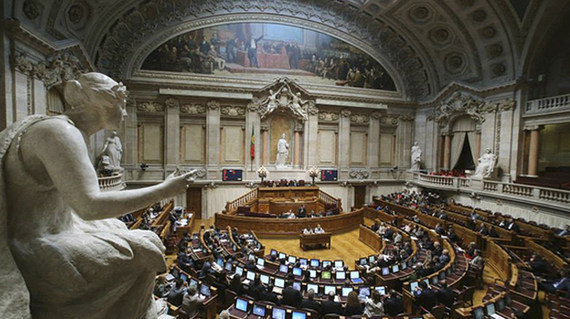 On April 2nd it will be forty years since a democratic Constitution was first adopted in Portugal, in 1976. And yet we the Portuguese people are still not being heard in our national parliament. Unfortunately, this does not come as a surprise! After all, it is not the Portuguese people who elect their "representatives". Instead, the Portuguese people vote on a short-list of candidates prepared by political parties and, even so, a large number of those who get elected end up in the government and not as "representatives" in the parliament. Still others, even less connected with the electorate -their problems and aspirations- are called as substitutes. It doesn't get much more un-representative than that.

The number of citizen protests, however, is not really the problem. According to the 2013 European Social Survey, the percentage of people who reported participating in at least one public protest grew significantly from 2008 to 2012. According to this source, the participation in a public protest more than doubled, from 2.4% in 2010 to 6.8% in 2012. A study by the Portuguese police shows that, in Lisbon alone, public protests increased from 244 in 2010, to 298 in 2011 and to 579 in 2012. Notably, these protests were largely against policy issues related with the global crises and the economic and social austerity measures that followed. Missing from the scene were protests in favor of institutional improvement or for the more fundamental changes needed in the Portuguese political system, changes which would improve political process by which undesired policy outcomes have been produced in the first place. Not surprisingly, by mid-2013 the swell in protests dwindled without leaving any significant impact on the political landscape precisely because they did not focus on root causes.

Even the new social movements, such as "Geração à Rasca - M12M" (2011) and "Que se lixe a Troika! - QSLT" (2012/2013), while massive in popular participation, were not able to change the labor/income unions-style tone of the protests.

When the Portuguese people protest in the street, but fail to attack the root causes for the their protest, they unwittingly leave unquestioned the very institutions that undermine their legitimate concerns, frustrations and aspirations as citizens and human beings. It is not enough for people to protest against undesired policies, if they do not also protest against the rules of the political system that produces those policies. The unfortunate pattern here, is that people do not protest against the current undemocratic electoral law, against the parties funding system, against the statutes regulating parliamentarians, against corruption, or against the lack of transparency in the appointments for the leadership of public companies, among other key cornerstones of the political system. One would think that we the Portuguese people would. But we don't!

Since April 1976, we the Portuguese people, as a group, stopped protesting in any significantly mobilizing way against our flawed, outdated, unfair and unequal political institutions. We willingly protest against what is being taken from us but we do not join forces for what we can advance together, on issues that transcend party lines. The seven constitutional amendments offer a very good illustration of this collective inertia. Five of the seven amendments (1992, 1997, 2001, 2004 and 2005) occurred mainly to adjust the Portuguese constitution to "external" factors - new European Union legal frameworks. The remaining two (1982 and 1989) occurred mostly to make adjustments not fully addressed in 1976, such as the extinction of the Revolution Committee, the creation of the Supreme Court and the advancement of free market and open economy principles. Otherwise, there has been very little institutional innovation from within, for forty years! The electoral law, now four decades old, was changed only once in this period: the 1989 reduction in the number of seats in the parliament from 250 to 230.

Since 1976, our protests have always been for the same reasons: higher salaries, better labor conditions, pensions, benefits and services, lower taxes, against inequities of spending cuts, unemployment, public services reduction and alike. We have not been protesting for what really matters though. And the paradox is that what infuriates the Portuguese people the most is not economic and social issues. Rather, it is the profound lack of leadership and ethics in our political system that demoralizes us the most.

As described above in the 'MLA case', the most fundamental laws of democratic transparency and accountability are so inadequate in Portugal that they have become ethically prohibitive. The Portuguese Nobel prize winner, José Saramago, once appealed to 'turning every citizen into a politician'. In our homes, we are all politicians already, as well as football coaches, but not outside, in public where it matters. It is time we stand as a collective meta-party and fight for what matters: We the Portuguese People.