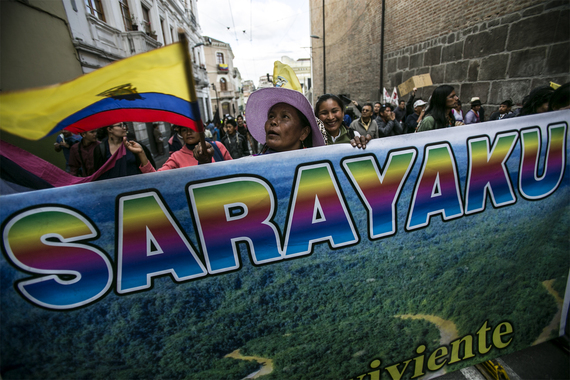 I spend time with my people, by the side of my family in the heart of the Ecuadorian Amazon. I play with the children that, full of happiness and curiosity, run barefoot, eat what they find in the forest and bathe in the big river without the permission of their parents. At the same time, I remember my childhood in that green rainforest full of life, which has so influenced my own journey. I'm on the same journey that many of our ancestors and parents have walked to fight for the wellbeing of our generation.

Our fight as indigenous peoples began a long time ago, when the colonizers arrived to our land to take over our resources and remove us from our homes with the invitation and support of the government of that time. Therefore, we carried out the indigenous uprising in 1992, organized by the indigenous movement with its affiliated organizations across the country. With the leadership of the OPIP (Indigenous Peoples Organization of the Pastaza River), we took the necessary force to take to the streets. Indigenous peoples were tired of living under discrimination and oppression in their own land. Thousands of people walked from the Amazon to the capital Quito, demanding from the authorities recognition as ancestral peoples and land titles for their ancestral territories, among other demands. This was a great victory for the dignity and the life of us indigenous peoples.

This crucial historic event happened just a year before I was born. My mother participated in the march together with the majority of our family. Some of my family formed part of the OPIP and were key actors in the organization and implementation of this march. Elders, children, women and men walked in the cold of the mountains and the burning sun, with bloodied feet from their long journey. With great conviction, the mothers marched arm-in-arm, carrying their babies at their breast and taking over the cities to get what they demanded.

Today, twenty-three years later, indigenous peoples together with other social sectors have organized to once again demand that the government listens to the voices of the people and respect the fundamental rights that the Ecuadorian constitution guarantees. Marching are mothers, fathers, sons, daughters, brothers, sisters, grandparents from the rainforest, from the mountains, from the cities, from the communities - all those really in touch with the Earth. These people are not defending any politician, any political party, any NGO, or any other interest beyond the right to defend their homes, their families, their values, and their right to live!

This struggle is very clear as we feel the same deception and frustration of seeing the incompetence of our government to exercise its entrusted role. In other words, their responsibility to lead and serve the Ecuadorian people. Just as during the time of the first uprising in 1992, this government has ignored the petitions and the demands of the people.

As human beings we have a right to freedom of choice. Under this government, we have lost even the right to express our opinions without running the risk of being put in jail. We are living under a regime that terrorizes the population so it can maintain power. How many leaders, students, and journalists, how many protestors, how many organizations and how many human rights defenders have been threatened or even detained and sentenced for only the act of defending fundamental rights? This is not a democracy that guarantees us our Constitution or international laws and treaties that Ecuador has signed.

We can't deny the good things that this government has done, for which it was elected by the people. But that fact simply does NOT justify the violations of human rights committed during these eight years. The people of Ecuador are tired of so much abuse of their fundamental rights. We demand immediate change, starting with the right to freedom of expression and the press, to stop and sanction the misuse of public funds, to halt extractive activities in Yasuní and stop the expansion of the oil frontiers in the south-central Ecuadorian Amazon, to stop the indefinite reelection of the President, the immediate release of all human rights defenders who have been unfairly judged, and to end discrimination and public humiliation of women through mass media and other means.

To dismiss this march and this uprising with the argument that it was organized by corrupt leaders of organizations is to dismiss all those who elected those leaders as our representatives. And it is important to mention that some of these leaders - those who have fought for many years and even participated in the 1992 march - have remained firm in their positions and have served their people with honor and without abandoning their values and principles in exchange for money or other luxuries.

Additionally, to say that this uprising does not have grassroots support of the communities and that it is an attempt of destabilization on behalf of the Right Wing is an insult to all of the people who have fought for their homes, for their lives, and for their dignity! The base communities, the indigenous peoples, the distinct social sectors of the country are the ones who are present. By ignoring the needs of the country and of the people and - even worse, by insulting and dismissing us - the President is committing a big mistake.

Because, Mr. Rafael Correa: As much as you are the President and as much as you hide behind a battalion of police and military, the crude reality of our country will catch up to you sooner or later.

It is the children that play in the jungle, in the mountains and on the city streets that are our future. They are the future of our country, and it is today's reality that will pave their future path. As such, we have to take care of them and the places where they are growing and learning as human beings.

For this and much more I'd like to ask everyone - youth, women, men, mothers, fathers, students, professors, workers, and everyone else: Let's lift up our voices and fight for the future of all those children who will one day take the helm to create a better tomorrow!

Original statement has been translated from Spanish.