I was 10 years old, enjoying a scoop of ice cream, when my dad, a marketing director, pointed at a poster on the wall, and said: "did you know that the ice cream in that picture is really mashed potatoes?" I sat there, spoon in my mouth, noticing that the image of the fake stuff looked better than the cup of ice cream in my hand.

Things aren't always what they seem, and what you see isn't always what you get. Some bakeries release a fresh baked cookie scent to attract customers, and the cakes on display are decorated Styrofoam. Perhaps it is the imitation of something that leads to the desire for the real thing.

When people see a fur coat, it is unclear if it was made of processed and dyed polymeric fibers, or 20 dogs. Trends go viral because people copy what they see, and fashion relies on trends. In his NY Times article published in September 2007, Eric Wilson explained how "clothing manufacturers believe that copying is the business model of the industry, where what becomes fashionable relies on the mass dissemination of trends."

Fur, was once used for survival. As humans advanced, so did technology, and an abundance of materials were developed to protect us from the elements. Clothing evolved from function to fashion, and the dilemma of ethics arose. The 60s brought the film 101 Dalmatians, where the evil Cruella De Vil attempted to kill puppies for a diabolic fashion statement, (which at the time seemed outrageous). Animal Rights groups emerged in the 70's with models claiming they'd "rather be naked than wear fur." Fur was something you might have found in your grandmas closet; and by the late 80's it was considered "taboo." In fact, women were scared that they'd get paint thrown at them by animal rights activists if they wore it.

"Faux" fur, made of synthetic fibers, allowed the mass-market to get the same look without compromising lives and ethics. Animal rights organizations, helped promote the synthetic trend, hosting faux-fur competitions in fashion schools and encouraging designers to use the material in their collections. For a while, it was working. But then things got confusing.

In her article for the New York Times, Julie Creswell documents cases of real fur disguised as faux. Dan Matthews, vice president of PETA explains how "the lines between real and fake fur have blurred. Fur farms in China raise dogs for clothing and label it as "faux" in the U.S. because that's what the market best responds to." 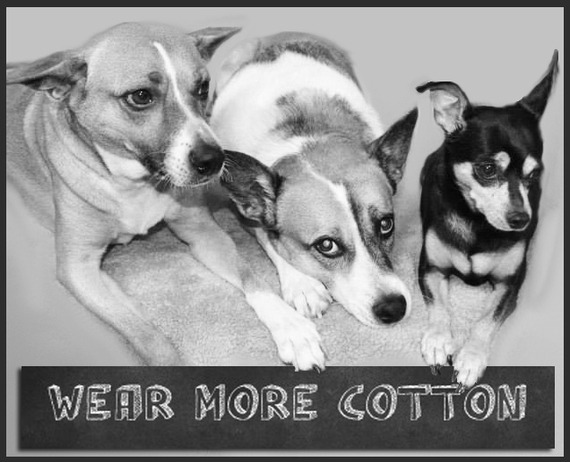 "Investigations found that dog fur is still slipping into the country on unlabeled and falsely advertised jackets."- The Humane Society of the United States

According to the Congressional Record Proceedings and Debates of the 111th Congress, on Wednesday July 28, 2010, a labeling loophole allowed any piece of clothing with less than $150 of fur to be labeled without mentioning that it included fur, even if it contained as many as thirty rabbits, three foxes or a wolf.

Now, fur is everywhere. Over 500 designers are using it proudly. The global fur trade is expected to rise exponentially, currently at an all time high, valued at 40 billion, according to the International Fur Federation. This season, the widely promoted "Fur Now" Campaign, portrays men and women covered in fur, hiding the ugly truth behind a facade of glamour and luxury.

I wonder if the wearing and promotion of the "faux," normalized the style, causing the explosive resurgence of real fur back to the center of our culture. I believe that wearing anything that looks like fur advertises the trend and encourages others to dress that way. Keith Kaplan, of the Fur Information Council of America, explains: "People are still buying fur. If people were not buying it, stores wouldn't want to sell it." A loss of market demand will slow the needless suffering, and I believe that eliminating the "faux" could help lead to the trend's extinction.

It is a tremendous responsibility to know that what we buy and wear has an influence on the kind of world we have. Trends are contagious. We inspire others through the choices we make. If you care about our planet and its beautiful creatures, distance your wardrobe from anything that looks like it was taken from an animal. They need their fur more than you and I do.

For more information on what you can do to help end the trend, go to www.EveyClothing.com, and please stay in touch on Facebook.

US Presidential Election 2020
Breaking news, analysis and the latest polls on the presidential race from HuffPost’s politics team
See More
Voting Made Easy
Register to vote and apply for an absentee ballot today
Register now
More:
Animal Welfarefashion trendsfaux furCruelty to animalsCruelty-free
Newsletter Sign Up
An essential daily guide to achieving the good life
Subscribe to our lifestyle email.
Successfully Subscribed!
Realness delivered to your inbox