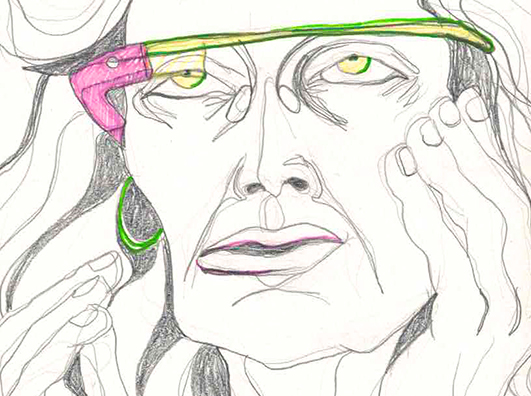 I thought he was insane.
The first time I saw someone talking on a mobile phone with a headset, I thought he was psychologically disturbed. Or terribly, aggressively rude. Or both. An executive from the company that had just acquired us, he would stand facing nothing in particular in the middle of the office having a loud, animated conversation with himself, obtrusively alienating the rest of the office.

Of course, that was 15 years ago. Mobile phones and headsets are now an accepted part of our world. Studies tell us that we'd rather leave home without our lunches, or our wallets than without our mobile phones. We now think nothing of a person staring into space as they talk loudly to someone the rest of us can't see. Mobile is normative; anyone without a mobile phone is a freak.

New technologies emerge. They get adopted and we adapt to them. And they change us. Think about it: The mobile phone has had a profound impact on how we interact, communicate, behave, think, socialize, work, politick... What aspect of culture has not been touched in some way by the mobile revolution? Even revolution itself has been affected.

Wearables will change us.
We are on the verge of the wearable technology revolution. Smart watches, Google Glass and personal sensors make headlines everyday. Not so much for their current clunky forms and limited capabilities, but for their potential. There is much speculation on what wearables will do, how they will work, how they will look (and how they will make us look). These are all critical questions. But I think the undercurrent that lurks beneath the current wearable conversation is a deep sense of anxiety stemming from one central question: namely, how will wearables change us?

Take Google Glass, for example. I don't think it's a coincidence that people who wear them have been dubbed, "Glassholes." It's not just that they look stupid -- someone (maybe Warby Parker) will fix that. It's that anyone using (much less wearing) a technology that disrupts the social contract is by definition, being a jerk. Think about how rude and annoying it felt the first time someone carried on a texting exchange with someone else while ostensibly talking to you. Glass (and other wearable technologies) bring up a plethora of new ways of breaching etiquette, allowing technology to come in between us (physically or metaphorically) and changing the way we interact. So there is valid reason for wearable anxiety.

Wearable hopes and fears.
But there's also plenty of reason for optimism. As I mentioned above, mobile phones have changed our behavior in so many ways, and many of them are overwhelmingly positive. And I'm not just talking about revolution. Our mobile phones allow us to connect, certainly. But also to create, to curate, to track, to organize, to research, to learn -- the list goes on and on. They carry so much of our lives in them that we think of them as an extension of ourselves. I don't know if I'm a better person because of my mobile phone, but I certainly feel like I have a better life because of it. It only makes sense that wearable technology will further the extension of technology-as-self. The potential benefits and applications of wearable technology in health care alone are mind-boggling. What about in enterprise? Or education? Where will wearables go? How will wearable technology change us as individuals, and as a society? And will it be for better or for worse?

Carrie Yury is Head of Research at BeyondCurious, where she gets to think about things like how technology changes human behavior. And where she can sometimes be seen drawing.