Wearing a yarmulka had been a great challenge for me, mostly since I stopped identifying as an Orthodox Jew. While living in Crown Heights, I have walked the streets without a yarmulka, which many people saw as the ultimate sign of rebellion from me -- the last straw and lamentable proof that Chaim Levin is not religious anymore. Many people could not understand why I refused to just wear it and show "respect" for the people in Crown Heights. My parents insist that I must wear a yarmulka while at their house, and I am happy to respect their wishes.

Wearing a yarmulka in public, on the other hand, has been something I have wrestled with for some time. I have always wrestled with the wind to keep my yarmulka from flying off. That inconvenience was not the struggle that drove me to stop wearing my yarmulka.

I could not understand why it was so important that I wore this thing to define my status as a Jew and, on the streets of Crown Heights, to be perceived as an respectful Jew. I often felt, if wearing a yarmulka were so important to the Jewish community, my parents and my grandparents who survived the camps and the evil reigns of the likes of Stalin and Lenin, I should wear a yellow star on my arm. While that might have been rebelliously, perhaps angrily bold and even offensive, it would have been something I understood.

The only rationale that I was never able to dismiss was that a yarmulka is a sign of identity; identity was something I was taught to proclaim and be proud of no matter what. Dressed as an Orthodox Jew, I walked around Paris while in yeshiva, despite the many issues I encountered from some anti-Semitic people.

However, I was kicked out of yeshiva after being identified as gay, and I encountered very many difficulties and alienation within the Orthodox community because of my identity. As a result, I wrestled with my identity as an Orthodox Jew, and eventually stopped wearing my yarmulka. Still, I was constantly reminded of it whenever I would feel the wind on my face and instinctively put my hand to my head in vain to protect a visceral part of me I no longer had.

I later learned, contrary to what I was taught, that wearing a yarmulka is not the exclusive signature of Orthodox Jews. Recently, I had the great honor and pleasure of meeting with someone who pioneered rainbow yarmulkas when we met to discuss my journey into the public eye and giving people hope. I was delighted and humbled when he gave me the yarmulka that he wore at his wedding this past July when he married his partner of five years. I put it on right then and there and felt like I never wanted to take it off ever again.

This rainbow yarmulka palliated the hole in my viscera and resolved some of the conflict I have been wrestling with. I have not wrestled alone. I am proud of the progress that gay people have made. I am proud of the gay Jewish people who have overcome their personal struggles. I am proud of, elated with and grateful for my wonderful parents and others from the Orthodox community I had believed would never accept me. Growing up Orthodox, I was taught identity was something to proclaim and be proud of no matter what. I understand that better now, and I am certainly prouder.

Wearing my yarmulka with pride, I have appeared in public for interviews during the past few months. I was surprised by some very harsh criticism and scrutiny that claimed I was misrepresenting myself as a fully observant Orthodox Jew. What I have realized is that wearing a yarmulka in public is a symbol of pride in my family, my Jewish heritage and the struggles Jewish people have overcome, and I am proud to wear my Jewish identity on my head. Others have suggested that the pride I have wrestled to find is an antagonistic ploy against the Orthodox community, in essence subverting Orthodox custom with the "gay agenda" right on the top of my head. If there were a "gay agenda," I would hope to be asked to participate, but it wouldn't change why I wear my yarmulka. However, there is no "gay agenda" other than in homophobic rhetoric, just as there has never been a "Jewish agenda" or Judenproblem other than in anti-Semitic propaganda. Still, even real agendas have little to do with the inherently personal decision to wear yarmulkas. My own choice to wear a rainbow yarmulka has nothing to do with how others might see it.

I wear my yarmulka because I am proud: I am Jewish and gay. I am equally proud of both identities and would not want see anyone discriminated against because of either. As time goes by, as more awareness grows and Jewish communities and the Orthodox community in particular acknowledges people who are different, people who are gay, people who are victims of abuse or authority -- as light is shed on the precarious realities faced by people within Orthodox communities -- I am more inclined than ever to wear a yarmulka and proclaim my pride as gay Jew. These two identities have been the targets of discrimination and violence for millenia and once seemed incompatible. My identity as a gay Jew grows stronger and prouder with each passing day. While I may not wear it all the time, I will always wear my yarmulka with pride. 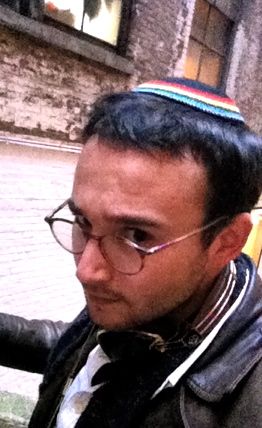