As the World Wide Web turned 25 years old last week, its founder, Tim Berners-Lee, had a dire warning. In the wake of recent reports on Internet spying by various intelligence agencies, Berners-Lee wrote in Wired, “We risk losing all that we have gained from the Web so far and all the great advances still to come." He argued that mass surveillance has the potential to critically undermine the founding principle of the Web -- the free flow of information -- because it reduces consumers' trust and therefore may speed up the "balkanization" of the Internet.

The term "balkanization" refers to the splintering of the Internet into nationally or regionally closed networks. Countries like Iran, China, North Korea and Cuba have long promoted their own "national Internet" to prevent users in their countries from accessing information that is available worldwide.

After the spying reports surfaced, nations like Brazil, Germany and France have also made moves toward a walled-off Web, albeit for different reasons than Pyongyang and Tehran. Most of the world's Internet traffic is now routed through the United States -- a fact the National Security Agency deliberately exploited in its spying activities. In response to the NSA scandal, Brazil and Germany established locally routed email services. In addition, Berlin partnered with Paris to propose the creation of a European data network that would allow European countries to route traffic without having to go through the United States.

“The national Internet is a slogan used by different governments for different reasons. … [T]here are differences in their approaches to the Internet itself,” Tim Maurer of the New America Foundation’s Open Technology Institute told The WorldPost. "Iran and China see a threat to social stability, while Brazil and Germany are more concerned about protection against surveillance and economic development."

A clear picture of the technology behind each "national Internet" proposal has yet to emerge. Some argue that such moves would require a huge shift in the Internet's global infrastructure, making them costly and practically difficult.

But what most concerns Web pioneers like Berners-Lee is a creeping erosion of the fundamental dream of the Internet as an open network for all people. “If more and more Internet infrastructure becomes subject to national borders this indirectly benefits governments in giving greater control,” Maurer explained.

Take a look at the infographic below for a better understanding of how countries have moved to split off from the global Internet. 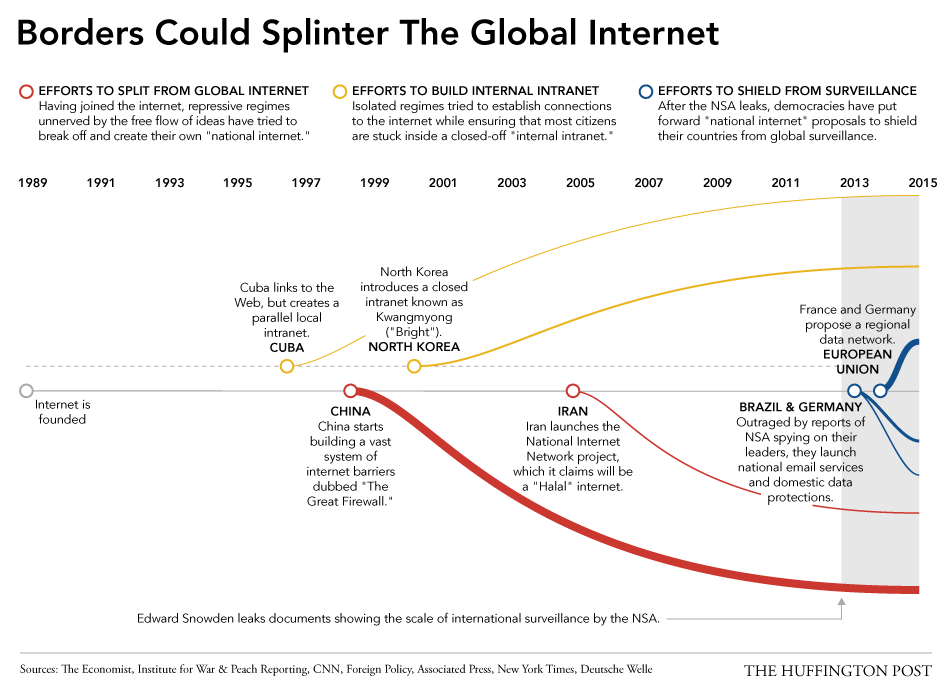 China joined the Web in 1994. A mere 4 years later, Beijing introduced the "Golden Shield" system to control the flow of traffic in and out the country. The system developed into the world's most sophisticated information barrier and is dubbed the "Great Firewall."

Cuba got its first Web connection in 1996, but most Cubans can access only a local intranet, which supports email and some official websites.

North Korea introduced a closed intranet in 2000. It is known as Kwangmyong ("Bright") and supports email and a handful of filtered websites. While the country established a connection to the global Internet in 2010, traffic is still routed via a government ministry and available only to a small group of academics.

Iran launched the National Internet Network project in 2005 after conservative Mahmoud Ahmadinejad was elected president. Despite the election of the more moderate President Hassan Rouhani in 2013, Iran has vowed to continue with its "Halal" (or religiously permissible) Internet, borrowing expertise from China.

Outraged by reports of NSA spying on their leaders in 2013, Brazil and Germany set up locally routed email services and aired proposals to stop Web data leaving their borders.

France and Germany in February 2014 expressed their support for a regional data network in the European Union, the so-called Schengen routing, named after the open border zone.

Map Of The Internet