The online webcomic site is now available on your cell phone. Right now it's only available on Android phones, but other platforms are coming.

Comic Rocket's mission is to be "a sort of Google for digital comics." From their site: "Comic Rocket is a crowd-sourced indexing tool for users to find, read, bookmark and share their favorite webcomics. Users maintain reading lists that track their place in the archive of each comic as well as how many pages they have left to read."

I spoke with Comic Rocket's Chief Creative Officer and one of the co-founders Andy Grossberg (his founding partners are Tim Shields and Jamey Sharp). 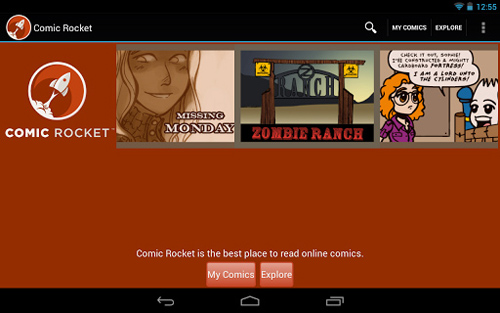 TOM: I think you are the first to accomplish this. Others have tried, but needed a Kickstarter to get the money up and running, and they unfortunately failed to raise the funds through no fault of their own, how did you fund this?

ANDY: Actually, we went the crowd-funding route as well. We raised funds to develop our app with Indiegogo. Comic Rocket has always been focused on meeting the needs of our users and creators and so we relied on the community to help us grow.

TOM: So this app is only available for Android platforms now?

ANDY: Yes, we developed for Android first because it was easier and familiar to us. Plus we had a developer that was immediately available. Luckily we started there because we ran into technology issues that were pretty tough.

TOM: When do you expect ios, and this will include iPhone and iPads correct?

ANDY: I hesitate to give an actual date because of the tough issues involved that we're working on. It's not a trivial port of the Android version. But it will get done this year and it will be for both iPad and iPhone.

TOM: How will you decide which comics to feature? I noticed larger type banners on the app illustrations on your website and they appear to be different than the standard banner, they are more square and box like in shape.

ANDY: Because the app is a mobile version of our regular site, all the comics that are featured there on the front page can be featured on the app. The boxes that you are talking about are a combination of comics our staff simply likes and a reward to the people that backed our campaign at a certain level. In the future there will be some interesting additions to that featured list. But keep in mind it's only seen by people that are not logged in yet so we use it as a sort of gateway to the rest of the great comics on Comic Rocket.

TOM: How will comics get noticed or is it all up to them to promote themselves in other words will you promote the app through various other media?

ANDY: We'll promote the app same as we promote our site through interviews, reviews, postings on places like Reddit and the occasional press release when we do something cool. It's neat to do a mobile app though because it opens up a whole new universe of sites and people we can promote to. Meanwhile, the comic creators that are listed on Comic Rocket should continue to push themselves on our site and everywhere just as they normally do. However, I should point out that we've just developed a new feature known as the Genie that empowers creators to measure and promote their sites even better than before.

TOM: How will you make money on the app? Is it free are there ads?

ANDY: As with our main site, the Comic Rocket Android app is free to download and use and the iOS version will be also. We don't plan to make any money from the app itself at all. There will be the same ads in the non-creator generated spaces as there already are on Comic Rocket proper though. But we're not about to try and make money from someone else's work, whether on the app or on the web. 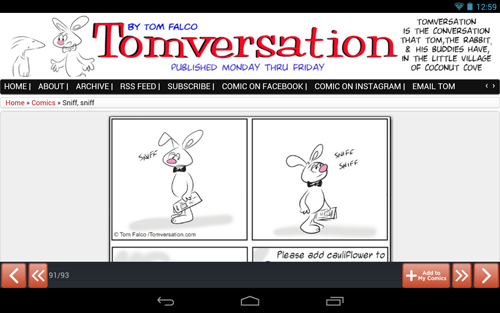 ANDY: Well sure, but not from our app. Since Comic Rocket always points directly to creators' sites, any ads they're running will still receive the traffic.

TOM: Can cartoonists pay to be promoted and featured?

ANDY: In a manner of speaking, yes. But not exclusively for the app. Creators can pay to run an ad in our ad network and it will be shown anywhere on Comic Rocket that we run ads (which is anywhere that we've generated the content.) We're still working out a fair model for promotion on our landing page other than just being a comic we like or a past supporter.

TOM: Are the comics shown right on the app or do people link through to the actual comic's website?

ANDY: We link to the comics we display rather than caching them on the device (which would take tons of space otherwise.) So, when a user reads a comic they are viewing it on the creator's site via the customized browser we built for the app.

TOM: How many comics are featured now on Comic Rocket and will all be featured on the app?
ANDY: Right now we have over 13,000 webcomics and serials indexed in our list. Comic Rocket's Android app uses the same database as the web version so users will be able to read all the same comics they would get with the desktop version.

TOM: Thank you Andy, it's been a pleasure and I'm quite excited to be a part of Comic Rocket myself. Again, the Comic Rocket app is only available now for Android devices, it's free and available in their apps store. The Comic Rocket website is available on all devices through the usual means. of course. 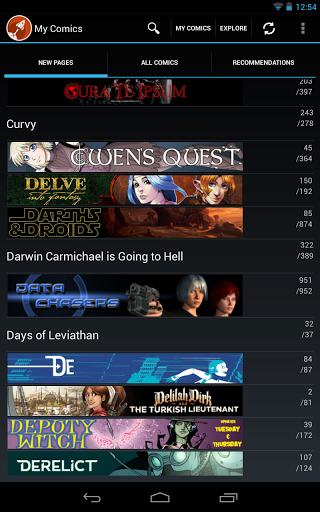