The Internet is destroying journalism, according to Internet journalist Joshua Micah Marshall, the award-winning founder of TalkingPointsMemo (TPM). In a Friday speech at a Harvard conference on the future of the web, Marshall said traditional reporters are "terrorized" by economic and competitive challenges, living with a mix of "denial and fatalism" about the future of their craft -- and their livelihoods. When openings for entry-level jobs are posted at Marshall's site, for example, he said applications come in from senior investigate journalists struggling to find a job. The industry changes are bad for journalists, Marshall argued, but good for journalism.

As traditional journalism breaks apart, a new form of open, interactive, networked and, most importantly, iterative reporting is thriving online. 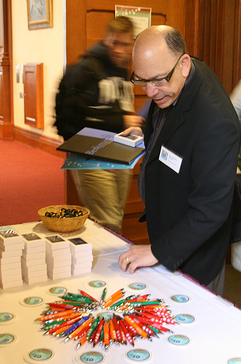 TPM is powered by an energetic band of readers and activists who participate in gathering news. Marshall calls it "intimacy" -- a collaboration between writers and readers -- and it clearly drives research, traffic and stickiness. In complex, long-term stories like the U.S. attorney scandal and the fight over privatizing social security, TPM tapped readers to gather information, interview congressional staff and upload evolving political intelligence. While readers may be motivated by policy or political goals, their work product can still be objective information. For social security, Marshall said readers built a better virtual list of politicians' stances than anything tabulated by the traditional media or the White House.

Open reporting can also diversify and democratize the sources that reporters use. Journalists come to rely on "professional sources," Marshall explained, both for expertise (they know something) and convenience (they know how to deal with the press and speak in quotes). Interactive media websites can draw on more sources with more niche expertise, even if they don't speak in quotes. So why should non-media people care?

I think this is good for public discourse because it can (slowly) shift authority from a small clique of connected experts to a larger universe of niche experts and informed participants. The modern spin industry embeds itself in all kinds of media via these "professional sources," along with think tanks, shadow groups and online astroturf. Open reporting can organically route around that spin. (Or at least make it more transparent and expensive, if people try to game comment sections.)

Finally, when asked by a conference attendee to define the new role he built, Marshall stressed that he is still a traditional "journalist." He just operates in a different landscape.

Ari Melber is the Net movement correspondent for The Nation, where this post first appeared. Check out the Net Movement Politics Facebook Group.