In one sense, female CEOs are kind of like shark attacks -- extremely rare, but so well-covered by the media we think they’re pretty common.

Executives vastly overestimated the number of women who are chief executive officers in a recent survey of 1,700 C-suite leaders around the world. The public relations firm Weber Shandwick worked with KRC Research to conduct the study, which did not survey CEOs themselves.

On average, respondents guessed that 23 percent of large companies around the world have female leaders. Women executives were even more misinformed -- guessing that 25 percent had female CEOs, on average.

Everyone was so far off the mark, you kind of wonder how these people even got promoted in the first place. There are only 23 female CEOs of Standard & Poor's 500 companies -- not even 5 percent -- according a tally by women's nonprofit Catalyst in April. Likewise, just 23 Fortune 500 companies are led by women. That’s a drop from last year, when 24 had female leaders. Just 8 percent of companies worldwide with revenues of at least $500 million have a female CEO, Weber Shandwick reported. 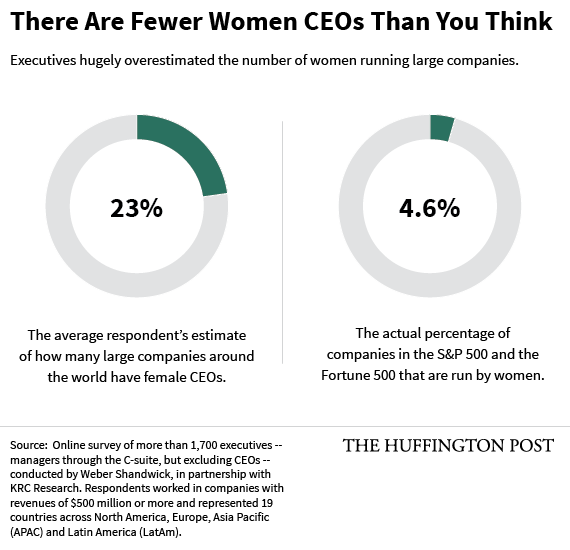 There are so few women CEOs that if you do a Google image search for “CEO,” the first woman to pop up is CEO Barbie, a fictitious doll that The Onion invented in its article "CEO Barbie Criticized For Promoting Unrealistic Career Images."

The disconnect with reality may reflect the media's obsessive coverage of female CEOs. Yahoo’s Marissa Mayer, for example, is a favorite of the business press, and it’s a rare week you don’t see her face on Business Insider’s front page. She’s also nabbed real estate in Vogue magazine and Vanity Fair. Last year, she was the subject of both an unauthorized biography and a related profile in The New York Times Magazine by Nicholas Carlson.

“There’s been tremendous coverage about women CEOs,” said Leslie Gaines-Ross, the chief reputation strategist at Weber Shandwick. “They’ve taken over in difficult industries. There seems to be a heightened interest.”

Mary Barra is the perfect example -- she runs General Motors, which ranks number six on the Fortune 500. That makes her the highest-ranking female CEO ever. She’s also leading the company through a turnaround -- GM has only recently emerged from bankruptcy and a recall crisis. Barra is a rare woman in a traditionally male industry.

Studies have shown that companies are more likely to bring in women and minority leaders during times of crisis, placing them on the so-called "glass cliff." Yahoo was in pretty dire straits before Mayer came on. Plus, struggling companies are more interesting to cover.

So, you take a rare female CEO, add in a “turnaround” story, and you get a disproportionate number of women leaders being covered by the media. Perhaps executives could be forgiven for thinking there are so many of them.

The new study also found that female leaders were perceived as more willing to talk to the press and more likely to feel comfortable doing it. “With so few women in the C-Suite, women at the top may find it difficult to stay out of the spotlight,” writes Weber Shandwick.

Executives were also pretty optimistic about the future for women CEOs. In 10 years, survey respondents said that they expect that 30 percent of companies will be run by women.

Yet a girl born today will be 81 years old before she has the same chance as a man to be a CEO, Phumzile Mlambo-Ngcuka, the executive director of UN Women, said in March.

Gaines-Ross pointed out one upside to executives' mass delusion -- it demonstrates a growing comfort with women leaders. There are many more women at the levels below CEO, to be sure. About 15 percent of C-suite execs are women -- and 51 percent of managers are women. “There’s a greater acceptance of female ceos,” she said.

Now, if only companies would actually hire them.