"Can I have your attention," a woman in a fluorescent yellow shirt called out at Dulles International Airport outside of Washington, D.C. "We have some very special guests coming through. They are veterans of World War II, Korea, Vietnam, Iraq and Afghanistan. Can you help us cheer them on?" 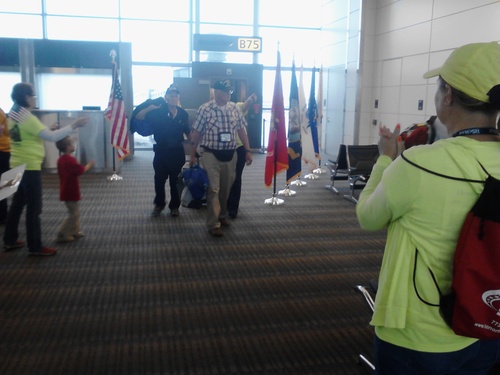 Within minutes, dozens of my fellow bleary-eyed travelers on a Sunday morning packed a nearby gate to cheer on the aged warriors as they came off the plane from North Dakota, in town for Memorial Day events. "They'll get a tour of the monuments, a special ceremony at Arlington National Cemetery, everything," a yellow-shirted man sporting a black Vietnam Veteran, Special Forces hat told me. More cheers erupted as Lee Greenwood's "God Bless the U.S.A." blared from a nearby speaker. "We've been doing this for ten years!" a younger woman with the same honorflight.org shirt with an American flag beamed. And like all the others there, I was proud to be an American. 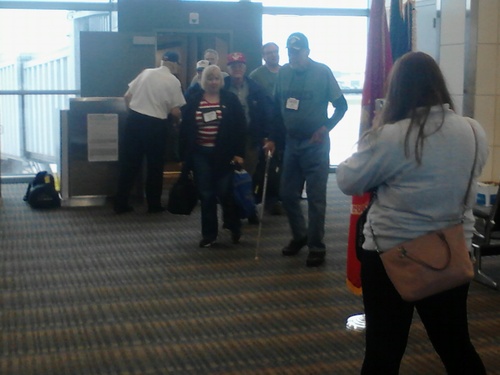 But I can't say that I'm as proud of how our veterans have been treated in the political arena, something that gets considerably less notice. It seems every year, fewer and fewer of the candidates that win political office (much less get nominated) have military experience. I remember shaking hands and chatting with former Nebraska Senator Bob Kerrey at our college's commencement address, proud to have met this veteran who won so much glory. His resume mattered once, but later that year, the Nebraska voters didn't feel the same way, stopping his political comeback.

None of the presidential or vice-presidential nominees from 2012 were veterans. How many of the 2016 candidates could say the same thing?

Being ignored at the ballot box is nothing compared to how they are treated by those assigned to protect them after their service. Remember when a laptop was stolen, the biggest data breach ever at that time, with names and personal information for so many veterans was lost? The laptop was recovered, but lost in that story was that the computer had been taken home so someone could put in a little extra work denying a whole bunch of claims for PTSD for veterans.

The treatment veterans received from Veterans Administration hospitals was equally bad. But now there's a proposal to privatize the VA. I can agree with privatization for a number of things, but profits should never been made on the backs of those who sacrificed so much to protect our country, giving up earnings as home to make so little abroad. Many need so much expensive work from their injuries. How much are they going to be required to pay?

I'm sure you're thinking "We'd never do that to veterans! Not when so many love them!" But who thought veterans would get such poor treatment in other ways? Their groups, like the Disabled American Veterans (DAV) and VoteVets.org are hammered for the positions they take, instead of getting a little credit for who the members are and how they serve. Even near where I live, a proposed site for rehabilitating veterans was blocked and only remote sites are being considered for this well-meaning project.

So this Memorial Day, find a way to honor the veterans with parades, visits to monuments and national parks where they are featured, and put a flower next to a gravesite of a fallen hero. And let's spend the other 364 days in the year fighting just as hard for them as they have for us!