Written by Maressa Brown on CafeMom's blog, The Stir

No matter what religion you were raised with (or without!), society tells us that the consummation of marriage right after a couple's Big Day will set off fireworks bigger than any Macy's Fourth of July Spectacular. Reality check: At least 25 percent of couples don't even have sex on their wedding night because they were too drunk or tired, according to a recent survey of 1,000 newlyweds by wedding stationary company Paper Shaker.

Judging from our own findings on the matter, that percentage may very well be a lot higher! And even those couples who did do the deed aren't ballyhooing it as their best time between the sheets by far! Thus, in an effort to not necessarily burst anyone's bubble about their wedding night but bust unrealistic myths about it, here are 15 sex confessions we got from brides about what their wedding nights were really like.

1. "My ex-husband sprained his ankle badly while drunkenly dancing with one of our bridesmaids to 'Cotton-Eyed Joe.' His parents came up to our hotel room later that night to check on him, because he was so swollen. Needless to say, the only moaning coming from our room was him ... moaning in pain!"

2. "My husband passed out from drinking on the bus ride to the hotel from the reception. I spent the night making sure he was okay and finally eating something after not eating all day."

3. "I guess that's the one advantage of having a dry, Mormon wedding -- we weren't too drunk to have sex!"

4. "We had sex, but I barely remember it, because I was hammered! Keepin' it classy."

5. "We got married in Vegas, so we had a great time at a club in our hotel. But after a whole night of dancing and toasting, we went back to our suite and passed out."

6. "We got into an argument, because a group of his friends got drunk since we had open bar and was being disruptive and rude and he thought I had asked them to leave our wedding. I didn't, [but] we spent our wedding night in separate rooms."

7. "My husband got drunk on champagne and the sex sucked, and he passed out right afterwards. I spent the night watching TV. We are divorced now."

8. "The first thing we did was climb on the bed (tux and gown still on) and opened all of our cards to count our cash. Then, ordered pizza. Even though we had a buffet at the reception, we were still starving. We ate pizza in bed while watching TV. We did NOT consummate our marriage that night. We were way too tired!"

9. "I was six weeks pregnant and sick as a dog, so we got through the courthouse wedding, suffered through my mother taking us out to dinner, went home and went right to bed!"

10. "I put on some lingerie in an attempt to look nice. My husband was more excited about opening the envelopes and counting the money from the checks. He said, 'Don't feel obligated to have sex.' We were too tired anyhow and went to sleep."

11. "We had a morning ceremony and breakfast reception, so we went home afterwards, I had a nap, then I had to work the night shift. How about that for romantic? Hah."

12. "We almost burned the B&B down! I threw his shirt over the top of a lamp, then later, we went out for dinner. When we came back, the shirt was scorched, and the room smelled like burnt cotton."

13. "I was exhausted and one of my bridesmaids came in our suite to make a sandwich. Her husband then wants a sandwich, and I finally get the dress off and am almost asleep when the groom wanted to celebrate our marriage. I'm pretty sure I slept through it."

14. "We spent our wedding night in the emergency room. Whoever set up the cake table didn't lock it in place properly, and it crashed on my foot."

15. "We got crazy drunk, but still managed to have a lot of fun getting it on. The next day we went [out] and came back to our room to find the cleaning service had been in the room to freshen things up for us and [put] all of our 'toys' in a pile by the bed and covered with a cloth. I about died of embarrassment thinking of the staff donning rubber gloves and pincer-grasping each item and placing them carefully in a pile!"

What was your wedding night really like? Would you guess the 25 percent stat is actually much higher?

More from The Stir:
Wedding Night Sex Isn't All It's Cracked Up to Be
What Most Couples Do on Their Wedding Night Is a Real Shocker
Married Couples Who Have Sex Less Than Once a Week Are in Trouble
12 Wedding 'Rules' Every Bride Should Feel Free to Break
'Morning After' Wedding Photos Make Marriage Look Sexier Than Ever 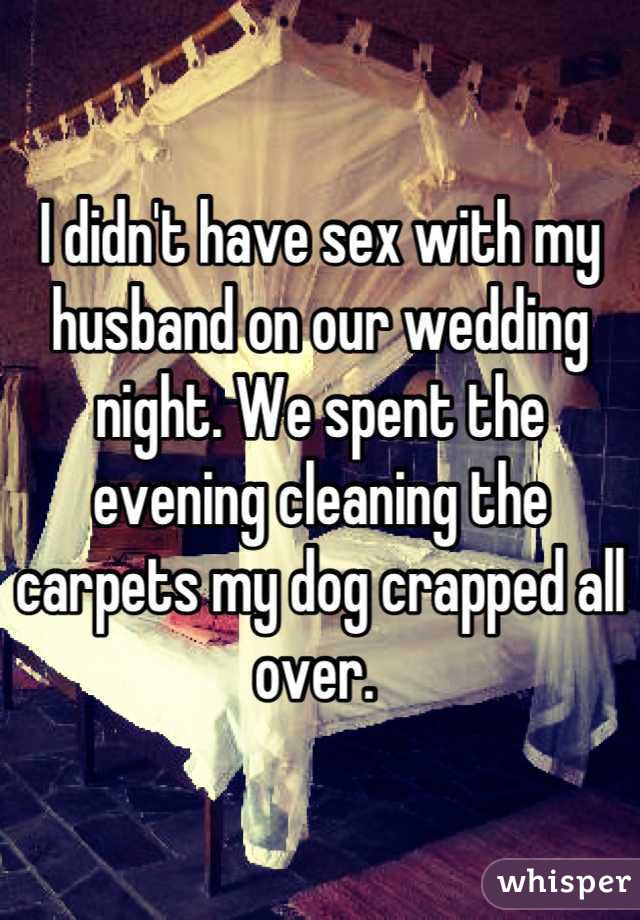