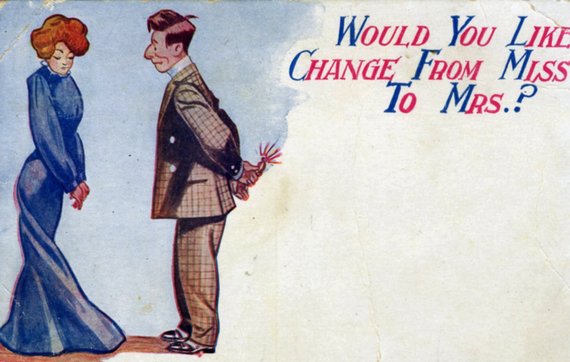 Would you propose marriage, or accept a proposal of marriage, by postcard? Not likely? Well, that wasn't always the conventional opinion.

As the 1800s gave way to the 1900s, postcards enjoyed their most vibrant period. People used them for everything, even for proposing marriage. In today's society of instant messaging, video chats, and social media reach, it's hard to imagine pouring your heart out on a postcard and dropping it in the mail.

We live in a time of hot-air balloon, skywriting, and crop circle proposals, and asking or accepting a proposal by postcard may seem small and nonpersonal. But as the following postcards show, big is not necessarily always better. From the heartfelt to the humorous, postcard wedding proposals are an intimate glimpse into the loves and lives of brides and grooms who have gone before us.

From 1861 to 1898, only the government could produce postal cards. But in 1898, private companies were granted permission by Congress to mass produce "Private Mailing Cards" that could be mailed via the postal service. The "Private Mailing Card" designation lasted only three years, until 1901, when Congress passed legislation changing that wording to "Post Card". Before 1901, messages could only be written on the front of the card, and the back was exclusively for the mailing address.

The following proposal acceptance from Pearl was mailed from Jacksonville, FL on September 4, 1901. We hope that Pearl enjoyed smooth sailing on her boat trip to her intended in New York City, but we can only wonder what butterflies she felt as she made that important voyage to her future with Mr. Willis A. Jersey. 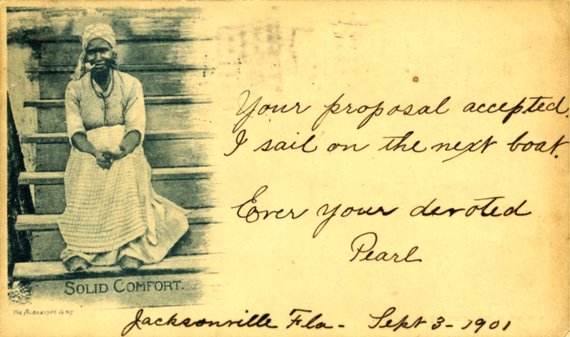 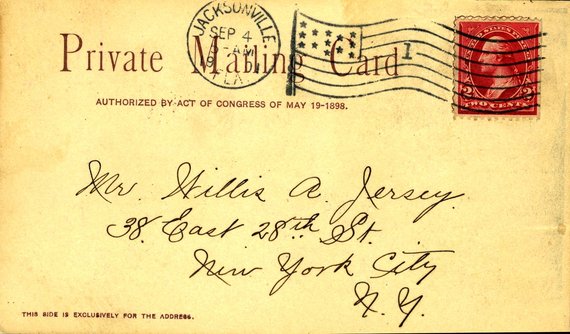 At the turn of the century, Elgin IL was home to the famous Elgin watches factory, as well as a large shoe factory, and the two businesses accounted for most of the employment opportunities in the Elgin community. But factory work is hard work, and a gentleman named C.L. used the escape from factory labor to bolster his cause when proposing to his beloved Martha. His proposal reads:

Dearest Martha,
Will you join my life, walk through the darkness with me, and be my tootsie for life? Then I will no longer sing that ballad "O gee, be sweet to me kid". I will take you from the shoe shop and you can live a happy and easy life forever and ever more.
Yours with both feet,
C.L. 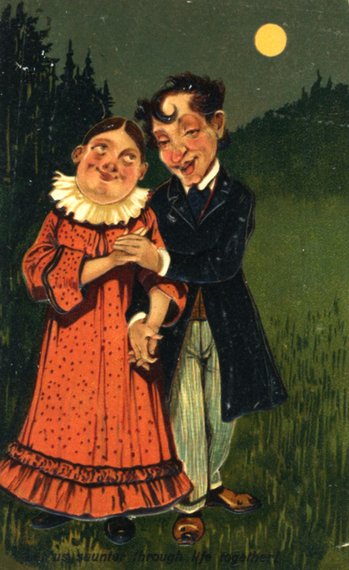 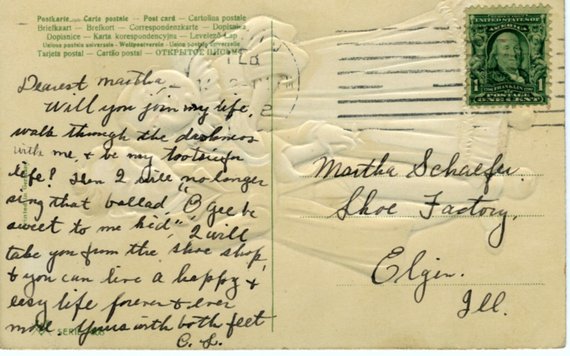 We can't know if C.L.'s closing "Yours with both feet" was a clever nod to Martha's occupation or just his declaration of unwavering commitment, but either way, it seems to be a perfect sign off.

Often times postcards were sent in envelopes for that added bit of privacy, or because the sender simply wrote too much on the card, leaving no room for an address. The following card from a Mr. Snyder, expressing how sweet he is on Olive, is one of those. It is filled to the brim with writing and could not have been mailed without an envelope. It begins with chitchat about a social gathering and ends with his plea.

Hello Dear Old Kid Olive,
Did you and your old friend get home safe? Well Olive, how did you enjoy yourself, did you have a good time, hope so, Dear. Well Olive I was up on Monday night to Alice Place and to see Oscar and Marion again, and played cards till after 2 o'clock. Ha Ha. Had a hell of a good time but missed you very much, Dear. Olive, Well, Dear, I am waiting your answer with a date you promised me, and gave me your hand you would, Dear. Please make it soon, Dear, as I sure have a love feeling for you, and Olive, try and come down over night and I will return with you. Dear, Please don't let anyone see this, Dear. Olive, Dear, with me at once, Dear.
A true friend,
Edwin Snyder
Doylestown, PA
XXXX 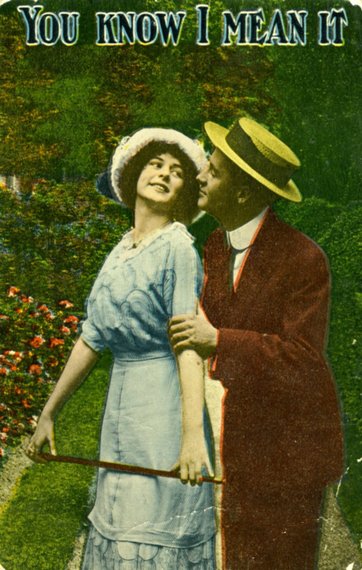 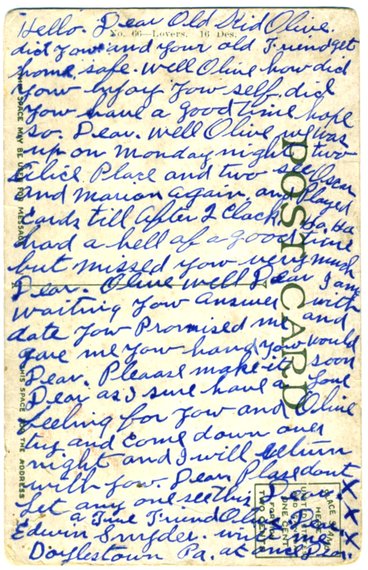 Okay, so Mr. Snyder may have had a bit of a "Dear" problem to go with his decided lack of grammar, but who cares? He poured out his heart, either asking Olive for a first date, or asking her to set a date for the marriage she had promised. Mr. Snyder is a bit unclear about what date he means, but his narrative does show that they already knew one another, had mutual friends, that he missed her when she wasn't there, and that he was eager to transform friendship into something far more significant. All of those "X" kisses at the end may be the telltale sign that this was about a "wedding date", and the YOU KNOW I MEAN IT on the front of the card, along with the warm touch of the depicted couple, surely helped Mr. Snyder get his love on the record.

In 1907 the postcard adopted the divided back, permitting a message on the left and the mailing address on the right. During this period, "real people" postcards became very popular. A special Kodak camera created photos that were then printed on a postcard template. The next card is one of those.

The gentleman, R. H. Wright, is wearing what may be a drum major's uniform. If so, it would be understandable that music would underscore his proposal. This postcard also has no mailing address and was delivered either in an envelope or by messenger. He wrote ever so sweetly and to the point, proving that romance doesn't need to be extravagant. It just needs to be sincere.

In reply to your card.

If music is the food of love
As it has been all thru life,
Look kindly on me from above
And say you'll be my wife 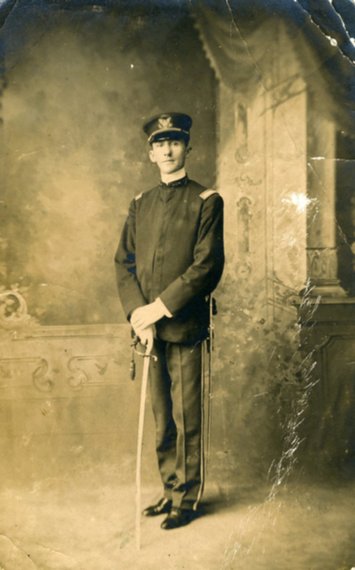 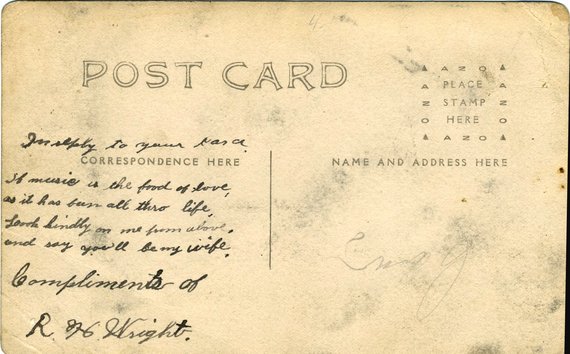 Then there is the woman with her eye on one Mr. Earl Pickard of Brooklyn OH. She spent her precious penny to send him the following six-word message: 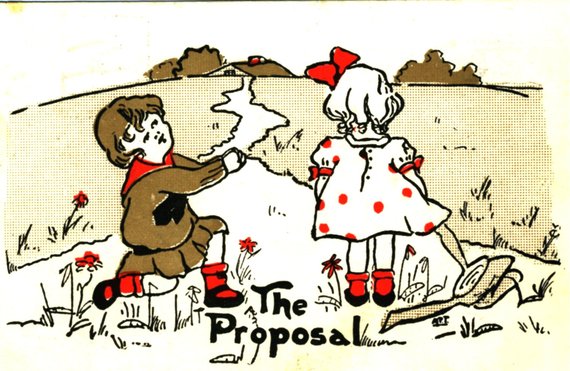 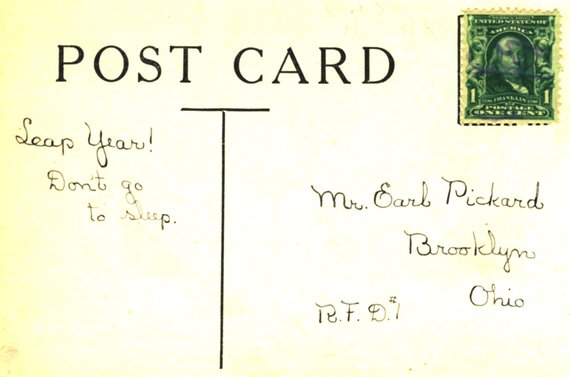 Well, at least she gave him fair warning!

As for the 1908 postcard at the top of this article, it was addressed and mailed to Miss Lizzie Lieffming of Wisconsin. But there wasn't a single word of message. Perhaps her suitor felt that the colorful wording - Would You Like Change From Miss To Mrs.? - on the face of the postcard said everything that needed to be said.

We shall never know if Lizzie said yes, and we can only speculate about what she imagined as the mail was delivered and she spotted the colors peeking out from among the bills of the day. Did she pull out the postcard with baited breath, frantically look in a mirror and lament that she hadn't combed her hair, as if the proposal was happening at her feet instead of by postcard? Did she rush to him and fall into his arms with her resounding "yes!", or did she, like Pearl above, simply shop for a postcard of her own to deliver her answer? Oh, if we only knew.

And finally, for those who wish for that match made in Heaven, but don't know what to say, there is the convenient option of a fill-in-the-blank proposal postcard. Just add a name, and you're good to go, as with this unused, ready-for-action, antique card. It comes complete with its own attached match, so the intended groom doesn't even have to look for one should he wish to don it in his buttonhole and say yes to "His Affinity". 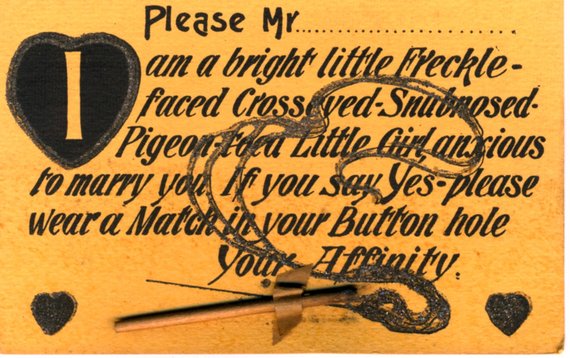 When all is said and done, how the proposal happens is far less important than the future it promises. But wedding proposals by postcard just may be due for a romantic revival...or...not.

Voting Made Easy
Register to vote and apply for an absentee ballot today
Register now
More:
weddingswedding proposalsengagements and proposalswedding traditions
Newsletter Sign Up
A weekly guide to improving all of the relationships in your life
Subscribe to HuffPost’s relationships email
Successfully Subscribed!
Realness delivered to your inbox