In a now infamously leaked email, Screen Gems President Clint Culpepper called comedian Kevin Hart a "whore" because he wanted him to use his huge social media following to promote Think Like A Man Too, and Hart wouldn't do it without being paid more money. Kevin politely responded in the press, "Knowing your self worth is extremely important people... I look at myself as a brand and because of that I will never allow myself to be taken advantage of." 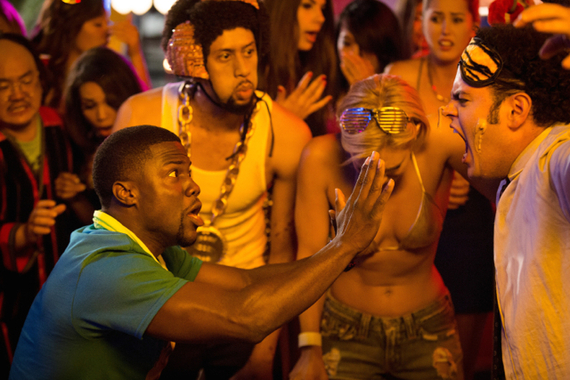 Culpepper was wrong. Hart isn't a "whore" he's just "prolific" and good at what he does. He pumps out three to four movies a year like he's a puppy mill. Single-handily he turns mediocre movies into comedy events. He earns his paycheck. Don't hate the player, hate the game!

Doug (Josh Gad, Thanks for Sharing) is a pudgy, four-eyed well-to-do businessman who has landed a dyed-blonde, gold-digging fiancée (Kaley Cuoco-Sweeting, TV's The Big Bang Theory) who is way out of his league. Their wedding day is two weeks away and the loser has no best man, no groomsmen and not one friend who'll accept an invitation to his nuptials. Someone pulls his coattails and turns him on to a professional "Best Man." Jim Callahan (Hart) is the proud, but clandestine owner/CEO of Best Man, Inc. He can rock a wedding with a phony, teary-eyed reception toast, hire fawning rent-a-groomsmen and supply a happy ending release.

Writer/director Jeremy Garelick (The Break Up) marks his feature filmmaking debut with this sketchy story that could go in either direction: ribald comedy, or flat formulaic bomb. He's got just enough of a plotline to sustain a 90-minute film. However, his movie runs 101 minutes. Surprisingly, he keeps the proceedings going at a nice pace and you don't get bored. In part, that's due to his nimble writing and direction. Also, his cast breathes life into the characters, interprets the dialogue with zest and knows how to work the sensitive moments, which are thoughtfully interspersed among the dull ones.

Garelick's filmmaking peaks in three key sequences: 1. A wedding dance scene with Gad and Hart doing their well-coordinated interpretation of "The Dougie." 2. A hard-fought tackle football game that pits Doug's arrogant, chest-pumping father-in-law (Ken Howard, TV's The White Shadow) and his geezer crew against Doug, Jimmy and the fake groomsmen ("They look like the cast of Goonies grew up to be rapists."). 3. A bachelor party that involves a Basset Hound, peanut butter and unprotected testicles. (Ouch! Don't ask, don't tell!)

Jenifer Lewis plays Jimmy's sage and sassy secretary, and her self-assuredness is comical and motherly. Jorge Garcia (TV's Lost), Affion Crockett (A Haunted House) and Aaron Takahashi, as three of the for-hire male entourage, raise a chuckle. Josh Gad goes toe-to-toe up with Hart on the dance floor and in every scene. Hart, with his usual impish charm, manhandles the dialogue, works the character into a frenzy and smiles in such an endearing way you want to give him all the money in your pocket. Gad and Hart have chemistry, but someone tell Gad, it ain't a real bromance. Hart is moving on to his next comic pairing, real soon. (Get Hard with Will Ferrell opens in March.)

The Wedding Ringer isn't innovative, but ultimately it's a crowd-pleasing movie. Hart, with his command of social media, will get fans in theater seats. Garelick's writing/direction coupled with the cast's high jinks will keep audiences laughing.

But folks keep in mind, though Kevin Hart is not a "whore," he isn't marriage material either. This is just a hook up. A comedy booty call. A pretty good one.