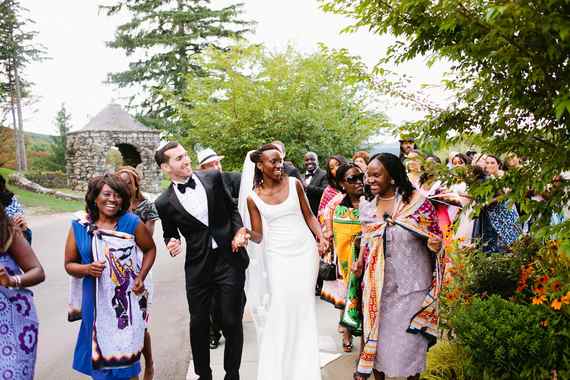 With weddings becoming more culturally diverse, it's up to couples to pass along a little tradition from their individual families to create traditions of their own all without compromising style. Culture plays a large part in today's wedding, and many brides may find it to be difficult to pay homage to their culture, especially if their significant other comes from a different background.

Whether choosing a white wedding gown for the ceremony and culturally significant attire for the reception or incorporating a ritual that respects both cultures, couples have endless possibilities to show respect for their culture and each other. These personalized moments are a thoughtful way to connect your families and guests.

I had the opportunity to sit down with one of my brides, Wangui Muigai, to discuss her nuptials and how she was able to seamlessly blend her Kenyan Jewish wedding on August 17, 2014 at The Garrison in the Hudson Valley.

Amsale Aberra: What is your cultural background?

Wangui: Kenyan. Both of my parents are Gikuyu, which is a Kenyan tribe.

Jaime: Jewish. His mother's family moved from Russia to Philadelphia in the early 1900s. His father's father was Protestant and his family was from Sicily, and Jaime's mother is Jewish and her family was from Alsace. His father grew up Jewish in an interfaith home.

AA: What fashion elements of your culture did you include in your wedding attire, and how did you modernize them?

WM: In July, the month before our American ceremony, we traveled to Kenya with both of our families and held a pre-wedding celebration in Nairobi. For that event, I wore a long cream dress and cream shoes with a Kenyan beaded necklace, and Jaime wore a suit, although we both changed into more traditional Kenyan clothes for some dancing during the celebration.

For the New York ceremony, we kept our outfits traditional American and classic in a way that reflected our personal styles. I wore a beautifully fitted Amsale dress and floral veil, with pearl earrings. Jaime wore a tuxedo from Indochino, and a kippah that a friend of his brought him from Israel (it's hard to find a small, knit version in the US).

AA: Were there any traditions or symbols that you incorporated into your ceremony or receptions to make it culturally significant? If so, what were they?

WM: Jaime held a traditional groom's tisch (Yiddish for table) - as guests arrived there was food and drinks and Jaime was around greeting guests and singing with them.

Our wedding venue already had a beautiful pergola that we used for the chuppah (traditional Jewish wedding canopy), and we had white cloth made in Kenya that we draped in the pergola to create the chuppah canopy.

AA: Were there any similar rituals or traditions between both cultures that were incorporated into the wedding?

WM: The Gikuyu and Jewish marriage ceremonials are deeply communal. Even beyond the uniting of two families, the wedding represents an event for the entire community. For the ceremony, in both of our cultures, there are traditions of having important elders speak during the ceremony. My eldest uncle, Sam, gave one blessing over the first cup of wine. In both the Kenyan and Jewish traditions, the first stage of the marriage is a betrothal that is sanctified over wine - in Gikuyu, this is called njohi ya ngurario, and in Hebrew, it is called erusin. The Gikuyu tradition is to use a ceremonial drinking horn and to offer blessings - called kurathimithia - for the couple. So we included Gikuyu and a Hebrew blessing over this first cup of wine, and drank it from a traditional Gikuyu drinking horn we brought back from Kenya. 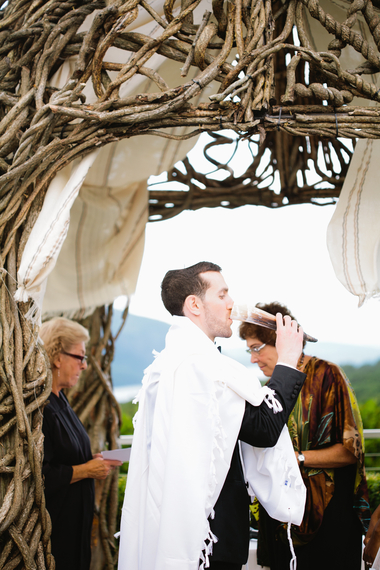 Jaime's eldest cousin Janet made a blessing over the second cup of wine. In the Jewish tradition, the final stage of marriage is also sanctified over a cup of wine. These final blessings are at the heart of the Jewish ceremony and speak to the joy and jubilation that a marriage brings both to the bride and to the groom, as well as to their extended families and communities. They reference the "cities of Judah and the streets of Jerusalem" and we added the "lands of the Gikuyu and the surroundings of Mount Kenya" into the blessing to encompass both of our culture's' central holy sites in the final wedding blessing.

We also wanted to continue to incorporate both of our cultures in the reception as well. We were so lucky that two of our best friends since childhood are now in a band together. My friend, Rachel Brown is the bandleader, and Jaime's friend Marcus Miller plays saxophone. They were able to adapt traditional Jewish wedding songs, and we kicked off the dinner portion of the evening with circle dancing - and of course, we were both lifted up on chairs - and then surprised both of our mothers by also lifting them up on chairs. Then after dinner, the dancing continued with our amazing DJ - DJ OP! - who incorporated Kenyan music into evening.

AA: If you could pick one moment, what was your favorite part of your wedding?

WM: Dancing! We loved dancing to the band's rendition of "For the Love of You" for our first dance, and having that transition into joyful circle dancing with our friends and family. So much fun.