If you're in the wedding industry, you may have caught the story floating around Facebook and Twitter about Anne Almasy, the wedding photographer from Atlanta who bought an ad in Weddings Unveiled magazine, only to have that ad rejected because it showed a photo of two brides. Not one bride. Not a bride and a groom. But two brides, marrying each other.

A friend of mine asked me, "Aren't there other publications who would be happy to advertise to the gay community?" And, you know, yes, I'm quite sure there are. But I chose Weddings Unveiled because I'm not trying to advertise to "the gay community." I'm advertising to couples who are getting married. This couple didn't get "gay married." They didn't have a "gay wedding." They got married. They had a wedding. They share their lives, their joys and sorrows, and all the mundane daily things that we all share with our partners. They are just people. In love. Committed to one another.

And that blog post is getting a lot of attention and shining light on this issue. Yes, the wedding industry is evolving to be more LGBT-inclusive. But we also have a very long way to go. Weddings Unveiled brought to light one of the most common questions I'm asked during my LGBT wedding trainings for wedding professionals: How do I market to same-sex couples without alienating my straight audience?

This is a legitimate fear that many in the wedding industry have. Clearly Weddings Unveiled is afraid of alienating their straight audience. They have a business. I get it. But the millennial generation, the majority of those planning weddings, overwhelmingly support same-sex marriage. In one study, 68 percent of American millennials supported same-sex marriage.

Many other businesses suddenly get all booked up when they realize they're talking to a same-sex couple. Others don't return calls and e-mails regarding gay weddings. This stuff happens all the time and I'm thrilled to see some press about it.

Because as Anne so beautifully said to Weddings Unveiled, "I hope you will see it through the eyes of history, for surely someday very soon your decision will seem archaic and absurd." 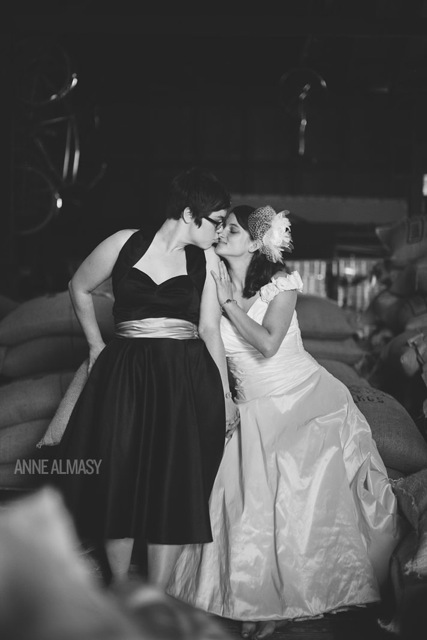