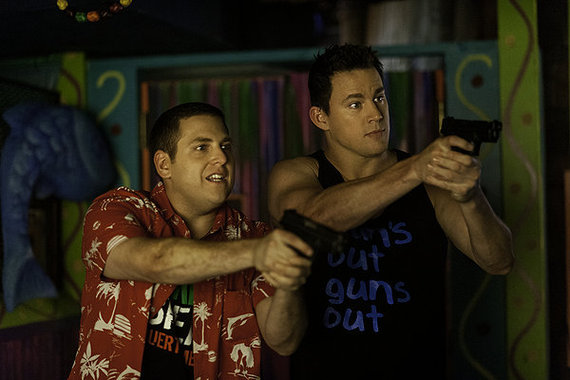 After I saw 22 Jump Street, I noted publicly that, while it was funnier than 21 Jump Street, so was my root canal. (Although the latter did include laughing gas.) Still, the bar wasn't particularly high.

So why is this film currently floating atop the Rotten Tomatoes chart with an approval rating in the 80s? Why, for that matter, did the original roll up an 85 on RT in 2012? I blame our public education system, but that's an argument for another time.

The point is that there is no point: 22 Jump Street is an at-best-mediocre comedy with a few more laughs than the limp 2012 film (which was based on the first original series to come out of the then-nascent Fox network in 1987). It is even more meta than the first film, which is not a compliment or a criticism, just a statement of fact.

No, on second thought, it is a criticism. Because, like irony and sarcasm, meta is a lazy form of humor, on par with stoned sophomore-year colloquies that devolve into a circular discussion: But if my life is a movie and I know it's a movie, am I the actor or the director? Or both at the same time? Or maybe it's a movie of a movie that I don't even know about.

Except 22 Jump Street, like so much contemporary comedy, isn't really about anything to begin with, except its own meta-ness. This includes several moments in which characters talk about how sequels tend to repeat the formula of the original, except with more of everything: action, gross-out humor, budget.

In this iteration, cops Schmidt (Jonah Hill) and Jenko (Tatum Channing) go back undercover as students, this time at a community college. Last time Schmidt got to be (for the first time) the popular one, while Jenko learned what it was like to be a nerdish outcast. This time, they're back to their lifelong roles (Schmidt: loser; Jenko: winner), while investigating another death attributed to a new synthetic drug.

There's a strain of homoerotic humor (that toys with the notion of homosexual panic) involving Jenko and new pal Zook (Wyatt Russell, son of Kurt Russell and Goldie Hawn), the quarterback with whom he bonds (making Schmidt jealous of this squirmy bromance). The best laughs in the film, however, belong to Jillian Bell, as a harsh-mouthed roommate of the girl Schmidt gets involved with. But a few go to Ice Cube as Capt. Dickson, superior officer to Schmidt and Jenko, when Schmidt's love life hits a little close to home for Dickson.

Really -- the self-awareness in the meta humor is dazzlingly superficial. It's on a level of: Look, we're making fun of the fact that we're making this movie. (Because that's never been done.) The fact that they further spoof their potential future sequels during the closing credits, unfortunately, doesn't inoculate them against, well, anything. Nor does it mean there won't be another in this lame series. There's too much money still to be made.

Drivel like Jump Street will draw a much larger crowd than it deserves. But the more cerebral and exciting The Signal ought to be seen by a mass audience, precisely because it is smart and thrilling, without ever really tipping its hand about just what game it's playing. It's smaller and will be harder to find, but it's worth the effort.