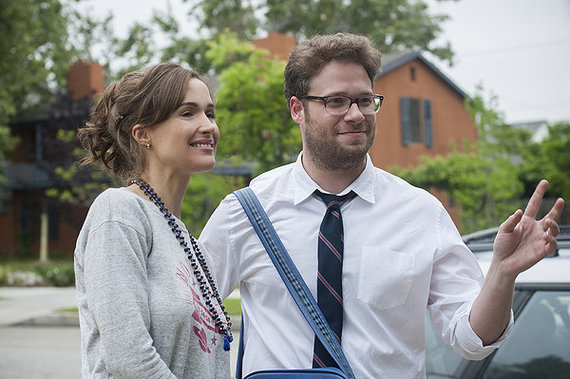 Neighbors may not be a particularly well-thought-out film (huge third-act problems). But it has some of the biggest sustained laughs of the summer.

The fact that the three biggest jokes are, in essence, penis jokes (one involves a used condom, so I count that) may have something to do with that. I admit it: I find jokes that graphically mock the male organ (and the homosexual panic that some men feel when in close proximity to one belonging to someone else) very funny. I probably always will.

Not that Nicholas Stoller's film hangs together; it gradually unravels, a victim of a serious plotting problem that's never solved. (I saw a piece online this week that referred to Stoller as an "unheralded comic genius." It obviously was written by someone who either lacks context or has come up with a new definition of "genius," one that lumps Judd Apatow into the "heralded" section of the comic-genius classification. Which, again, indicates a lack of perspective.)

The plot centers on a married couple, Mac and Katie (Seth Rogen and Rose Byrne, a pairing guaranteed to infuriate women who don't like Rogen). They've got a baby and a house with a mortgage -- which means they're worried that they're turning into old people. Which they're not; it's simply the scale-dropping-from-the-eyes moment when you realize you're an adult, not a kid.

That becomes even clearer when the vacant house next door is sold -- to a college fraternity, led by Zac Efron and Dave Franco. It immediately becomes Party Central, and suddenly Mac and Katie find themselves the oldsters yelling, "Hey, turn down that music!" at their younger neighbors. While they try to ingratiate themselves as adults who are hip to the young people, it quickly turns into all-out war.

The pranks, the wisecracks, the rudeness -- it's all fairly inspired, including the idea of Rogen engaging Efron in a dance-off (and, eventually, a fight). On the other hand, this is a movie that wants us to sympathize with both sides of this squabble -- but dramatic structure demands that there's a winner and a loser (and the facts of the case mean that the winner grabs victory by being the biggest jerk). There are few consequences (including the fact that no one else in this residential neighborhood of closely set houses seems to be bothered by the fraternity's outrageous antics) for either side.

But Rogen and Byrne have a deliciously odd chemistry and Efron proves that he can handle real comedy by playing straight. As I said, it's not great -- but it is funny. That excuses a lot.

I had similar mixed feelings about Jon Favreau's Chef, a return for the Iron Man director to his roots in personal (and small) film. OK, not that small: Here's an indy whose cast includes Dustin Hoffman, Robert Downey Jr., Sofia Vergara and Scarlett Johansson, among others. It's nice to have friends who'll do you favors.