After a weekend of heavy eating and drinking, most dieters probably don't like what they see on the scale come Monday. But a new study from Cornell University shows that weekend bloat can actually be part of a normal cycle of weight loss and gain over the course of a week, and can even play a role in more long-term weight loss.

In other words, it's nothing to worry about.

The new findings show that "weight loss occurs during the weekdays," Brian Wansink, Ph.D., the study's lead researcher and author of Slim By Design, tells HuffPost. "It's less important what happens during the weekends."

Researchers came to that conclusion after analyzing two different data sets of Americans and Finnish people who recorded their weight every day before breakfast. Eighty people were included in the study, and most of them entered their weights for close to a year, according to Wansink.

They then divided the subjects into three categories: weight losers (those who lost more than 3 percent of their body weight), weight gainers (those who gained more than 1 percent) and maintainers (in between -3 percent and 1 percent).

Wansink found that the majority of participants experienced their heaviest weights on Sunday and Monday, immediately after the weekend. 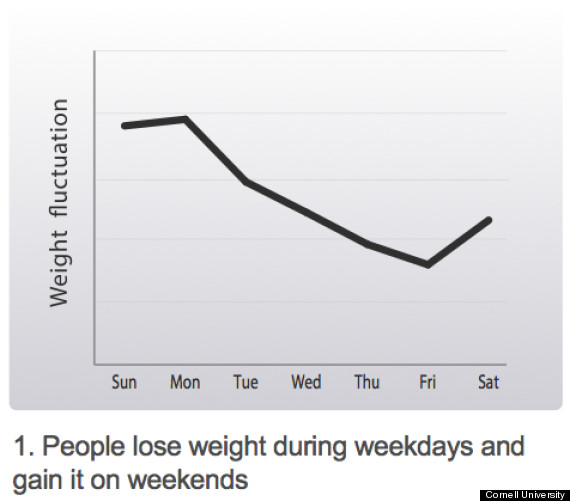 But people who were able to lose weight in the long-term had a "stronger compensation pattern" as soon as the weekend was over, managing to work their weights down to their lowest numbers on Friday -- just in time to start the weekend binge all over again. 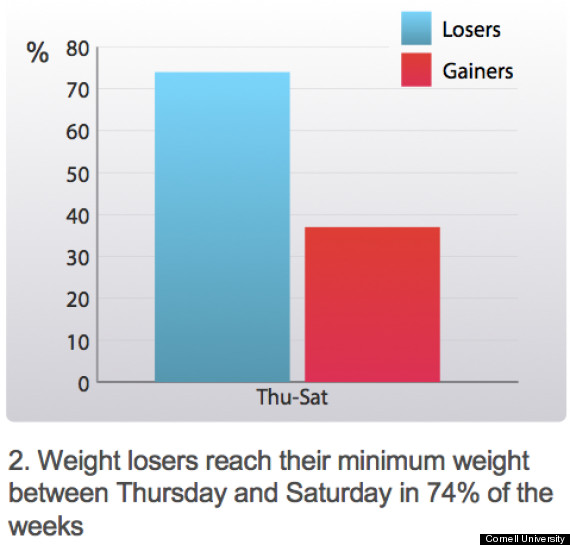 "The weekend is very unpredictable," said Wansink. "It has unusual meals, it has unusual time schedules, it has unusual celebrations." What makes weight loss possible, is when people recognize fluctuations and adjust to them. Weight gainers, for instance, still gained weight over the weekend but didn't lose enough during the workweek to make up for it. 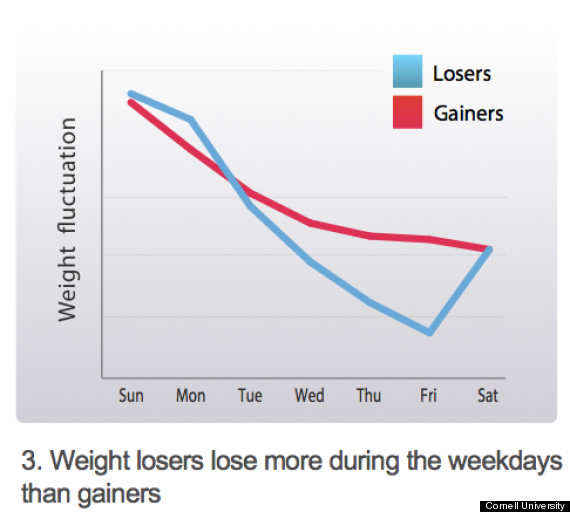 The study's findings could be an argument for cheat days or cheat meals, said Elle Penner, R.D., a nutritionist for the free weight loss app MyFitnessPal.

"I think this supports the idea that if healthy choices are made the majority of the time, it can counteract those indulgent meals or lazy days that we all have and enjoy," Penner said to HuffPost "It also reaffirms that successful weight loss doesn't require deprivation or strict adherence to dieting."

But because of the study's limitations, it's difficult to establish cause between weekend weight fluctuations and long-term weight loss.

"People trying to lose weight are generally more aware of how behavior influences their weight, which allows them to compensate for that during the week," Penner pointed out. "But in general, those long-term weight losers may have been able to maintain it because they allowed themselves those freedoms and had something to look forward to."

Wansink attributes the weight cycles to a behavioral pattern, and reasons that if American and Finnish societies had a six-day work week instead of a five-day one, weight loss and gain would adjust to the new one-day "weekend." He also wondered if a weight study that compared people with full-time jobs to people with part-time jobs would highlight more benefits of a regimented schedule.

But there could also be a biological reason for the weekly cycle of weight gain and loss -- and the leptin hormone could be at the root of it, said Gina Leinninger, Ph.D., an expert on the neuronal regulation of body weight at Michigan State University.

Leptin is produced by adipose tissue (fat) in the body, and the more fat one has, the more leptin is produced to help curb appetite and speed up metabolism. Leinninger said it was "reasonable" to think that short-term weight gain over the weekend could actually be part of the reason people lose weight over the weekdays.

"I think it's reasonable to suggest that if we do over-indulge on the weekend, as many are wont to do, it could account for slight incremental changes in adipose tissue, which would mean more leptin," said Leinninger to HuffPost. "Because leptin is meant to fine-tune our behavior, that slight increase could be sufficient to have that leptin go to the brain and suppress feeding again."

The bottom line for people trying to lose weight?

"Don't get discouraged after the weekend," said Wansink. "Weekdays are when you get stuff done, and it's time to get back to business."

To read more about the study, check out Cornell University's Food and Brand Lab.

Foods That Can Kickstart Metabolism
More:
healthy livingleptincheat meals
Newsletter Sign Up
An essential daily guide to achieving the good life
Subscribe to our lifestyle email.
Successfully Subscribed!
Realness delivered to your inbox